Trends in the medical workforce

The medical workforce has grown substantially in the past 15 years, with an average annual growth rate of 3.4 per cent between 2000 and 2009 (1).

Several workforce trends require careful planning over the next 20 to 30 years: rising numbers of women and part-time workers in some specialities: concerns that the supply of fully trained hospital doctors could exceed demand: and challenges in recruiting and retaining GPs.

Between 1960 and 2010 medical school places in the United Kingdom rose by more than 70 per cent from 2,000 to 7,889, with a subsequent increase in the number of doctors graduating from medical schools to 5,684 in 2008/9. Overall, the medical workforce has increased substantially; the number of hospital doctors alone increased by 30 per cent to 143,000 in the past decade (2,3).

This graph shows the level of investment in medical training, which rose sharply from 2000 and has levelled off in recent years. The number of female medical students has grown considerably over this time period, and they now make up more than half of all medical students. This trend is expected to contribute to the rise in female doctors, as they qualify and move into postgraduate training and employment. 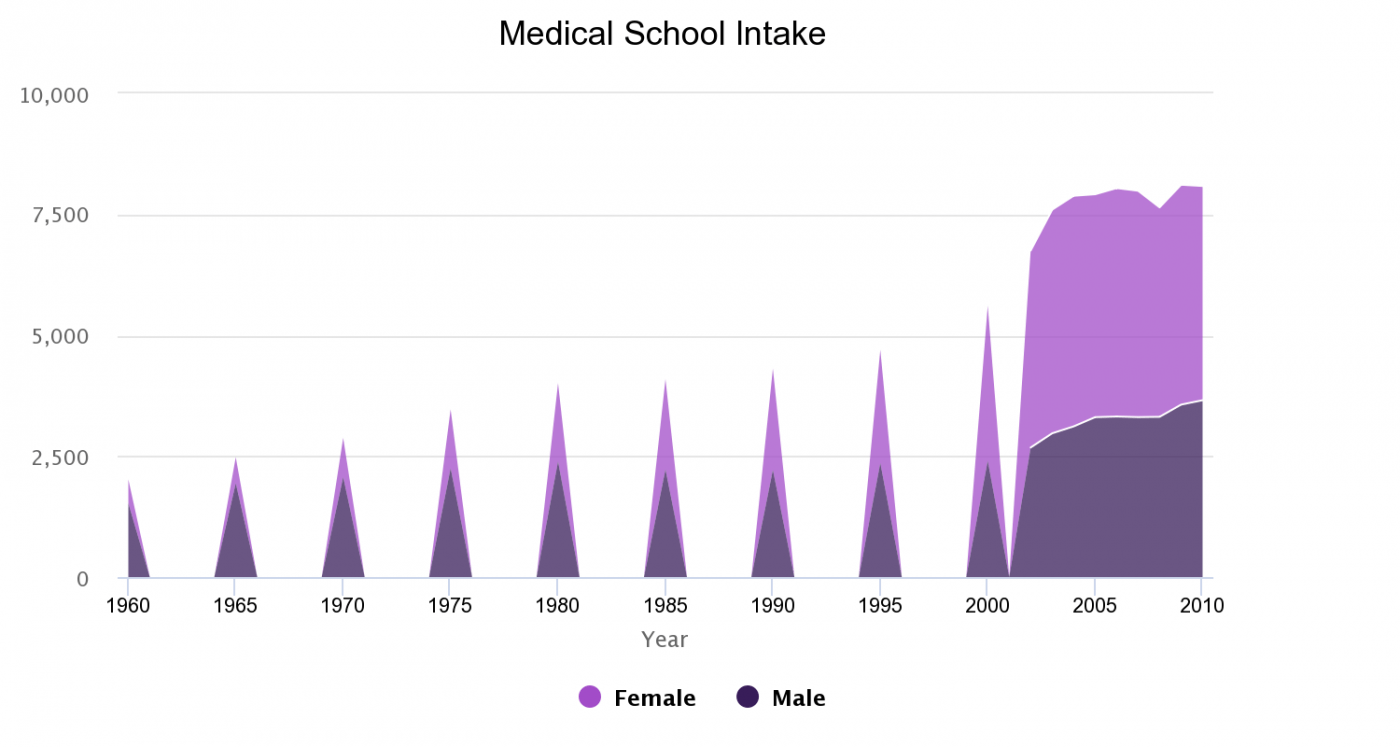 Source: Centre for Workforce Intelligence (2012). Report. Shape of the Medical Workforce: Starting the debate on the future consultant workforce

Current trends suggest there could be 2,800 excess hospital speciality trainees at consultant level by 2020, adding £2.2 billion to pay costs if they were all appointed as consultants  at current rates (4). At the same time, more doctors are choosing to take non-consultant grade posts, which could mitigate this risk if it continues.

The changing nature of primary care and demographic pressures indicate that more GPs will be required by 2035 to meet a doubling of the number of GP consultations (5). These challenges could be overcome if, for example, the trend towards part-time and flexible posts continues and proposals granting trainees greater freedom to switch specialities redirects more hospital trainees towards general practice (6).

The supply of GPs is under growing strain as the workforce ages.

At the same time, the proportion of medical trainees choosing to enter GP specialty training has fallen in the past two years and salaried GPs (who tend to work part-time) increased by a factor of 10 between 2000 and 2010  to 8,700 (5).

In 2011, 43 per cent of all doctors in England were female, exceeding 100,000 for the first time with numbers increasing at a faster rate than male doctors. Women are expected to outnumber men at some point between 2017 and 2022, accelerating demand for flexible, part-time and salaried posts raising the prospect that more doctors may be required to provide care in future years (7,8).

Future scenarios for the consultant workforce

The number and composition of the consultant workforce is likely to have a substantial impact on the way health care is delivered over the next 20 years.

The NHS is heavily reliant on trainee doctors, but concerns around quality of care and calls to move towards the provision of consultant cover seven days a week have prompted a review of this model of care (9). Growing numbers of doctors-in-training are expected to increase demand for a finite number of positions at consultant level, while changes to pension arrangements may prompt doctors to work beyond retirement age, further reducing the number of available consultant posts.

As part of this debate, the Centre for Workforce Intelligence have developed a set of ‘what if?’ scenarios modelling the effect of various changes to the current system by 2020.

The King's Fund's adaptation of data from Centre for Workforce Intelligence.

Next page: Non-medical and nursing workforce