Adult obesity rates are rising and driving an increased risk of chronic disease.

Obesity presents a major threat to health. It is associated with an increased risk of diseases including diabetes, heart disease, osteoarthritis and cancer.

The table below indicates the extent to which obesity increases the risks of developing a number of diseases relative to the non-obese population. The relative risks are based on a comprehensive review of international literature that was carried out by the National Audit Office, to provide the best estimates that could be applied to the English population (2). 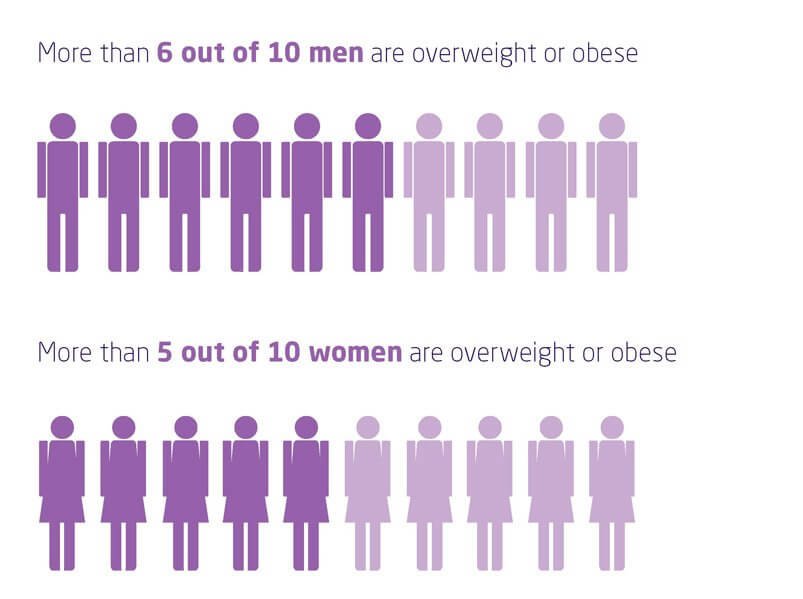 Obesity rates vary across the country and are higher for women in lowest income quintiles. There is a distinct north-south divide (1).

Changes in the food system, including reductions in food preparation time, are thought to be one of the major drivers of the global obesity epidemic over the past 40 years (3). 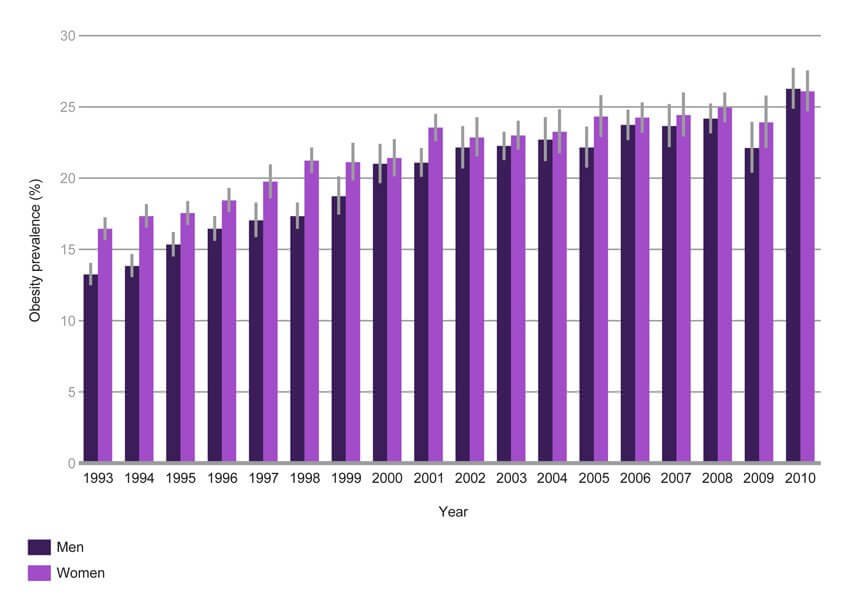 After rising steadily since the early 1990s, rates of childhood obesity are stabilising.

In 2010, Stamatakis et al used childhood and adolescent obesity trends from 1995 to 2007 in England (from the Health Survey for England) to project growth in the prevalence of childhood obesity. Their report projects that by 2015, obesity prevalence will be 10.1 per cent for boys and 8.9 per cent for girls (aged 2-10) and 8 per cent in male and 9.7 per cent in female adolescents (aged 11-18) (7).

Recent trends in the United States show that the proportion of teenagers with pre-diabetes or full-blown type 2 diabetes has more than doubled in recent years although the prevalence of childhood obesity is levelling off. This raises concerns for England (5). 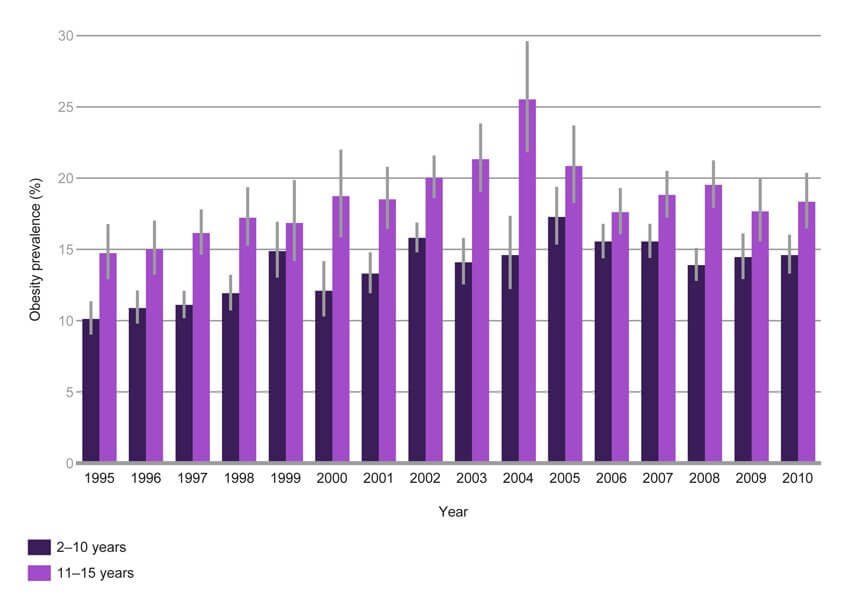 Parental BMI is also a very significant indicator and driver of children’s BMI. 24 per cent of boys aged 2-15 living in overweight/obese households were classed as obese compared with only 11 per cent in normal/underweight households. Equivalent figures for girls classed as obese were 21 per cent and 10 per cent (8).

For more on young people and trends in health, see our pages on alcohol, smoking, drug misuse and sexual behaviour.

There has been variable progress in improving population diet.

While the number of children eating the recommended amounts of fruit and vegetables has increased in recent years, 80 per cent of children still do not eat the recommended '5-a-day'. Adults also showed an improving trend until 2006, when numbers began to fall and 70 per cent of adults still do not eat the recommended amount. There is a relationship between consumption of fruit and vegetables and income quintiles, with consumption increasing as income increases as the graph below shows. 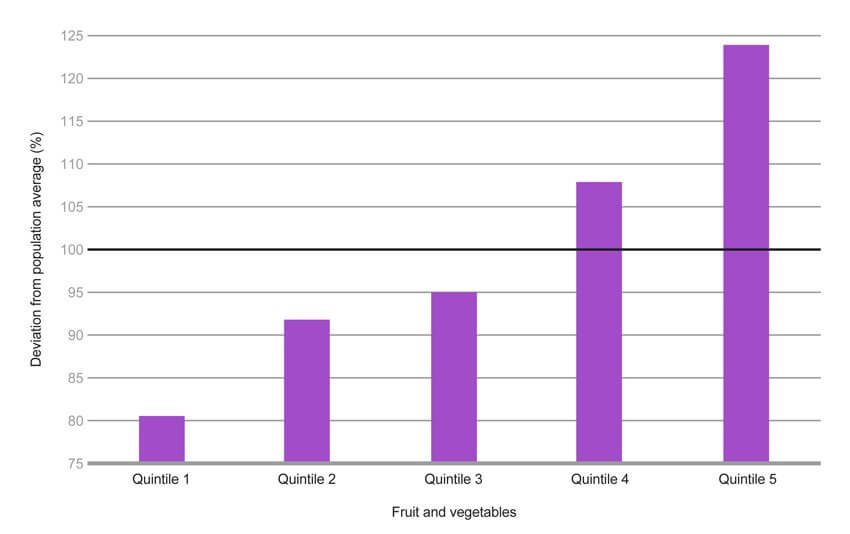 The population is currently eating too much fat, sugar and salt, and not enough fruit, vegetables and fibre, although those in high-income groups are consuming more fruit and vegetables than those in low-income groups. This pattern is unlikely to change without some significant incentive or regulatory change.

Quality of the current population diet 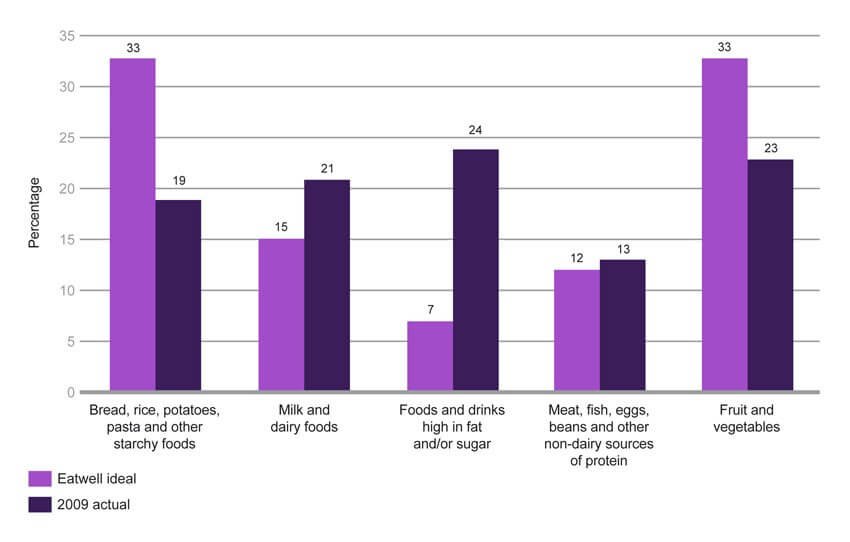 More people are physically active than 10 years ago; however, the proportion is still very low in the population. The current levels of inactivity in the population present a major threat to public health.

Staying active and exercising regularly is key for a healthy life. People who exercise regularly are likely to have improved functional and cognitive health. Estimates suggest that in England physical inactivity causes 10 per cent of heart disease, 13 per cent of type 2 diabetes, 18 per cent of breast cancer and 17 per cent of all mortality (9).

The Health Survey for England (2007) showed that many people are unaware of the recommended minimum levels and see themselves as relatively active. Lack of time and work commitments were cited as the main barriers to increasing physical activity (10).

Current government recommendations for adults are for at least 30 minutes of at least moderate activity, either in one session or in multiple bouts of at least 10 minutes, on five or more days each week. In 2008 (most recent data), 61 per cent of men and 71 per cent  of women aged 16 and over did not meet the recommendations, compared with 68 per cent and 79 per cent respectively in 1997 (11).

Government recommendations for children and young people are for a minimum of 60 minutes of at least moderate activity each day. In 2007, 72 per cent of boys and 63 per cent of girls met the recommended level, compared with 70 per cent and 61 per cent respectively in 2002 (9).