This short briefing gives an outline of GPs' role in commissioning in England to date and highlights evidence from The King's Fund and others on the impact of different commissioning models.

Commissioning is the planning and purchasing of NHS services to meet the health needs of a local population. In England, commissioning is primarily carried out by 152 primary care trusts (PCTs), which in 2009/10 received £80 billion (more than 80 per cent of the NHS budget) to purchase care for an average population per PCT  of 300,000. The coalition government is planning to abolish PCTs and give responsibility for commissioning of most NHS-funded services to new clinical commissioning groups (CCGs).

How has commissioning been carried out previously?

The idea of commissioning as a discrete function within the NHS dates from 1991. Before this, local health authorities organised both the planning and the delivery of services for their patients.  In 1991 the Conservative government split this function by creating 'purchasers' and 'providers' in the local health system (NHS and Community Care Act 1990). It created two models of commissioning – one based on health authorities, and the other based on general practice.

Under GP fundholding GPs held real budgets with which they purchased primarily non-urgent elective and community care for patients; they had the right to keep any savings and had the freedom to deliver new services. The aim was to give GPs a financial incentive to manage costs and to apply some competitive pressure to hospital providers. Some GP practices came together in consortia, creating larger organisations to pool financial risk and share resources. From 1994 the total purchasing pilot scheme (TPP) allowed general practices – either individually or in groups – to commission all services for their patients, though most were highly selective in what they chose to purchase. TPPs acted as sub-committees of health authorities and used an indicative, rather than a real, budget.

The Labour government abolished GP fundholding in 1997 but retained the purchaser/provider split. Health authorities were replaced by primary care groups and then by PCTs. In 2004 the government announced a new form of GP commissioning – practice-based commissioning (PBC). PBC was not compulsory: practices chose to participate are given an indicative budget by their PCT along with data on the volume of services their patients are using, in for example, accident and emergency departments or as hospital inpatients. GPs are allowed to plough back an agreed share of the efficiency savings they make into developing new services.

What is the government proposing in the Health and Social Care Bill?

Under coalition government proposals, all general practices will be required to become members of a clinical commissioning group that will hold real budgets and commission the majority of NHS services for their patients (including elective hospital care, rehabilitative care, urgent and emergency care, most community health services, and mental health and learning disability services). A new NHS Commissioning Board (NCB) will calculate practice-level budgets and allocate these to CCGs. The NCB will hold CCGs to account for contractually defined quality standards and patient outcomes, and will retain responsibility for commissioning some services including maternity care, dentistry and ophthalmology.

The table below outlines the key features of models of commissioning by GPs in England to date, including the latest proposals. 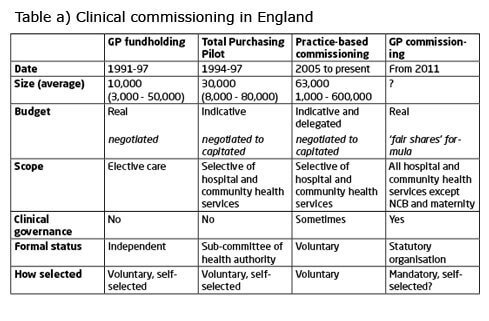 What was the impact of previous commissioning initiatives?

There has never been a consensus on the real impact of GP fundholding on the cost and quality of care. A review of the evidence published by The King's Fund in 1998 found that fundholding created high transaction costs and a two-tier system in access to care, with different access for patients of fundholders and non-fundholders (Le Grand et al 1998,). The rise in prescribing costs was initially lower in fundholding practices than in non-fundholding practices, but that difference appeared to be short-lived and there were no real differences in referral rates between the two. There is, however, evidence that fundholding GPs achieved quicker admissions for their patients, who therefore experienced reduced waiting times, (Dowling 2000; Propper et al 2002 cited in Smith and Goodwin 2006).

A 2001 study indicated that the overall impact of the national TPP was variable and achievements tended to be small-scale, local and incremental, though some were able to alter their patients' emergency use of hospital services by providing alternative forms of care. Pilots increased the costs of running the local health system – the larger the size and scope of the pilot, the more time was needed to establish management systems before progress could be made against objectives (Mays et al 2001).

Evaluation of practice-based commissioning indicates that it has had little impact in terms of improving use of resources or providing better services, and examples of initiatives attributed to PBC tend to be small-scale local pilots (Curry et al 2008). GPs have found it hard to find time to engage with PBC, and a recent survey of GPs found that 80 per cent felt they lacked some or all of the necessary skills to be an effective commissioner (Curry and Wood 2009). Slow progress has been attributed to a lack of clear financial incentives and cumbersome bureaucracy in PCTs' approval of business cases (Curry et al 2008, House of Commons 2010, Smith et al 2010).

In addition to evidence based on historical experience, some research has examined barriers to and facilitators of effective commissioning in general practice. Some key factors identified are:  overcoming particular barriers to implementation, such as the national impact of NHS reorganisations; establishing commissioning at an appropriate level for the services being commissioned; securing clinical involvement in commissioning; developing capacity for commissioning, including providing resources to secure people with relevant skills (see Curry et al 2008 p8).

There is also some relevant international evidence: in the United States physicians can already form organisations – either as medical groups or as independent practice associations (IPAs) – which hold real budgets to commission care for defined groups of patients. Key lessons can be learnt by the NHS from these organisations, including the high transaction costs that fundholding can entail, the real financial risk that needs to be managed, and that groups should be accountable for quality and patient experience, not just cost. It is important that adequate resources are available to consortia to support management expertise – GP budget holders need access to strong management support and information to ensure that they use their resources effectively (Ham 2010, Casalino in Smith and Thorlby 2010).

Questions for the future

Although GP commissioning has existed in England for 20 years in various forms, it has never achieved universal coverage.  However, the research evidence highlights some questions that need to be considered:

The reforms set out in the health White Paper Equity and Excellence: liberating the NHS are intended to 'liberate professionals and providers from top-down control' and to locate the headquarters of the NHS 'in the consulting room and the clinic'.
Video

Chris Ham gives an overview of the government's plans for GP commissioning and spells out The King's Fund's response to the NHS White Paper in this exclusive video.

The regulation of health care in England

This short briefing describes how regulation of health care organisations (rather than of health care professionals) in England has developed and outlines how the coalition government is proposing to change the current structure.

What progress has been made around effective GP involvement in commissioning? This report from The King's Fund and the Nuffield Trust assesses what has been learnt so far and makes recommendations for the future.

Clinical commissioning groups (CCGs) have secured better engagement from GPs than previous forms of commissioning but still face numerous barriers to putting power in doctors hands, according to a new report published by The King's Fund and the Nuffield Trust.

Co-commissioning: a new relationship between GPs and their CCG