In 2010/11, just 5 per cent of NHS trusts and foundation trusts in England overspent their annual budgets. By 2015/16, two-thirds of trusts (66 per cent) were in deficit as a slowdown in NHS funding took its toll.

The 2015 Spending Review provided additional ‘sustainability and transformation’ funding for the NHS. This contributed to a fall in deficits – though 46 per cent of trusts still overspent their budgets in 2018/19.

The 2019/20 NHS Improvement annual accounts show that the number of trusts reporting a deficit halved1 from 107 in 2018/19 to 53 trusts in 2019/20, leaving slightly more than one-quarter of trusts in deficit by the end of the year and meeting the target. The provider sector overall ended the year with a net deficit of £910 million.

For an in-depth analysis of NHS finances, see our Quarterly monitoring reports.

The deteriorating state of the NHS estate

Each year, NHS provider trusts survey their estate and estimate the costs of restoring buildings and equipment to mandatory standards. Today’s data for 2018/19 shows more investment is needed to tackle the rising backlog of maintenance issues.
Long read

Does the NHS really have a new strategic health infrastructure plan?

Following the launch of the new health infrastructure plan, Siva Anandaciva considers the potential implications and limitations of this new funding. 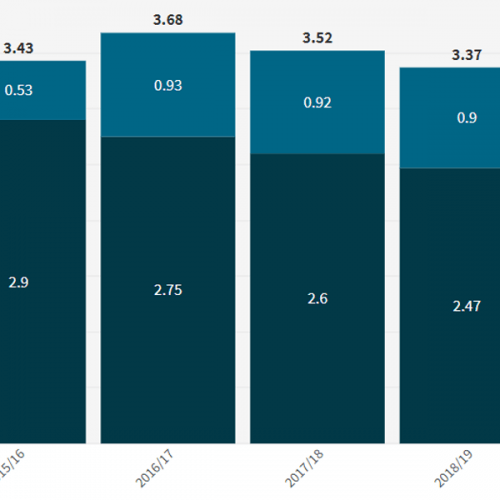