What are the fundamental challenges facing policy-makers who want to see the widescale adoption of effective digital technology in the health and care system? Last month, I went to the European Health Policy Group’s (EHPG’s) meeting in Bologna1 to discuss this. The EHPG is a group of researchers and policy-makers from Europe and the United States who meet twice a year with the aim of stimulating comparative and multidisciplinary analysis of health systems.

These challenges are the same facing England’s nascent and high profile NHSX. It was soft-launched in April, with Matthew Gould named as its new Chief Executive, officially starting work in July. It brings together under a new banner the different parts of NHS England, NHS Digital, and the Department of Health and Social Care that cover important digital policy areas. We’ll hear from some key players moving to NHSX, as well as Matt Hancock, at our Digital health and care congress this week, along with several examples of implementation of digital technology in the NHS.

It’s important to understand what NHSX is: a new vehicle for unifying tech policy-making and national leadership, which has historically been very fragmented, within a department led by a very interested Secretary of State. And more importantly, to understand what it isn’t: a new arms-length body. Nor is it (yet) the source or recipient of any new technology funding, at a time when the adequacy of previous technology funding is subject to lively debate ahead of a Spending Review later this year.

So, what did the international perspectives heard at the EHPG meeting tell us about the challenges facing NHSX?

It’s important to understand what NHSX is: a new vehicle for unifying tech policy-making and national leadership, which has historically been very fragmented.

We heard that the vast majority of the challenge of adoption lies in the complex and hard-to-predict interactions between people, organisations and technologies. It’s something that can’t be done centrally or directed from the top, but rather only achieved and then reproduced every working day by digital leaders and the staff out in local areas. We explored how some big projects in the NHS overcame some of the challenges in our Digital change in health and social care report last year and those insights remain relevant as NHSX begins to dismantle some of the barriers that need to be addressed centrally.

But what are NHSX to do if the work to lead, spread and sustain changes happen at the ‘edges’ of the NHS network, far from this new central hub? Rather than being a crack team who descend on trusts to tell them what technology to use and how to use it, they hope to solve some problems with co-ordination and market failures in the supplier market in line with the department’s vision for digital, data and technology.

The department frames its approach as ‘getting the basics right’ – fixing and developing basic infrastructure, enforcing standards. This is welcome. We heard at the meeting how the basics of digital infrastructure – devices, core software, network connections and data sharing standards, for example – need to be in place and working well to take advantage of the most exciting and optimistic parts of the digital agenda, such as implementing artificial intelligence, that depend on this strong foundation. Most countries are far from having those basics in place across their health systems. The NHS in England seems no different in this regard.

It remains to be seen if NHSX will start to offer different or more intensive support in how to implement technology to leaders and organisations through the provider digitisation programmes it inherits. But it does look like they will be key decision-makers on future bids from providers for substantial investment in digital technology.

Too often we think of digitisation as synonymous with automation, and we ignore the invisible work it requires to unlock many of its benefits.

The other major theme from the meeting was how much of the work done in systems’ digital health infrastructure is invisible and little recognised. To identify some: the work of internal and external developers; the work undertaken by IT teams to deploy and maintain technology; the work of clinicians and other staff in generating data for health systems in digital, clinical and administrative records; the work of analysts in making that data useful; and how managers and boards work to understand and act on all of it.

Too often we think of digitisation as synonymous with automation, and we ignore the invisible work it requires to unlock many of its benefits. We tend to imagine digital technology makes someone’s job redundant or easier. But anyone who’s experienced digital change in the NHS knows that the reality is usually less straightforward and gains take time to be realised.

International evidence is continuing to show us this too. The debate linking clinical burnout to heavy electronic records use in the United States should give NHSX pause for thought as it develops the existing provider digitisation policy beyond the digital exemplar programme. Despite the differences between the US and UK health systems, given what know about how much pressure the workforce is under this is worth tracking closely. NHSX might well start to think about measuring some of these more basic aspects of the realities of new technology.

NHSX is now positioned as the only player in town when it comes to digital health policy-making in England. To me, the lessons about basic infrastructure and invisible work involved in digital change mean NHSX’s centralised policymaking needs to be matched with more funding for providers’ basic infrastructure and to bolster the numbers and skills of the people involved in the often-invisible work of implementing digital change.

One of the simplest ways of ‘getting the basics right’ is to adopt blockchain technology to healthcare.

Having worked for the NHS for 25 years I left to set up my company to address this very issue.

My fear is that NHSX is not ready for this kind of innovation. That said we do have a pilot site to launch in one inner London CCG area.

I would be interested in finding out both the Kings Fund and our SOS’s views on this. 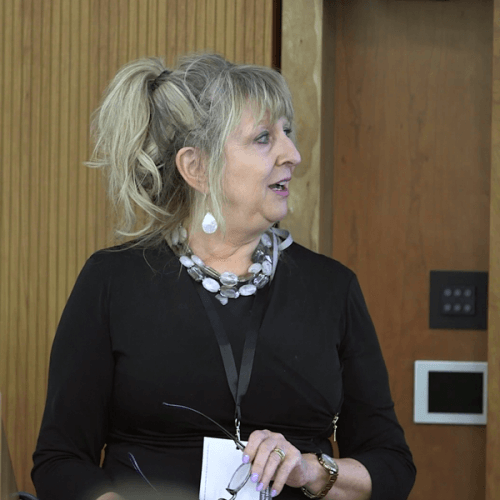 In this session at the Digital health and care congress 2019, Fran Draper shared practical advice on tackling information sharing at scale, including how to productively work with a wide range of partners across health and care.
Report

Financial pressures and growing demand mean that health and social care services will need to work differently. This report reviews how technology in the NHS estate is currently being used, and imagines how the 'estate of the future' might look.
Long read

On 7 January, the NHS long-term plan was published setting out key ambitions for the service over the next 10 years. In this explainer, we set out the main commitments in the plan and provide our view of what they might mean, highlighting the opportunities and challenges for the health and care system as it moves to put the plan into practice.
Free event