England has an outstanding record of achievements in HIV prevention, treatment and care. Increasing numbers of people with HIV have normal life expectancy, so there are now more older people living with HIV who may have other care needs associated with ageing (see Figure 1). 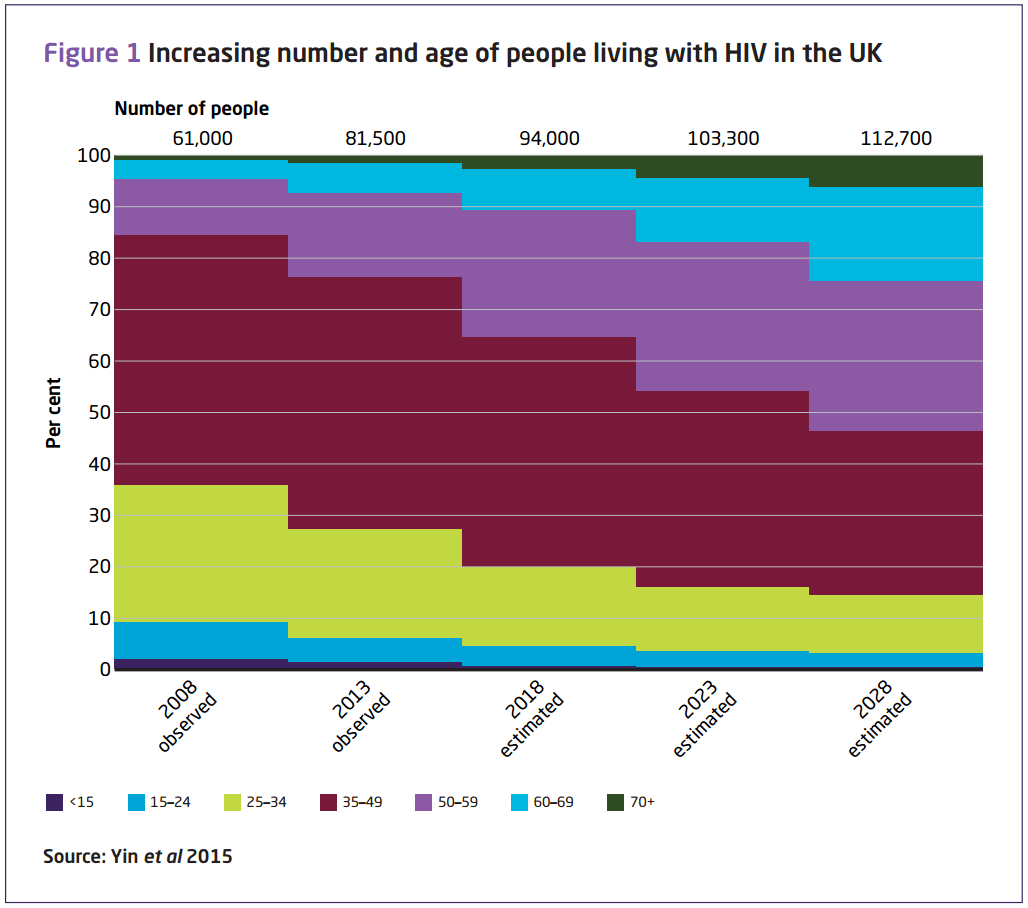 Reforms introduced in 2012 divided up and distributed responsibilities for commissioning HIV services (see Figure 2), which has created difficulties for co?ordinating and planning the future development of services. The rest of the health and care system is now integrating across local areas, through NHS England’s vanguard sites for new care models, STPs and the work of health and wellbeing boards. These developments offer opportunities for co-ordination of care between services and commissioners across the HIV pathway. 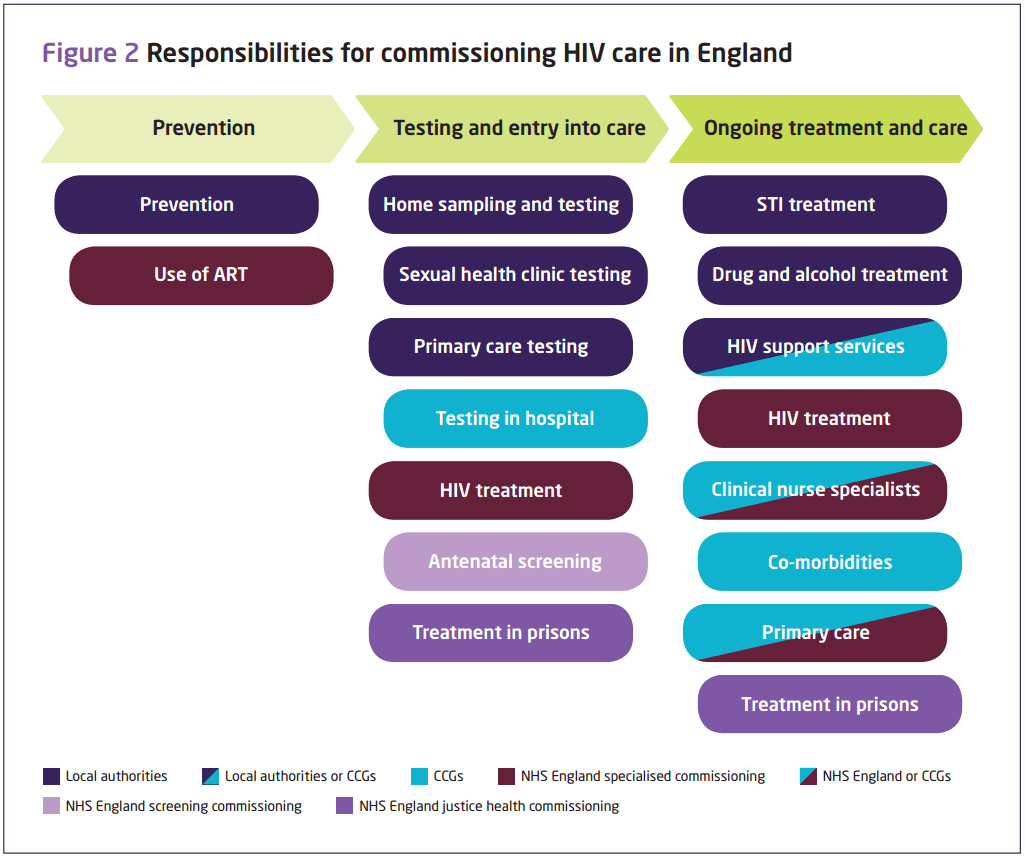 The purpose of our research was to make recommendations to those in national and local leadership roles on how HIV services should develop over the next 5–10 years.

We investigated the current situation for HIV services and the challenges and opportunities that they face. We studied four areas in England as examples of urban and rural, low and high prevalence areas, undertaking focus groups with people living with HIV and interviewing around 100 people in local and national HIV services.

People living with HIV told us that the quality of care they received from specialist clinics continued to be excellent. They emphasised the importance of broader social, psychological and emotional factors – as well as the clinical treatment – in enabling a good quality of life with HIV, and the value of HIV support services. However, feedback on the services provided by non-HIV specialists was mixed and for GPs’ roles in HIV care it was predominantly negative. There were frequent examples of being ‘passed from pillar to post’ when needing treatment for co-morbidities.

Stigma remains a significant factor in people’s experience of living with HIV, particularly in non-HIV-specialist settings. Stigma can affect how people access HIV tests and seek and respond to care, which in turn can mean that HIV remains untreated.

National data shows that the incidence of HIV has increased among gay and bisexual men, which underlines the importance of preventive services. We found a consistent focus on increasing testing, which is encouraging as there is significant variation in different areas for timely diagnosis. But testing was often not accompanied by wider approaches that address the social and cultural drivers of sexual health behaviours. There were promising signs that early diagnosis and initiation of treatment, and increased use of pre-exposure prophylaxis (PrEP), might be helping to reduce positive diagnoses in London.

All areas that we visited were thinking about future models of HIV care but this thinking was at an early stage. Some places had developed aspects of ‘shared care’ (specialists and GPs working more closely together) and these pioneers might have lessons that could be applied more widely in HIV care. However, these examples were often reliant on committed individuals and no national organisation was driving this across the HIV care system. Despite the increase in the number of older people living with HIV, none of the study areas was planning for how HIV care would be co-ordinated with social care, for example, in care homes.

All areas described key values – such as wanting to keep people healthy rather than only reacting to ill-health, and to empower people to make decisions about their own care – which are closely mirrored in well-established policies and frameworks for care of long-term conditions. However, at neither a local nor national level are HIV services linked to policies, frameworks or good practice guidance for long?term conditions. Our view is that using the same frameworks and approaches as other long-term conditions – with adaptation as needed – could help the co?ordination of care where people have co-morbidities.

One area had a structure that brought all the stakeholders (including people living with HIV) together with a single overarching plan for prevention, treatment and care and clear leadership for this plan. The area was consulting on a strategy for reducing new cases of HIV, HIV-related deaths and stigma. In the other areas, there was confusion over who – if anyone – had the authority to ensure co-ordination across services and to lead the development of new care models. In London, this situation is exceptionally complicated with responsibilities divided across 33 local authorities and 32 CCGs as well as unclear roles for other bodies, such as the Greater London Assembly.

Local authority commissioners have introduced innovations and improvements, especially in increasing HIV testing. But there were also examples of insufficient attention being paid to the need to co-ordinate between re-tendering of sexual health services and NHS England’s commissioning of HIV treatment services. We found cases of people needing to access HIV and other sexual health care in different locations, and services where previously integrated workforce and clinics had been split and risked becoming unviable.

We were also told that co-ordination of planning with mental health and with drug and alcohol services had reduced. Our focus groups and voluntary sector interviewees were particularly worried about reductions in social support, which they saw as essential to helping people cope with the mental and emotional impact of HIV.

None of the HIV services we visited were well joined up with broader strategies for health and care in health and wellbeing strategies and STPs. All the areas wanted national leaders to ‘do more’ to help HIV services develop for the future, but there was no consensus on what that should look like – except that it should not be top?down direction or another structural reorganisation.

All the areas we visited continued to provide high-quality clinical care for people living with HIV and were thinking about long-term models of care, but most did not have system-wide plans in place or arrangements for developing them.

The demographic shift in people living with HIV is already visible with growing numbers of older people, as well as new cases among younger people. Closer partnerships are needed between specialised services and other health services, including GPs, and with social care services. There also needs to be better co?ordination of commissioning decisions. We recommend that NHS England should support the development and adoption of new models of HIV care.

Some approaches to prevention were encouraging (especially increases in testing and, based on very early indications, PrEP) but they lacked focus on influencing knowledge and behaviour. People’s continuing experience of stigma is concerning.

The fragmentation of responsibilities for HIV services has made it difficult to provide co-ordinated care, to plan across the whole service, and to adapt the local care system in response to changes in people’s needs.

In one of our case study areas, however, the system was working well. The key factors enabling this were having the right system leadership, governance and co?production.

In most areas, stronger and much clearer system leadership is needed to bring together the various stakeholders – including providers, commissioners and people living with HIV – around a shared, overarching plan. System leaders need to have authority to implement the plan across NHS and local authority areas of responsibility. They will need to nurture effective relationships, and develop joint governance. We recommend that directors of public health and lead HIV consultants in each area should have responsibility for this and for identifying which individuals take on the key roles.

Models for co-ordinating long-term care already exist and some other services, such as those for cancer, have similarly evolved from providing specialised treatment to including long-term care. Local HIV services need to work out how to learn from these and adapt them as appropriate to join up care. STPs and health and wellbeing strategies offer overall frameworks for integrating services. National policies, guidance and frameworks for long-term care should also include HIV.

HIV services must be designed locally to reflect the diversity of needs. But national NHS bodies should set the overall strategic direction and expectations, and ensure accountability. We recommend these should be more tightly defined. We also recommend that stronger national leadership is needed to take action to reduce stigma, both in general and in non-HIV-specialist health care, and to support and co?ordinate the roll-out of future models of HIV care and develop the HIV workforce.

Our work was supported and tested by an Advisory Group and was funded through an unconditional grant from the M·A·C AIDS Fund. It was carried out independently by The King’s Fund, and the views in the summary and full report are those of the authors. 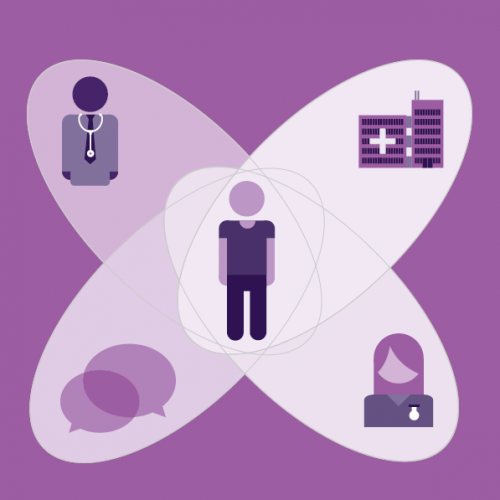 The future of HIV services in England: social media

A range of social media resources including a video, GIFs and graphics on the future of HIV services in England.
Press release

Complexity of health system is 'holding back progress' in HIV care

The complexity of the health system is holding back progress in meeting the needs of people with HIV, according to a new report from The King's Fund.
Paid event

The future of HIV services in England

This project, funded by the MAC AIDS Fund, will look across the HIV pathway from prevention to treatment and ongoing support, and consider how system-level policy developments apply to HIV services.

Deborah Gold, Chief Executive of the National AIDS Trust, discusses progress made by HIV services and how to ensure this progress continues by building partnerships between services.

Professor Chloe Orkin, Chair of the British HIV Association (BHIVA) and Consultant Physician at the Royal London Hospital, outlines the challenges of delivering HIV services and discusses BHIVA&#39;s work in reviewing the standards of HIV care and advocating for better HIV services.

The Rt Hon the Lord Fowler, Lord Speaker, House of Lords, discusses how the United Kingdom has achieved its successes in HIV policy, and sets out priorities for future policy.

Professor Jane Anderson, Visiting Fellow at The King&#39;s Fund, shares findings from our report on The future of HIV services in England.