When I am rude, discourteous or impolite, I cannot be surprised if others will see me as having little regard for them. If I use my power to coerce others into doing what I want, I should not be surprised if people think me oppressive or a bully. If I behave like this, I am doing harm. I am harming the conversational culture that is fundamental to keeping people safe.

How we talk to each other is important. If people do not feel free to speak to what they think and what they notice at the time, we risk making poor decisions based on partial data. As Robert Francis noted, the word ‘hindsight’ occurred 123 times in the transcript of the oral hearings, the ‘benefit of hindsight’, 378 times. People noticed much more than they felt able to talk about.

Our workshop on bullying and incivility at the Ninth annual leadership and management summit on the 10 July 2019 is an invitation to explore how you reduce the time between noticing something and speaking about it. Where hindsight becomes foresight.

Over the past couple of years, we have spent a lot of time talking to people who feel silenced. Good and skilful people. People who find their willingness and ability to do their job compromised, sometimes for a few hours and sometimes for a lot longer. People who are part of a conversational culture that does not value argument, disagreement or questioning. They find themselves in and replicating a culture that values conformity – not going against the grain, or raising awkward facts or observations.

It is as if we have forgotten the pleasure of a good argument, rooted in an ethic of inquiry.

There is nothing wrong with agreement: sometimes it’s clear what needs to be done and although it may be complicated, there is not much ambiguity about what is going on and what needs to be done. However, when we get into conversation with people who have been coerced into silence, they often describe situations characterised by ambiguity. While they feel a personal pressure to be quiet, a wider purpose may be being served: to keep complex situations simple.

The drive for agreement in complex situations, expressed through incivility and coercive behaviours, silences people and silences debate. For example, at a recent seminar, a senior nurse talked about a bed state meeting. He felt obliged to speak about the risks associated with moving patients to a ward unfamiliar with their specific condition. This intervention triggered a hostile response, leaving him in no doubt that he should shut up. It was as if, in speaking, he was refusing to acknowledge the pressure to avoid meeting the four-hour target. This was not the case. He wanted to raise the other side of the dilemma confronting the people in the meeting. While they had to move patients out of accident and emergency within four hours, they also had to try to keep individual patients safer, by getting them to specialist care as soon as possible. The coercive behaviours silenced him and the issue of safety for particular patients.

Coercive behaviours silence clever, experienced, people – people valued for their thinking and expert know-how. The research is unequivocal. If you are the target, or a witness of these behaviours, your ability and willingness to do your job and to collaborate is significantly undermined. We rightly pay attention to the efficiency and cost of our services, but we do not seem to be as curious about the loss of value when people are silenced, distracted, or withholding effort.

It is as if we have forgotten the pleasure of a good argument, rooted in an ethic of inquiry. Where the purpose is to understand other points of view, and where you have the time and opportunity to explain yourself and possibly change opinions. Where good conversational skills include the willingness to say ‘stop’ and ask ‘why do you think that?’ The willingness and skills to be stubborn and flexible, awkward and constructive, tenacious and kind.

We can forget how hard won this sort of conversation can be and how hard we have to work to allow ourselves and others to speak freely as part of the daily conversational practice in a team or service. As Zeldin notes in An intimate history of humanity, free speech was an ‘empty right until people freed themselves of the feeling that they did not know how to express themselves properly’ and that we needed to overcome ‘the old ingrained dislike of being interrupted, which seemed like a mutilation’.

Sometimes, listening to people describe a meeting in which they have been shouted at, or sworn at, I think we have returned to an earlier time where being questioned and not being agreed with immediately is experienced as an attack and losing face. However, what is changing is that some people are prepared to resist being silenced and find a way of kindly and firmly asking people to say more about what they are thinking and noticing. To welcome conversation as inquiry as a practical way of keeping people safer, regardless of their role. The conversation we hope to have on 9 July is an opportunity to understand more about how people do this. 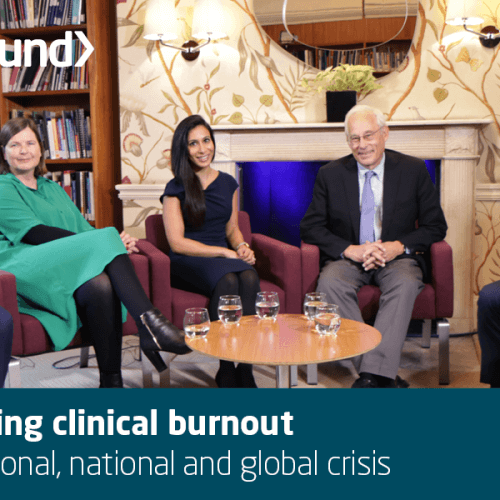 Our online event explored some of the latest evidence on the health and wellbeing of clinicians and the practical actions that can help to make a difference to the lives of staff. Our speakers discussed the pressures that threaten personal health, morale, patient care and create a burden on the NHS, while exploring how to tackle the root causes and engage people and leaders in how to create the best, supportive places to work. 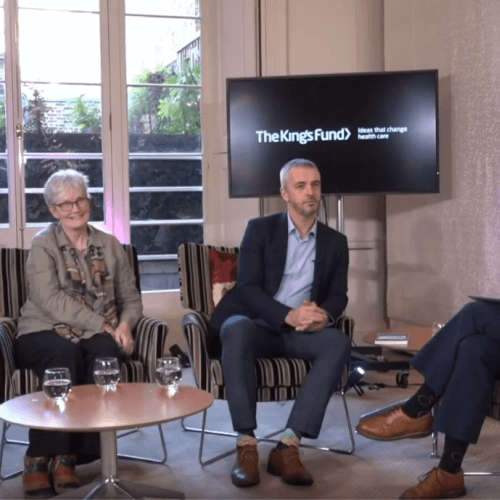 This online event explored how different components of personalised care are being implemented in practice.
Press release

‘It is a sad irony that working for the health service can be bad for the health of its own employees. This welcome new report focuses on doctors, but so many of the conclusions could apply to any staff group working in the NHS' says Suzie Bailey, Director of Leadership and Organisational Development at The King’s Fund.