As a provider chief executive one of the mainstays of my work was achieving the balance between quality, access and money. That means you can’t focus on one and exclude the other two, real success is achieving all three. It is a version of the triple aim.

Focusing on one of those priorities can seem more straightforward. Making every decision based on what the spreadsheet says or alternatively with an absolute focus on quality with complete disregard for the cost means you don’t have to manage the complexity and consequences. However, that is not the reality of life for NHS leaders and is not the right way forward. As we saw in Mid-Staffs and more recently at Liverpool Community Trust, focusing too much on money can have negative consequences for staff and patients in terms of safety, outcomes and culture.

Get the balance right and you can deliver great outcomes for patients and progress your organisation's objectives. One positive example is reducing length of stay, which mitigates risks for patients staying in hospital too long but also reduces costs and frees up capacity to improve access for other patients. Finding that sort of sweet-spot is an opportunity for the NHS.

The reality is that it is getting harder and harder to achieve. Our quarterly monitoring report published today shows that around half of the trusts we surveyed are forecasting a deficit, a third are concerned about meeting their control total, just under half are concerned about meeting their cost improvement plans and many are relying on the Sustainability and Transformation Fund, loans and reserves to keep afloat.

This is more widespread and more significant than I have experienced in 25 years in the NHS; 21 provider trusts will have missed the Q3 forecast by more than £20 million and / or are predicting they will miss by the same amount by the year end. This number is increasing almost daily, as evidenced by the recent news from University Hospitals of North Staffordshire. An improvement before the end of the financial year appears unlikely, and the recent cold weather with more elective cancellations could well exacerbate this.

It is wrong to suggest this is because of a lack of effort – there has been real progress with cost improvement plans – but there may well have been a subtle shift in priorities. I have been hearing recently of organisations seeing success as being halfway down in a list of trusts missing their deficit. If this is the reality, it presents a real risk – once lost, financial stewardship is difficult to regain. Going the other way, there has also been a recent spate of trusts creating offshoot organisations for some staff groups to help deliver savings – a sure sign that organisations now feel they have to look at increasingly difficult, and some would say, inappropriate initiatives to make the books balance.

One of the reasons for these responses is the requirement to sign up to the pre-determined control total, a process which a number of organisations feel is impossible. If they sign up to a control total they don’t believe they can deliver, they suffer the consequences of lost sustainability funding as well as more scrutiny and support when the inevitable happens. If they decide to refuse the control total up front, they forego their ability to earn sustainability funding and are subject to the fines and penalties still being lodged on providers through the contract. Many feel that they are between a rock and a hard place and so either take more drastic actions or – increasingly – set aside one or more of the objectives.

The national position on referral-to-treatment waiting time targets is an example of the latter. We run the risk that once it is lost, it is both operationally challenging and very expensive to recover. More importantly, of course, is the impact on patients’ lives of waiting, often in pain; this is a further demonstration that the quality, access and money balance is increasingly difficult to achieve.

There is real understanding that addressing these issues takes system-wide working and increasing integration, and the introduction of the commissioner sustainability fund to join the provider version is an example of this. However, at the same time, despite the national drive to bring the regulators closer together, the reality on the front line is continued pressures on providers and commissioners with contract queries, fines and penalties being traded as a consequence of the purchaser–provider split backed up by separate regulators.

Without an honest debate about control totals and clear management of the quality, access and money dynamic there is a risk that the integrity and will of providers and commissioners will be lost. This has implications for the front line and for patients but also for the reputation of the service; politicians are increasingly asking questions such as: Why does the NHS sign up to targets and then not deliver what they say? Is it the front line that is failing or the regulators who are not able to deliver on their responsibilities? Either way the process feels as if it is in disrepute; targets around money and / or access times are so difficult to achieve that some may not even try, focusing on a smaller and smaller number of priorities and just maintaining safety.

This cannot be the aspiration for the NHS in 2018. While the amount of money, even with the additions in the last budget, is widely acknowledged to be inadequate, the implications of that on quality and access similarly should be acknowledged; it should not just be left to the front line to take the pain, sanction and risk. 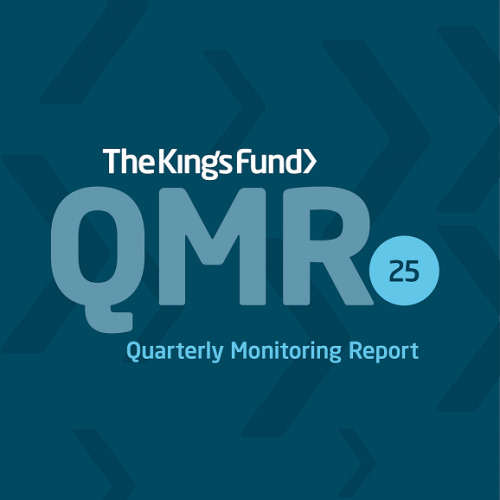 How is the NHS performing? March 2018 quarterly monitoring report

We find that more patients are facing long waits for hospital treatment, with many of those experiencing the longest waits often most in need. And with demand for services continuing to rise it's very unlikely that meeting waiting time targets will become more achievable.

Our quarterly monitoring reports provide a regular update on how the NHS in England is performing. We examine the views of finance directors on the productivity challenge they face, as well as key NHS performance data.
Press release

The King’s Fund is calling on the NHS to ensure that the way waiting time targets are implemented prevents increasing numbers of patients from facing long waits for hospital treatment.

Hi Matthew,
This is great, and I totally agree. I always sell the importance of the “three circles” and that a trust (or any organisation) will suffer in two of the areas if they put too much (or the sole focus) on one.
Many leaders, and sadly in some very senior positions, do not get this, and merely concern themselves with their own area of expertise, thinking and even saying “I don’t do money”, or “I can’t think about quality, I just need more staff to clear my backlog”.
The PMO is still going strong at EKHUFT working to the principle that if there is an idea to improve efficiency, productivity, or patient experience, we can help the project leads think about how the change will affect all three circles. Obviously we’re looking for the ultimate goal of improving all three, an even just having some regard for all three will at least ensure that one (or more ) does not suffer at the expense of focusing on the other.
Happy to talk to discuss
Kind regards
Bernard

Hi Matthew, Additional factors are Leaders with vision, Joined up working between Primary and Secondary Care, Rapid and accurate diagnosis at first presentation by senior clinicians, minimising investigations and honest cooperation between Clinicians and Managers. Thank you.