Survey data shows that the NHS is the institution that makes us most proud to be British and that public satisfaction with the NHS remains at historically high levels. Surveys also reveal increasing pessimism about the future, with the public identifying insufficient funding and the shortage of health care professionals as the main causes of the pressures facing the NHS. During the recent general election campaign, the future of the NHS – alongside Brexit – was identified as the most important issue facing the country.

Our view at The King’s Fund is that the NHS needs both investment and reform to meet rising demand and growing public expectations. After seven years of austerity and historically low growth in funding, patients are experiencing longer waiting times for treatment and restrictions on some services. Pressures on the NHS are compounded by cuts in public funding for social care that have resulted in around 400,000 fewer older people receiving care at a time of increasing need. Cuts in public health budgets are storing up problems for the future.

While there is undoubtedly scope to improve efficiency in the NHS, as shown in the Getting It Right First Time programme, it will take time to release resources for reinvestment. The immediate priority must therefore be to provide additional funding for social care and the NHS to enable investment in new buildings and equipment, and to pump prime the development of new care models. A start has been made with the allocation of extra capital funds to support sustainability and transformation partnerships but much more is needed.

The vanguards, set up following the Five year forward view, are demonstrating the way forward for reforming services, and in some areas are seeking to provide more care in the community and in people’s homes. Almost everywhere work is under way to integrate health and social care to better meet the needs of older people and others with complex needs. A dedicated transformation fund would help accelerate progress, not least by helping to cover the double-running costs of establishing new care models while sustaining existing services.

More fundamentally, there is a need to rethink the organisation and funding of the NHS and social care. Increases in life expectancy and changes in the disease burden that have occurred since the post-war settlement limit what can be achieved within current arrangements. Three years ago the Barker Commission made a compelling case for a new health and social care settlement in its final report and its arguments have been echoed in the recent House of Lords report on the sustainability of health and social care.

The Barker Commission argued for a single health and social care budget controlled by a single commissioner. It proposed that that there should be more generous entitlements to social care, implemented progressively over a decade, with priority being given to people with critical and substantial needs. It called for an end to the current lottery in which public funding for care depends on diagnosis rather than need. In the Commission’s view, there should be equal support for equal need and this would require public funding on the NHS and social care to rise to between 11 and 12 per cent of GDP by 2025.

As the OECD has shown (see graph), spending on social care in England has fallen substantially in recent years while it has increased in most European countries. 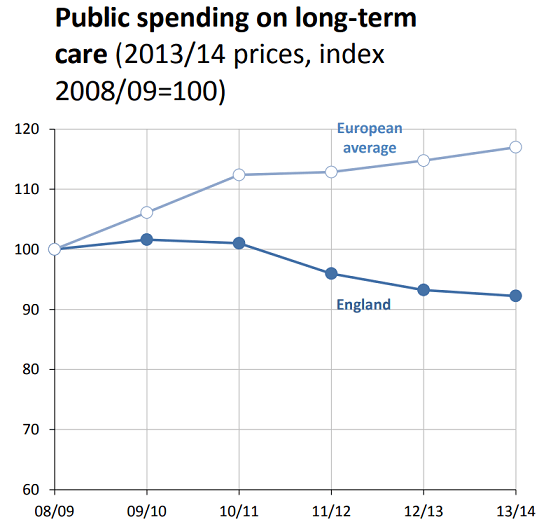 The Conservatives’ election manifesto made a commitment to address social care funding and the eagerly awaited Green Paper, expected later this year, will reveal the government’s thinking. This Green Paper will provide an opportunity to tackle issues that successive governments have put in the ‘too difficult’ box and to fulfil the manifesto commitment to act ‘where others have failed to lead’.

This means confronting the hard choices outlined by the Barker Commission on how to pay for a sustainable health and social care system fit for the future. A combination of public and private funding will be needed and increases in tax and National Insurance will be necessary. Options considered by the Commission included increasing National Insurance contributions for high earners and people aged over 40; ending the exemption on National Insurance contributions for people working past state pension age; and exploring ways of redirecting public spending on winter fuel payments – and perhaps Attendance Allowance – into a single health and social care budget.

Survey data suggests an increase in the proportion of people willing to pay more in taxes to fund the NHS, as well as support for hypothecated taxes which provide a clear link between what people pay for and what they receive. None of these choices is easy, and there are other options that should be considered, but they cannot be avoided if politicians want to maintain high levels of support for the NHS and high levels of public satisfaction. The best way forward would be a cross-party approach. Is this too much to hope for in a system wedded to adversarial politics rather than consensus building? 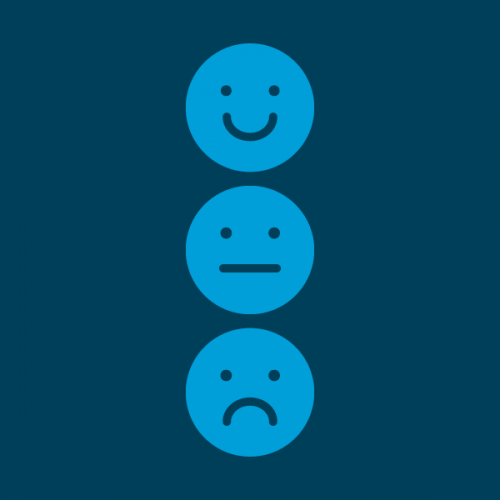 The annual British Social Attitudes (BSA) survey asks members of the public about their views on, and feelings towards, the NHS and health and care issues generally.
Article

The outcome of the general election will mean more of the same for the NHS and social care in the short term, and huge uncertainty on two fronts in the medium term, says Chris Ham.

The public are aware that the NHS is very short of money. May I presume to make a suggestion?
The supermarkets, fast food outlets and others make their billions in profits on us , the public. Heavens only knows what they annually spend on advertising, the cost of which we, the consumer, collectively have to pay everytime we make purchses or avail ourselves of services. What do we the public [consumer] get in return? Gimmicks and gingles. Can some way be found to apply moral suasion on these business giants so that they see their way to giving back something of substance to the public? For example, they could provide specialist hospitals with the most up-to-date equipment. This would go some way to easing financial pressures on the NHS. Discreet acknowledgements placed in suitable locations in those hospitals could inform the public of their "good deeds". Effectively, supermarlets [and others] would be using their "good deeds" as advertising vehices and at the same time they would be easing the financial burden on the NHS. I feel sure that others can come up with better, more imaginative ideas in order to achieve the same objective.
There are big challenges ahead. Local innovation is not being encouraged however. I am given responsibility for a prescribing budget of £1M, but not trusted with £100 of adult social care funds for emergency use.
If the synthesis of ebay & paypal is used as an example, it might be time to use similar technology to assist the application for social care from the health sector to facilitate prompt action for the individual and help ease the pressure on the local A/E department.
The increasing problems are evident to all. There is no doubt that the NHS is currently underfunded. For a start outsourcing of work to the private sector should stop and the money saved invested in building more facilities and short term contracting out discontinued and PFI ruled out altogether.

How should we pay for health care in future? Results of deliberative events with the public

In collaboration with Ipsos MORI, we held two deliberative events with members of the general public (one in London and one in Leeds) to find out what they thought about future spending on health and social care, and how that spending might be funded.
Blog

Managing ACSCs: how can avoidable hospital admissions be reduced?

One of the benefits of the UK’s primary care based system is that it keeps patients away from unnecessary admission to hospital – however it may not be succeeding.
Blog

'‘The significant additional investment already announced for the NHS to stabilise services, upgrade equipment and facilities and tackle the backlog of care is very welcome, but the real game changer would have been clear funding for a workforce plan,' says Richard Murray, Chief Executive of The King’s Fund.