In 2005, I was a senior specialist registrar in surgery at the Royal London Hospital and managed casualties from the 7/7 London bombings. Twelve years later, now a consultant trauma surgeon at the Royal London Major Trauma Centre and Director of the London Major Trauma System, I was surgical commander for the hospital’s response to the London Bridge attacks.  A lot has changed in those intervening years.

Mass casualty events such as the recent London terrorist attacks can rapidly overwhelm the capacity of a receiving hospital.  A central tenet of casualty care in these events is that to be able to care for many patients, a system must already be able to provide optimal care for one patient.  Prior to 2010, trauma care in London was not organised, and the response to the 7 July 2005 terrorist bombings occurred in the absence of a London-wide system.  Triage decisions by personnel at the scene relied almost entirely on their own personal knowledge of the capabilities and potential capacities of nearby hospitals.  Only one receiving hospital had all the specialisms required of a modern major trauma centre and it received 194 casualties, of all severities, in the space of a few hours.

In 2010 a regional trauma system was instituted across London, designating four networks responsible for trauma care across their geographical population, each led by a hospital that was brought up to full major trauma centre standard; 30 further hospitals were designated as receiving trauma units.  This ‘inclusive trauma system’ approach was based on a public health model of trauma as a disease and was a refinement of systems already in place in other parts of the developed world.  The London Trauma System now manages more than 12,000 trauma patients each year within a robust quality improvement framework.  Since 2010 the London Trauma System has improved access to specialist trauma care, improved quality of care, and more than halved the mortality of severely injured patients.

The context for the 2017 terror attacks across London was therefore very different from 2005.  In the largest attack at London Bridge, 36 patients were treated across three major trauma centres and two trauma units.  System knowledge allowed pre-hospital teams to appropriately triage patients across the system, and only two patients subsequently required secondary transfer to a major trauma centre for ongoing care. In both major trauma centres and trauma units, clinical teams had the expertise and resources to manage critical injuries.  Across all three terror attacks – Westminster, London Bridge and Finsbury Park – only two of nearly 100 casualties died in hospital.  For the London attacks, the London Trauma System has effectively turned a mass casualty event into several smaller incidents that fell well within the capacity and capability of the receiving hospitals.

In 2012 the London Trauma System model was rolled out across the rest of England, with the country now covered by 17 major trauma networks with 27 major trauma centres.  The national trauma system is still maturing but has already demonstrated improved access and outcomes and is viewed with envy by other international health systems.  In the Manchester terrorist bombing, 59 casualties were managed between four major trauma centres and four trauma units; only one died in hospital.  Our specialist trauma networks save lives in terrorist events because they save lives every day.  A system that must care for many, must first be able to assure care for one.

Professor Karim Brohi is a consultant trauma and vascular surgeon at the Royal London Hospital, Professor of Trauma Sciences at Queen Mary University of London and Clinical Director of the London Major Trauma System.

Organising care at the NHS front line: who is responsible?

What are the challenges facing frontline clinicians today and what could they do to improve the quality of care? Our report presents a range of views from clinicians, managers, quality improvement champions and patients. 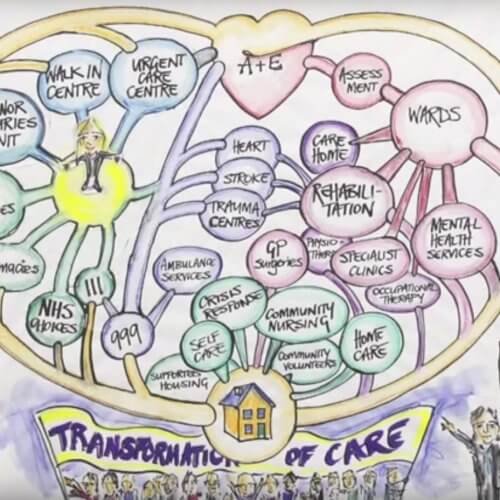 London acute hospitals and their configuration

Service reconfigurations have now been proposed for each of the London sectors. This information relates to developments since December 2011 and first appears in the appendix of our report, Leading health care in London: Time for a radical response.