In 2018/19, total expenditure on social care by councils was £22.2 billion, a real-terms increase of £426 million (2 per cent). This continues the trend of more spending on social care, which started in 2015/16, after council expenditure hit rock bottom in 2014/15. However, the current level of expenditure is still below the 2010/11 level, and it does not reflect the increases in population and levels of demand explored in indicator 1.

Nor have cuts in social care been evenly distributed: between 2010/11 and 2017/18, the 30 councils with the highest levels of deprivation cut services by 17 per cent per person, compared to cuts of 3 per cent per person in the 30 least-deprived areas.

How is social care spending decided?

Spending on adult social care is decided, individually, by 152 local authorities. There is no national social care budget, though the amount available to spend locally is affected by national government decisions on the formula underpinning local government finance.

'Total expenditure' on social care includes local authority spending that derives from three main sources: money that councils allocate to social care from their central budget (including money they raise from the additional ‘social care precept’ on council tax); income from social care service users (through fees and charges); and income from the NHS.

However, to understand what types of services the money is being spent on, we have to use a different measure – gross current expenditure – which excludes income from the NHS. This reduces total council expenditure on social care to £18.7 billion.

Of that £18.7 billion, most (£14.6 billion) is spent on long-term care, split almost equally between working-age adults and older people. Short-term care accounts for £580 million, with the remainder spent on a broad range of services, including support for carers, information and prevention, assistive technology, support for social isolation, and the costs of commissioning and service delivery.

It is important to note that this is purely council spending on social care. None of the expenditure data includes private spending on care, for which – as the Office for Statistics Regulation noted in its 2020 report – there are no reliable estimates of trends (though the National Audit Office estimated the total size of the self-funder market at £10.9 billion in 2016/17). There is also significant expenditure on disability through the benefits system, which was covered in indicator 5.

7. The cost to councils of buying care continues to increase 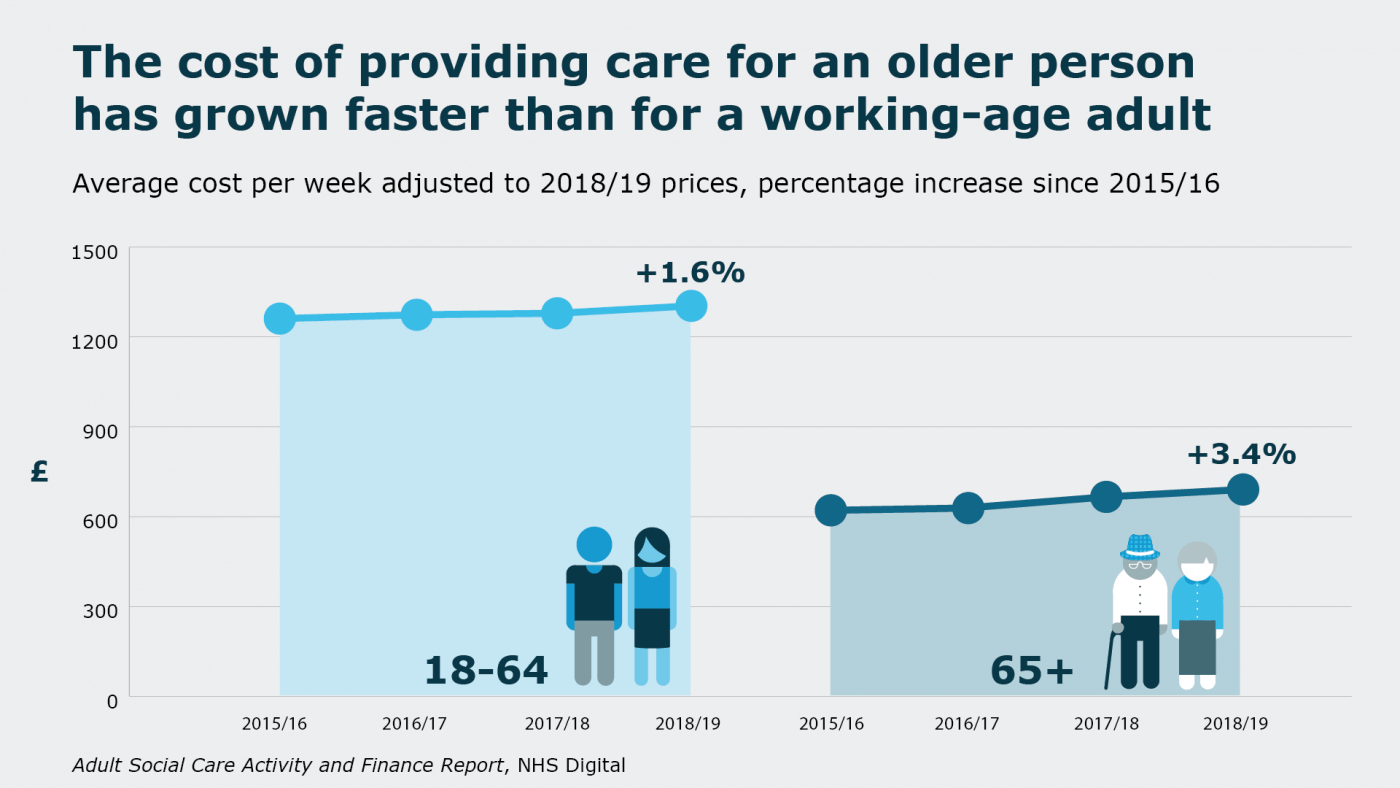 Since 2015/16, there has been a consistent, above-inflation increase in the cost to local authorities of purchasing residential, nursing and home care. Partly as a result, all the extra money – and more – that local authorities have spent on adult social care since 2015/16 has been absorbed by external suppliers. Overall expenditure in 2018/19 was £941 million more in real terms than in 2015/16 (see indicator 6) but spending on commissioned services rose by £1.4 billion. Spending on councils’ own provision and grants to voluntary organisations has fallen.

The biggest increase – by 10.4 per cent in real terms – has been in the costs of residential and nursing care for older people. Last year alone, the increase was 4.6 per cent. Costs of the same care for working-age adults have increased by 3 per cent since 2015/16, and 1.6 per cent last year. However, these costs were much higher to begin with.

The cost of home care (which we are not able to split between older people and working-age adults) has increased by 9.6 per cent since 2015/16 and by 2.9 per cent last year alone. It was below the £18.01 (at January 2019) recommended minimum rate proposed by the United Kingdom Homecare Association (UKHCA). As with other indicators, there is also very wide local variation in costs.

At least some of this expenditure on fees is being used to cover increasing workforce costs of adult social care providers. Between 2017/18 and 2018/19, the social care sector wage bill increased by 4 per cent (though the number of full-time equivalent (FTE) jobs increased by only 0.5 per cent), driven by an increase in the statutory minimum wage of 4.4 per cent in cash terms. For 2020/21, the increase in the main rate of the living wage is 6.2 per cent. Another factor is the unit price of packages for people with increasing complexity of needs.

Higher fees may also have helped restore margins in the sector, potentially stabilising a market that has seen significant numbers of providers either go out of business or withdraw from the publicly funded sector altogether. If so, it has not been entirely successful since another large provider, the Mears Group, has recently opted to sell its home care business, citing the lack of a sustainable public funding model for the sector.

Numbers of beds for older people are declining in residential and nursing homes.
Topic

Just concerned about the elderly patients in care home and residential homes amid the COVID 19 .

Has the public health England issued or sent any specific guidlines for these elderly patients who are the highest group .
At the moment they must be presenting to hospitals with non specific symptoms and majority of them cant give history so clinician relying on them has to use the second hand Information from carers.

I feel we need clear guidance on this vulnerable group .

Concerned about lack of PPE, support and guidance for PA’s in the community as they work solely on there own and given this difficult time some may require more specific guidance through the pandemic