In 2013 the Care Quality Commission (CQC) introduced a new approach to inspecting and rating NHS acute hospitals. The change was triggered by several high-profile failures of care that raised questions about regulators’ ability to identify and act on poor performance. The new approach included in-depth inspections by larger, more expert teams and produced ratings and an inspection report for each provider.

This new approach was extended to other parts of the health and care system in 2015 and continues to evolve. CQC’s revised strategy for 2016–21 set outs their plans to further develop their regulatory model.

Alliance Manchester Business School and The King’s Fund undertook a mixed-method research study funded by the Department of Health’s Policy Research Programme. We explored the impact of CQC’s approach to inspection and rating on providers in four sectors (acute care, mental health care, general practice and adult social care). To do this we combined a literature review and qualitative fieldwork nationally and in six parts of England with quantitative analyses of national data on provider performance, ratings and activity. The qualitative fieldwork included 170 interviews with a range of staff from health and social care provider organisations, CQC, patient and public groups and other stakeholder organisations such as Healthwatch, NHS England and clinical commissioning groups (CCGs).

A framework for understanding the impact of regulation

Eight ways that regulation has an impact 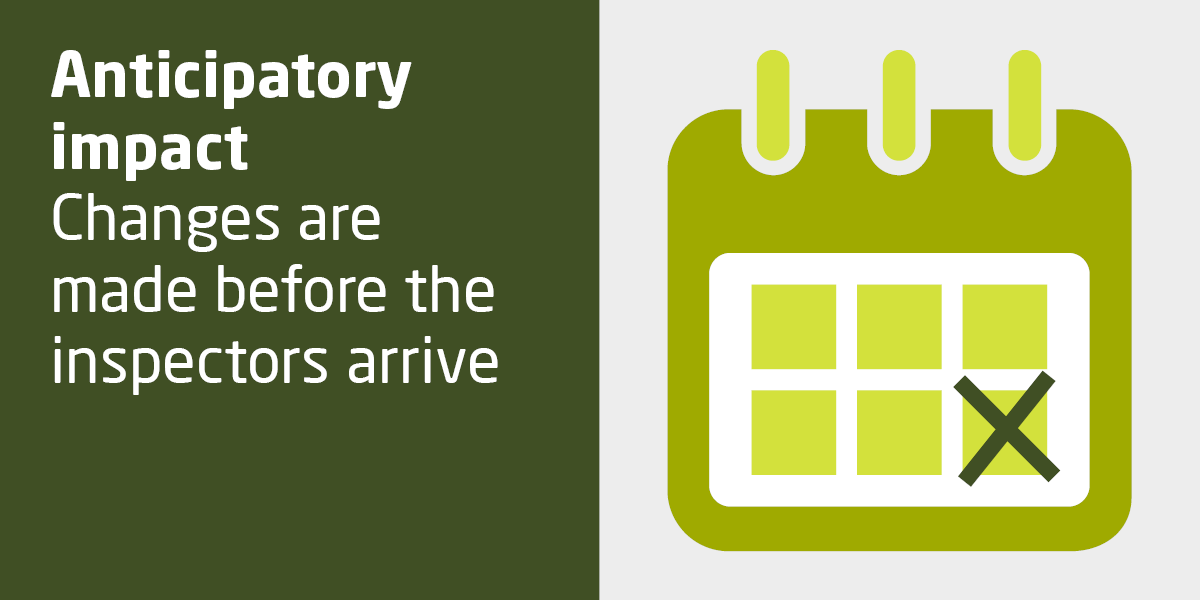 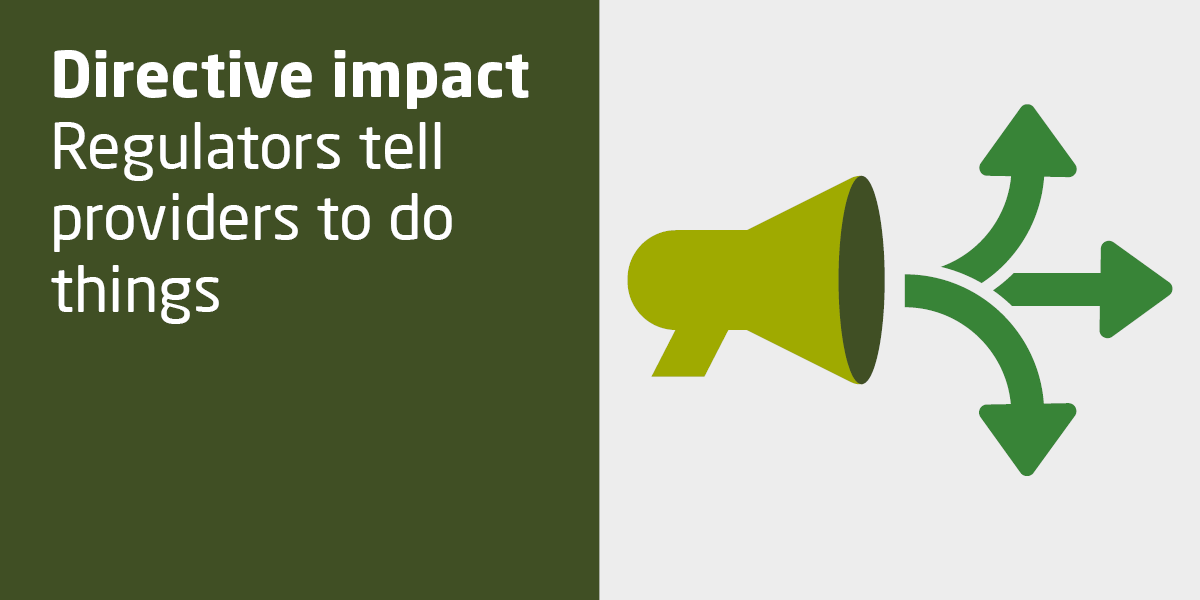 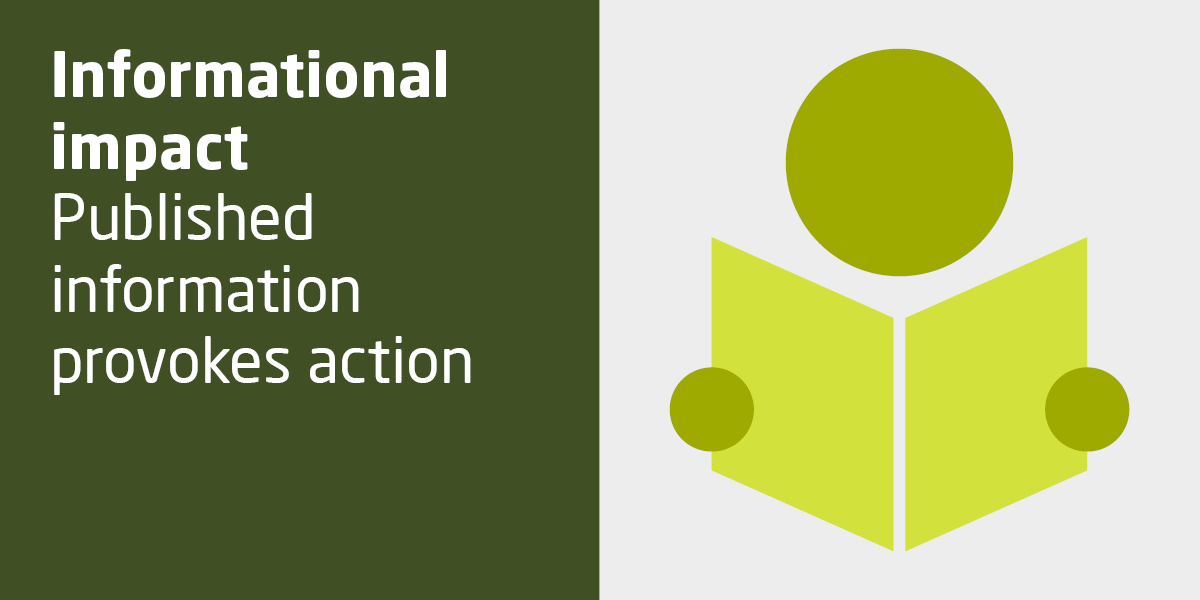 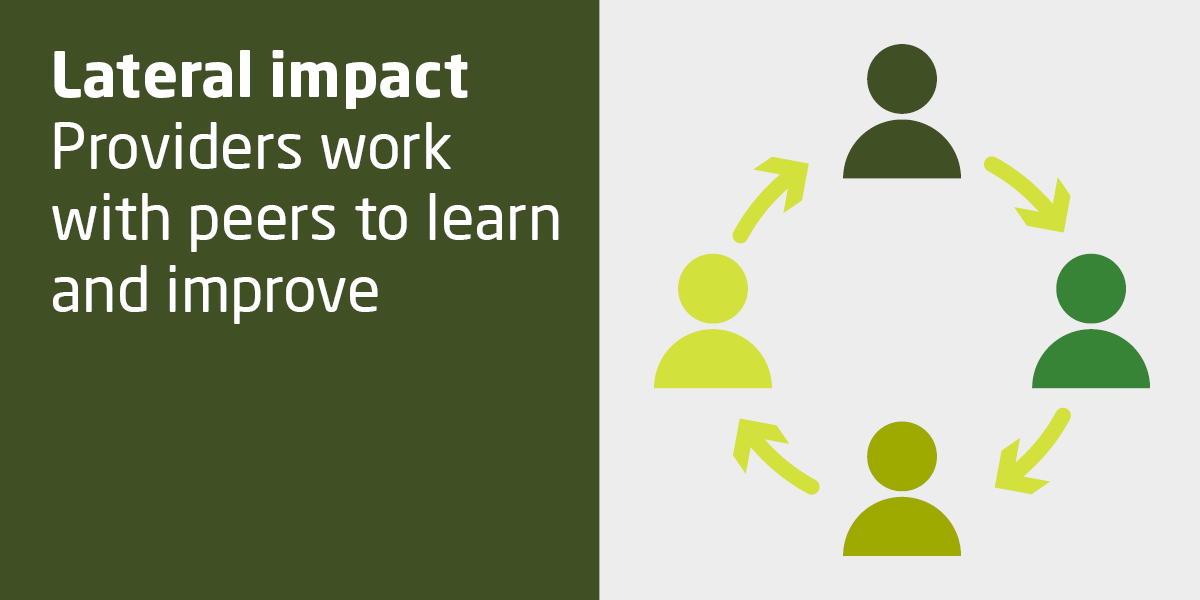 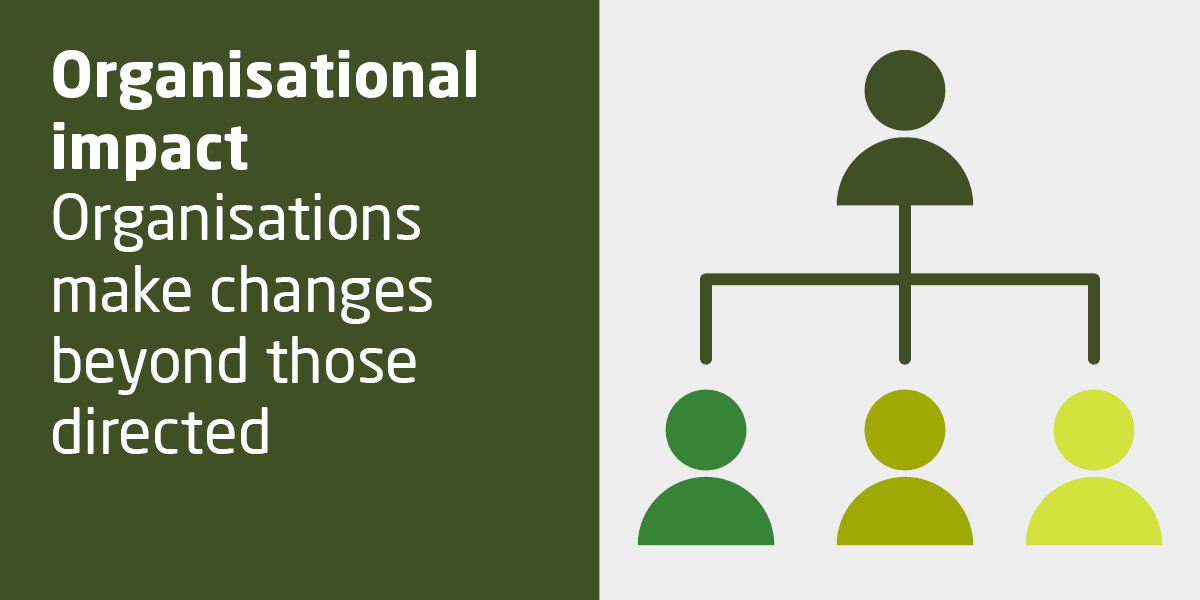 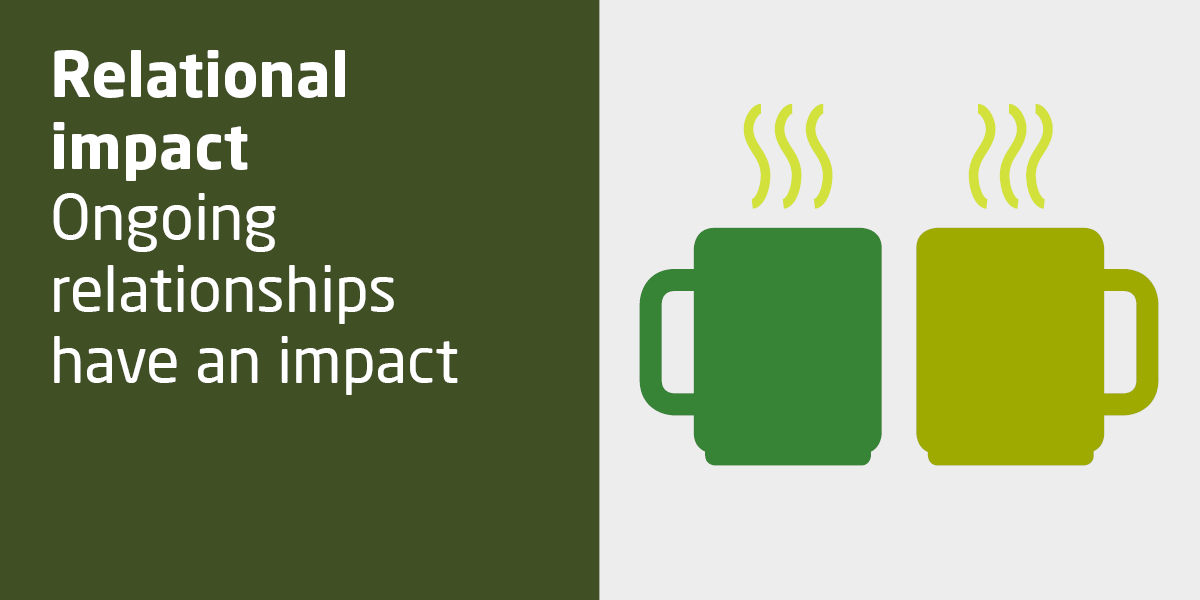 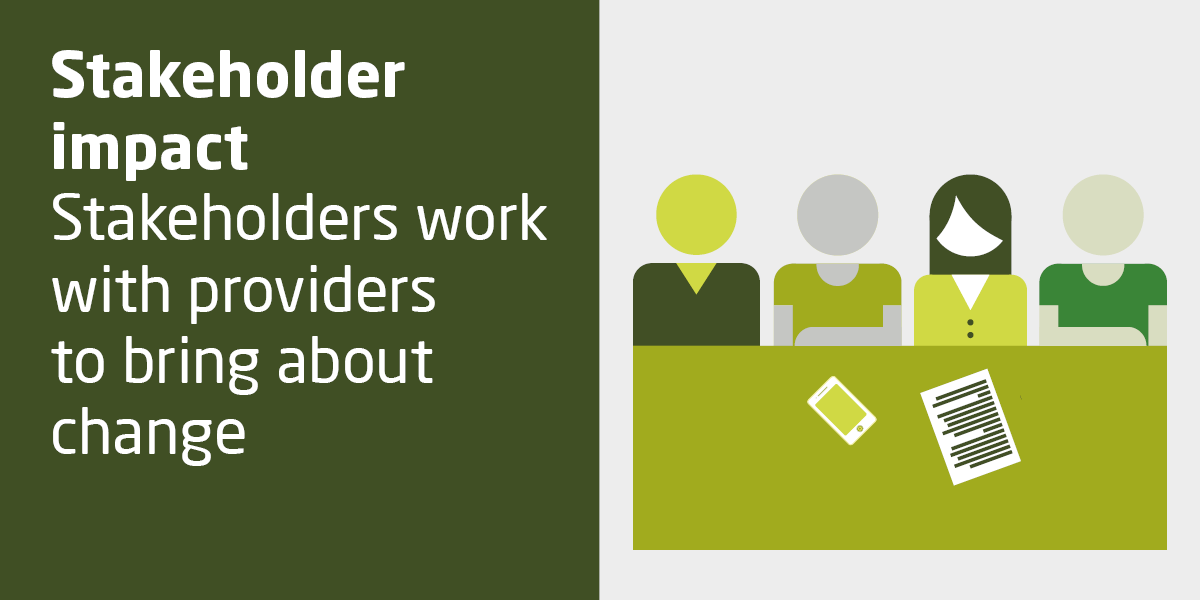 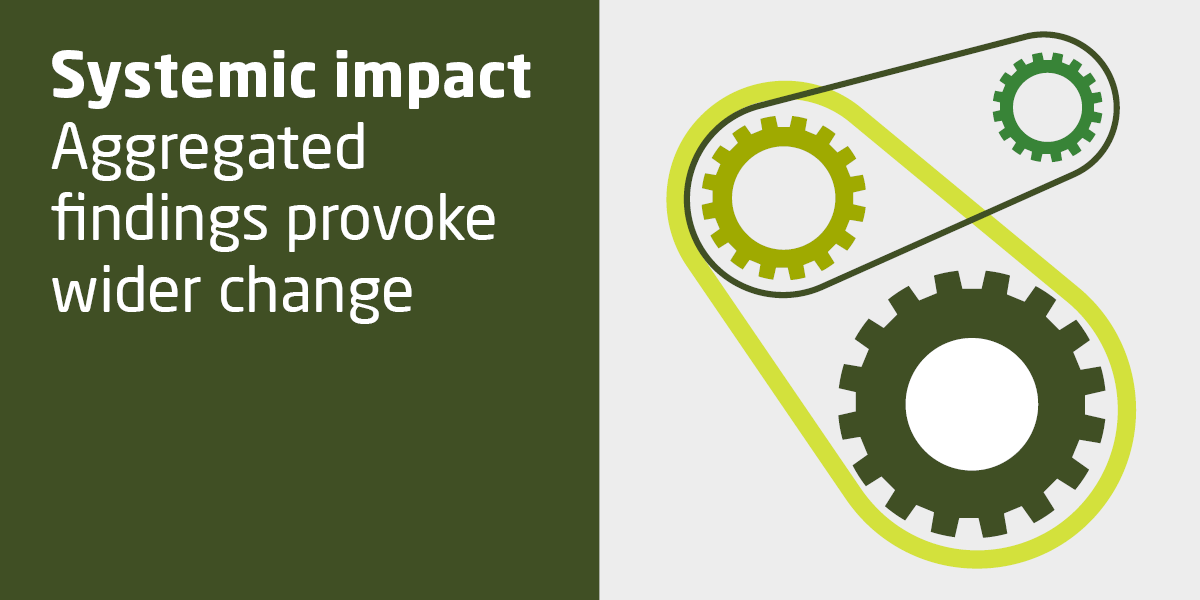 How do the different types of impact work in practice?

We used this framework to explore the impact of CQC inspection and rating in six areas of England and found examples of each type, although there was more evidence of some types of impact than others.

For example, there was a lot of evidence of anticipatory impact: the CQC set expectations of quality and providers responded to these in advance of inspection. This had some positive effects (eg, it helped some organisations to prioritise quality issues) and some negative effects (eg, some providers focused a lot of energy on getting through the inspection process rather than on improving the quality of care).

On the other hand, there was less evidence of systemic impact, and some concern that the organisational focus of CQC’s regulatory model was not well suited to an increasingly integrated health and social care system or to provider organisations that work in partnerships, chains or networks.

We also found significant differences in how impact is achieved across the four sectors that we studied. For example, a provider’s improvement capability and the availability of external support for improvement were key determinants of impact, and these were more often present in the acute and mental health sectors than in general practice and social care.

One of the most striking findings from our work was that the relationships between CQC staff and health and social care professionals and managers fundamentally affect the way regulation works and what impact it has, and contributes to the variation in providers’ experiences of inspection.

Overall, providers accepted and generally supported the need for quality regulation within the health and care system and saw the approach introduced by the CQC in 2013 as a significant improvement on the system it replaced.

What does performance data tell us about impact?

We also tried to measure the impact of regulation quantitatively.

First, we examined whether provider performance changed following an inspection by analysing routine data about accident and emergency services, maternity services and general practice prescribing. We found that inspection and rating had small and mixed effects on key performance indicators in these areas. This may suggest CQC had a limited impact in these areas, or it may be that the effects of regulation are difficult to measure with routine data sources. The impact of the CQC is also difficult to isolate from other factors affecting provider performance.

We also explored whether CQC ratings affect where patients seek treatment, by looking at the impact of inspection and rating on service volumes in maternity services. We found little evidence of parents (or their agents) exercising choice in response to ratings – receipt of an ‘inadequate’ rating seems to have little measurable impact on subsequent service volumes.

Finally, we analysed the Intelligent Monitoring (IM) dataset – a large set of routine performance indicators that CQC used to risk assess organisations and to help them decide when to inspect a provider and what to focus on. While the datasets were not intended to predict inspection ratings, we might expect an association between the two. We found that the IM datasets had little or no correlation with the subsequent ratings of general practices or of acute trusts. This highlights the limitations of risk-based regulatory models that use routinely reported performance data to target regulatory interventions.

What are the implications of our findings?

Our qualitative research shows that there are a range of ways that regulators have an impact on providers beyond directing them to make specific changes. These happen before, during and after inspection.

This may be part of the reason why our qualitative findings contrast with the findings from our quantitative research, which attempted to compare performance before and after inspection and found limited evidence of impact.

Inspection and rating have dominated the CQC’s regulatory model, consumed most of its available regulatory resources and may have crowded out other potential regulatory activities that might have more impact.

Furthermore, the inspection model we studied was focused on individual providers. However, as health and social care provision becomes more integrated, this focus will become less tenable and place- or service-based regulatory approaches that cross organisational and sectoral boundaries will become increasingly important.

Now that CQC has completed its first full cycle of inspecting and rating health and social care providers, it is implementing a new strategy for regulation that addresses some of the issues raised in our research. We welcome the greater emphasis that this strategy places on relationship management and the development of systemwide approaches to monitoring quality. We also welcome CQC’s efforts to develop a more insightful system for prioritisation to replace the IM model discussed above.

As CQC works to implement its revised strategy with stakeholders across the health and care system, our research emphasises the need to take a prospective and deliberative approach to designing, piloting and testing regulatory interventions in order to measure their impact in practice. In particular, it emphasises the need for:

CQC, other regulators and commissioners to:

CQC provider ratings and their impact on care quality

Research examining how health and social care providers, the public and other key stakeholders have responded to Care Quality Commission performance ratings.
Blog

Following on from our recent report on the impact of the Care Quality Commission's approach to regulation, Navina Evans, Chief Executive of East London NHS Foundation Trust, writes about their experience of the inspection regime.
Press release

CQC inspection regime having an impact but there is room for improvement, landmark report finds

CQC's ‘Ofsted-style’ inspection and rating regime is a significant improvement on the system it replaced, but it could be made more effective, according to the first major evaluation of the approach introduced in 2013 by The King's Fund and Alliance Manchester Business School.
Blog

How do Care Quality Commission hospital inspections measure up?

Over the past few years we have seen several high-profile failures of care in NHS acute hospitals in England, leading many in the system to question the ability of performance management and regulatory mechanisms to identify and act on poor performance.

All very interesting, however my campaigning for Supported Accommodation to be regulated continues to fall on 'deaf' ears. The FACTS: Those with Learning Disabilities and 'severe and enduring Mental Illness are placed in into this type of accommodation for many reasons: it's cost effective, often no Statutory Care Plan, 'eligibility' ignored, no Support Worker, and CHARGED for Services they don't receive via Housing Benefit forms, (completed by someone else)? if you have been awarded 'enhanced care' via PIP, you can still be left with no SUPPORT. The CQC have ONE way of 'stamping' out this 'illegal' practice, request to view the LIST of those subject to Section 117, and 'Care Plans' for those PLACED into Supported Accommodation by LAs.

This REPORT based around the CQC, has NOT understood their are thousands in the COMMUNITY left unprotected: (because they don't fit into the box).

The NAO are investigating my complaint, regarding their Auditing of the DWP HB/Subsidy Department, who are responsible for the 'set of instructions' for their 'external auditor' to follow when 'checking' Housing Benefit application, that would identify non 'EXEMPT' CRITERIA claims re HB/Subsidy repayments to a LA, and 'illegal' charges made on the CLIENT via Housing Benefit Forms, and do NOT be surprised the LA have stated 'it is possible' we have NOT identified those subject to Section 117 FREE Aftercare on these forms. This now continues to those subject to a COP Order for 'Property and Finance' who is responsible for his client finances, (who we know is just a figure head).

The above was identified by me two years ago, nobody want to investigate, the PHSO are responsible, even my MP's referral was ignored, so the NAO.

This 'vulnerable' group are completely 'exploited' by the system, even 'Service Charges' applied, but no INVENTORY taken when they took up their tenancy, and they pay out of their Welfare Benefits.

The COST to the PUBLIC PURSE is enormous, the Cost to the TENANT is enormous. The LA are the winners, along with the LANDLORD usually a Housing Association.

The TRUSTS are nowhere to be seen, the 'severely mentally ill' have now become 'invisible' to the GP, the LA and the TRUST. The only service they reserve is a Prescription, and even that is NOT monitored by anybody.

If you only listened to an expert-by-experience you would SAVE yourself millions in DATA Collection from the wrong places.

Thank you so much for sharing the insightful results of this data - the need for quality regulation is vital in all nonprofit sectors and it is encouraging to see this being practised and examined within the health and care system - there's a lot to learn from these studies for nonprofit fundraisers as well.

Putting the inspector to the test: quality ratings and the CQC

A podcast about big ideas in health and care. Episode seven: how good is care in the NHS and social care system? What does a hospital inspection actually look like? Helen McKenna talks with Chris Day, Ruth Robertson and Simon Bottery.
Blog

Following on from our recent report on the impact of the Care Quality Commission's approach to regulation, Navina Evans, Chief Executive of East London NHS Foundation Trust, writes about their experience of the inspection regime.
Blog