What are general practices?

General practices are the small to medium-sized businesses whose services are contracted by NHS commissioners to provide generalist medical services in a geographical or population area. While some general practices are operated by an individual GP, most general practices in England are run by a GP partnership. This involves two or more GPs, sometimes with nurses, practice managers and others (as long as at least one partner is a GP), working together as business partners, pooling resources, such as buildings and staff, and together owning a stake in the practice business. GP partners are jointly responsible for meeting the requirements set out in the contract for their practice and share the income it provides.

Some GPs work as salaried employees of a practice without owning a share in the overall business (so they are not GP partners). The British Medical Association (BMA) has a model salaried employment contract for these staff and practices with a General Medical Services (GMS) contract are required to offer this contract or an equal alternative to salaried GPs.

What types of GP contracts are there?

Every individual or partnership of GPs must hold an NHS GP contract to run an NHS-commissioned general practice. These set out mandatory requirements and services for all general practices, as well making provisions for several types of other services that practices may also provide, if they so choose.

The GMS contract is the national standard GP contract. In 2018/19, around 70 per cent of GP practices operated under it2. This contract is negotiated nationally every year between NHS England and the General Practice Committee of the BMA, the trade union representative of GPs in England. It is then used by either NHS England and/or CCGs (depending on delegated powers) to contract local general practices in an area.

The PMS contract is another form of core contract but unlike the GMS contract, is negotiated and agreed locally by CCGs or NHS England with a general practice or practices. This contract offers commissioners an alternative route with more flexibility to tailor requirements to local need while also keeping within national guidelines and legislation. The PMS contract is being phased out, but in 2018/19, 26 per cent of practices held one.

The APMS contract offers greater flexibility than the other two contract types. The APMS framework allows contracts with organisations (such as private companies or third sector providers) other than general practitioners/partnerships of GPs to provide primary care services. APMS contracts can also be used to commission other types of primary care service, beyond that of ‘core’ general practice. For example, a social enterprise could be contracted to provide primary health care to people who are homeless or asylum seekers. In 2018/19, 2 per cent of practices held this type of contract.

All types of contract are managed by the NHS commissioner (either NHS England or CCGs). Where contracts are negotiated locally, Local Medical Committees representing GPs may advise or participate in discussions alongside regional BMA representation.

What’s in a GP contract?

The core parts of a general practice contract:

In addition to these core arrangements, a general practice contract also contains a number of optional agreements for services that a practice might enter into, usually in return for additional payment. These include the nationally negotiated Directed Enhanced Services (DES) that all commissioners of general practice must offer to their practices in their contract and the locally negotiated and set Local Enhanced Services (LES) that vary by area.

What services can practices be contracted to provide?

General practices are contracted to perform broadly five types of service for the NHS, although some are optional.

Almost all general practices in England are part of a PCN, a small group of practices usually within the same geographical area that work together under the PCN DES contract to gain some of the benefits of working at scale and access to additional funding.

How does the money flow?

The funding a general practice receives depends on a complex mix of different income streams. Much of a practice’s income comes from its core contract agreements – meeting mandatory requirements, running essential services and operating additional and out-of-hours services where they have been agreed. This is known as the global sum payment. However, a sizeable amount of a typical practice’s income comes from other NHS sources such as the Quality and Outcomes Framework scheme (see below) or payments for providing enhanced services. Practices may also top up their NHS funding with fees for limited private services, such as sick certifications and travel prescribing. Most practice income is paid to the general practice rather than individual GPs.

Figure 1 summarises how the global sum payment to a practice is calculated. 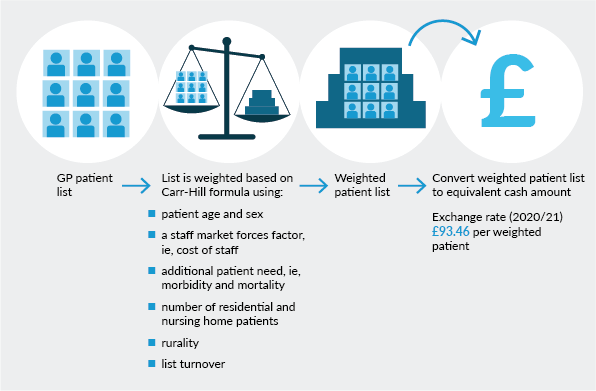 Example indicator from The Quality and Outcomes Framework 2019/20

RA002 – The percentage of patients with rheumatoid arthritis, on the register, who have had a face-to-face review in the preceding 12 months. Achievement threshold 40–90 per cent. Points: 5

At the end of the financial year, the practice receives an amount of money, based on points achieved in the Quality and Outcomes Framework.

If a practice is leasing its premises, rent is generally reimbursed in full in arrears. If a partnership owns its premises, it is mortgage payments that are reimbursed, although most practice premises are leased. Some practices sub-let rooms to other providers (for example community health services providers) but there are rules on what a practice can use its building for, which affect reimbursement.

PCO-administered payments refers to payments by the local ‘primary care organisation’, ie, the CCG or NHS England depending on delegation of powers. Payments in this category include, for example, locum allowances and appraisal costs.

What do GPs spend their money on?

Paying its workforce – including salaried GPs, nurses, health care assistants and administrative staff – accounts for the majority of a practice’s costs. These staff are usually employed directly by the GP practice and not by the NHS and so are not subject to Agenda for Change arrangements.

Partners pay themselves from the money that remains after other expenditure has been accounted for. Part of this personal income is used to pay their pension contributions, tax, indemnity, General Medical Council and other subscriptions. Partners may also decide to reinvest some of the remaining income into the practice. It is important to note that partners in GP practices are also personally liable for any losses made by the practice.

What does it all mean?

GP partners are not just clinicians but also small business owners and employers. This comes with a number of challenges, for example, the need to manage and optimise complicated income streams and personal liability for financial risks. It also means partners have a strong vested interest in maintaining and developing their practice.

Historically, the major levers for setting national or local priorities and implementing service improvements across general practice have been contractual, for example, the Quality and Outcomes Framework, rather than based on national guidance. This is still the case, although rapid transformation in the services GPs are providing in response to Covid-19 is challenging this assumption.

If local health systems are to achieve their full potential, a shared understanding of the differences between funding and contracting models for the different parts of that system will be important if partners are going to work effectively together.

How has general practice responded to the Covid-19 (coronavirus) outbreak?

General practice has seen an incredible transformation in the space of just a few weeks, in response to the Covid-19 (coronavirus) outbreak. Beccy Baird reflects on the pace and scale of change, and whether the innovations are here to stay.

I think the GP services around Portsmouth are failing because they have a call centre operating for 5 or more practices. If they just had a switchboard in each practice, patients would be able to get through to their surgery in a few minutes, instead of hanging on for an hour, just to make an appointment. Practices forget that they are there for the public, and without us, you wouldn't have a practice.

Congratulations on putting together an excellent explanation for such as myself t.e. a member of the general public who has an interest in the NHS and the care of people. It has helped unravel some of the mystery surrounding funding procedures. It provides some help at a time when the focus is on, or so it would seem, creating an arms-length approach to providing Primary Care. services.

My only negative comment relates to, as I see it, the lack of hard copy. The demands upon individuals who are involved in voluntary work for printing their own hard coy grows day by day.

Is investment in GP services increasing?

Is the promised extra funding for general practice reaching frontline services? Beccy Baird explains how the lack of national data makes this a hard question to answer.

Case study of Canada’s Primary Health Care Transition Fund to support the case for a Transformation Fund for the NHS in England.