Urgent action is needed to tackle deep and widening health inequalities in England. 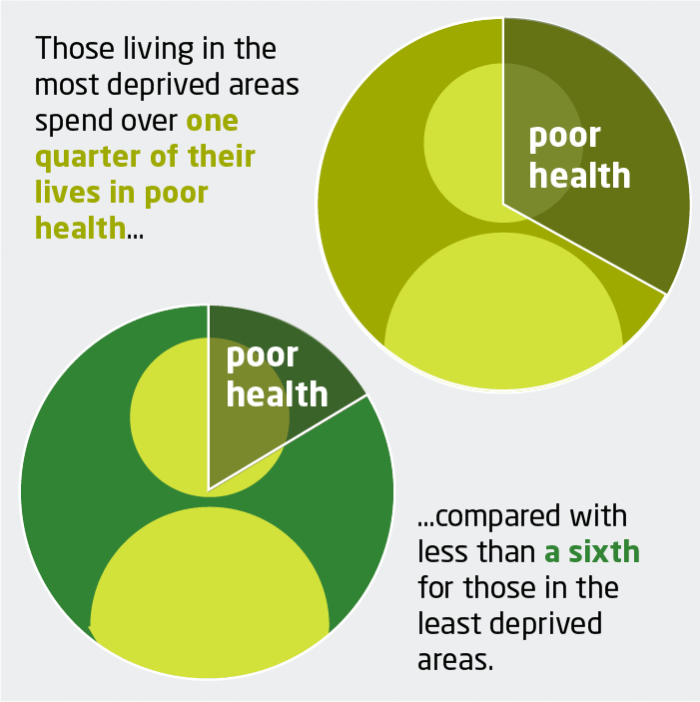 Health inequalities mean that some population groups have significantly worse health outcomes and experiences than others. These inequalities are avoidable, unfair and systematic. They are also widening according to some measures, for example, between 2019 and 2020 the life expectancy gap between the least and most deprived areas in England grew from 9.3 to 10.3 years for males and from 7.7 to 8.3 years for females.i

Inequalities in health have been starkly exposed by the Covid-19 pandemic which has taken a disproportionate toll on groups already facing the worst health outcomes, including some ethnic minority communities and people living in the most deprived areas. The economic and social consequences of the pandemic risk further worsening these inequalities.

With waiting lists set to grow significantly as more people come forward and are referred for treatment after the disruption of the pandemic, it is vital that the health and care system continues to develop an inclusive approach to tackling the backlog of care. Our analysis shows that waiting lists for hospital treatment are growing more quickly in deprived areas and that people in these areas are more likely to wait a year or more for treatment, leaving them at greater risk of their health deteriorating further.

Health inequalities are not inevitable. Evidence shows that a concerted approach, implemented through the NHS and wider policies to address the socio-economic causes of poor health, can make a difference. The most recent national cross-government health inequalities strategy was successful in narrowing the life expectancy gap between the most and least deprived communities but it was scrapped in 2010. Since then, inequalities have widened as improvements in life expectancy have slowed.

Despite individual commitment and pockets of success, the NHS has failed to make significant progress in reducing inequalities over the past decade because it has not given health inequalities as much priority as other issues such as reducing average waiting times and meeting financial targets. The NHS has a vital role to play by investing more in prevention, by working to reduce inequalities in access to services and acting as an anchor institution through leveraging its assets, spending power and role as an employer to support local economies and communities. Reducing inequalities should also be a key priority for integrated care systems, working in partnership across the NHS, local government and voluntary sector organisations.

Health and care services should be designed so that they meet the specific needs of those who are subject to inequalities, including excluded groups. For example, evidence shows that health service outreach programmes for people who sleep rough can increase their access to services.

However, these inequalities cannot be addressed by the health and care system alone. To reverse the current trend, a national, cross-government strategy that recognises the complex and wide-ranging causes of the problem is needed. This should include binding, ambitious targets and seek to address the inequalities in the socio-economic drivers of health such as housing, education and employment.

Health inequalities are avoidable, unfair and systematic differences in health between different groups of people. These inequalities are understood and analysed across four, often inter-related, factors: socio-economic factors such as income; geographic factors such as the area where people live; specific characteristics such as ethnicity, disability or sexual orientation; and excluded groups, for example, people experiencing homelessness.

In practice, these factors interact, for example, groups with particular protected characteristics, such as disability, gender and ethnic minority groups, can experience health inequalities over and above the general and pervasive relationship between socio-economic status and health.

Covid-19 mortality rates in the most deprived areas have been double those in the least deprived.

The relationship between deprivation and life-expectancy is systemic – the more deprived an area a person is from, the shorter their life expectancy on average. This relationship holds true across the whole population and is known as the social gradient in health. It is evident in higher mortality from heart and respiratory disease, and lung cancer in more deprived areas. It also manifests itself in a higher prevalence of unhealthy behaviours such as smoking, excess alcohol consumption, poor diet and lack of exercise, which are strongly related to higher mortality and higher rates of obesity in more deprived areas. The gap in healthy life expectancy (the length of time people spend in ‘good’ health) is even greater than for life expectancy – about 19 years for both males and females – between the least and most deprived areas.

Following a period where health inequalities were narrowing, gaps in life expectancy between the least and most deprived areas have widened over the past decade. While overall life expectancy increased between 2011–19, the rate of increase slowed down significantly compared to preceding decades, and the overall slowdown masked significant disparities.

Covid-19 caused a decrease in life expectancy in 2020 and has exacerbated longstanding inequalities. The mortality rate from Covid-19 in the most deprived areas has been more than double that of the least deprived. In addition, some ethnic minority communities have seen significantly higher Covid-19 mortality rates than the White British population.

The average age at time of death for people who sleep rough is 46 years for men and 43 years for women. The equivalent figures for the general population are 76 and 81 years respectively.

Inequalities can also be observed in people’s ability to access care and how they use services. For example, the most deprived parts of England have the fewest number of GPs per head and see lower rates of admission for elective care but have the highest rates of emergency admissions and attendances at A&E.

Veena Raleigh examines trends in life expectancy at birth up to 2020 and the impact of Covid-19 in 2020, gender differences, inequalities, causes of the changing trends since 2011, and how the UK’s life expectancy compares with other countries.

Delivering health and care for people who sleep rough: going above and beyond

People who sleep rough have some of the worst health outcomes in England. We explore how four local areas are delivering effective health and care services to people sleeping rough and what other areas might be able to learn from them.

Anna Charles sat down with Professor Kevin Fenton to learn more about the findings of Public Health England's review of disparities in risks and outcomes of Covid-19, his career journey, and his hopes for health and wellbeing in London.
Blog

Tackling poverty: how can collaboration and data help drive success?

The King’s Fund is working in partnership with the Centre for Progressive Policy to look at how data can inform priorities, challenge effectiveness and promote action on tackling poverty.
Paid event

This explainer provides an overview of how health inequalities are experienced in England’s population.
Blog

The government has stated that smoking is responsible for half of the inequalities gap in life expectancy in England – will the ideas in an independent review close that gap?