Growing demand and a shortage of GPs has left general practice creaking at the seams; reform must go hand in hand with new investment to improve access to high-quality care.

General practice is in crisis because of difficulties in recruiting and retaining GPs and a growing and increasingly complex workload. This is impacting on patients, who are finding it harder to get appointments when they need them.

Our research indicates that the total number of contacts with patients in general practice increased by 15 per cent between 2010/11 and 2014/15.

National leaders have made important strides forward in addressing these issues through a new GP contract that aims to bring much-needed investment, reform and additional staff. Practices will be required to work differently, coming together at scale in primary care networks, with teams of health professionals working closely together to deliver a wider range of services and to extend access for patients.

The development of primary care networks is welcome, but the scale and complexity of implementation should not be underestimated. Networks will need support to embed new staff roles and to develop the leadership needed to enable joint working among multi-professional teams. Outdated primary care buildings and IT infrastructure will provide significant challenges to implementation. Efforts to retain and recruit more GPs will need to continue alongside the introduction of new roles.

Effective primary care, including general practice, is the bedrock of a high-quality and cost-effective health system. But general practice is under strain as it struggles to deal with a rising workload that is becoming more complex and intense. While there is no national activity data that allows us to accurately quantify the change in activity, our research indicates that this has risen significantly due to a combination of rising demand, growing complexity, higher expectations, increased administrative burden and rising thresholds for referral to other parts of the system.

Despite more GPs entering training, the overall number has been falling as many are retiring or reducing their hours. Fewer GPs are choosing to work full time in patient-facing general practice (eight or more half-day clinical sessions per week), often due to the volume and intensity of the workload. The government's target to recruit 5,000 extra GPs by 2020 will not be met. 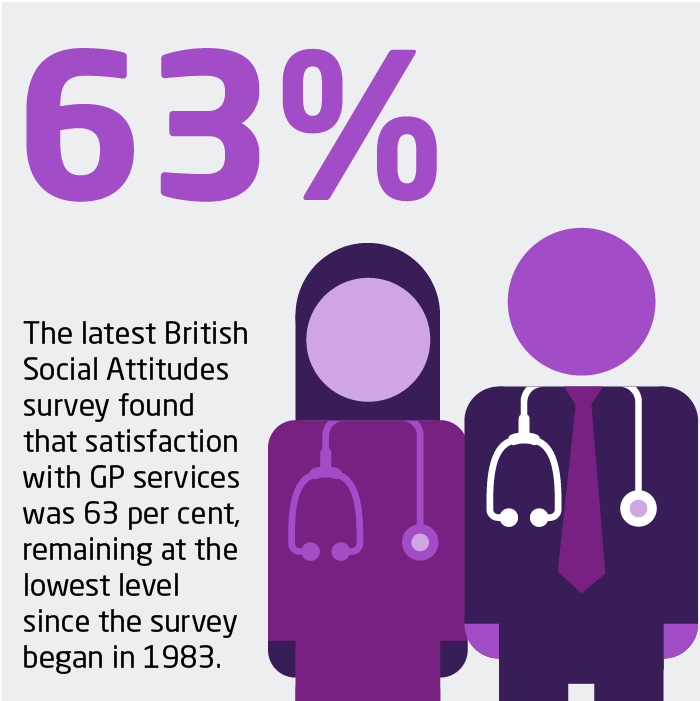 These pressures are affecting patients' experience of general practice. Although patient satisfaction with the care they receive remains high, the GP Patient Survey and British Social Attitudes survey both show declining satisfaction in recent years, driven by problems accessing appointments.

Real-terms financial investment in general practice has been increasing since 2013/14 after some years of decline, and the NHS long-term plan promises further investment.

In recent years, national policy has focused on improving access, with GPs required to offer extended hours and weekend appointments. A growing number of practices are adopting new access routes such as video consultations, email consultations and telephone triage. While these approaches can help patients to get appointments when they want them, they require careful implementation and significant changes to the way GPs manage their work. New forms of access must also be designed in a way that does not increase health inequalities and can work effectively with other local health and care services.

The General Practice Patient Survey reported that 60 per cent of patients who accepted a GP appointment were able to get an appointment at a time they wanted or sooner.

Following the introduction of the new GP contract, which channels new money direct to general practice, GPs have come together in primary care networks covering populations of around 50,000. Networks will receive additional funds to support the introduction of new clinical roles into general practice teams including pharmacists, physiotherapists, paramedics and community link workers.

NHS England has significant ambitions for primary care networks, expecting them to be a key vehicle for delivering many of the commitments in the NHS long-term plan. They will be required to deliver a set of seven national service specifications by introducing new roles into general practice, working in multidisciplinary teams with community and social care services and proactively managing the health of their local population. Critically, they will also need to shore up core general practice provision to ensure access to high-quality, sustainable primary care.

A key part of the NHS long-term plan, primary care networks (PCNs) will bring general practices together to work at scale. But what are they? How are they funded and held accountable? And what difference will they make? Beccy Baird explains the latest form of GP collaboration.
Long read

Public satisfaction with general practice is lower now than it has ever been, while the number of people reporting difficulties in booking appointments continues to grow. We run through the proposed solutions to issues around GP access and consider their potential effectiveness. 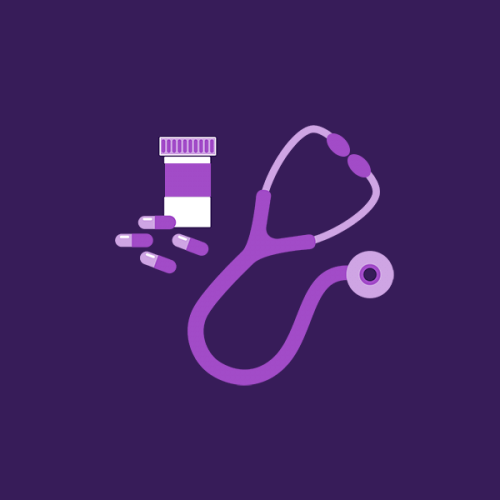 We look at innovative models of general practice from the UK and other countries and identify key design features we believe will be important in designing effective GP services in the future.
Report

The future of general practice: the views of GP trainees

With more doctors than ever training to be GPs, why is there still a workforce crisis? We asked trainees about their thoughts and future plans.

The new NHS and mental health: where are we going wrong?

This report, published jointly by The King’s Fund and the Centre for Mental Health, explores the opportunities the emergence of primary care networks creates for improving the support and treatment provided to people with mental health needs.
Paid event

This explainer sets out how general practices are contracted and paid in England, looking at the services they are contracted to deliver, and the different streams of funding they receive.