In its 2005 manifesto the Labour party promised sustained investment in the NHS to deliver its commitments to reduce waiting times, expand the NHS workforce and improve buildings and facilities. Specifically, it pledged to triple spending – compared to 1997 levels – by 2008.This reiterated the commitment made in the 2004 Comprehensive Spending Review.

Did Labour meet its spending commitment? 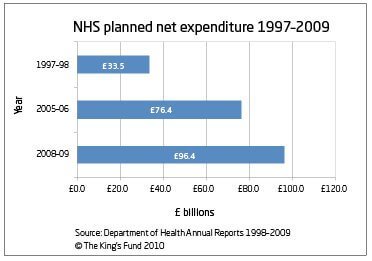 This represented a sustained increase in real terms, continuing a trend that started a decade ago, when Tony Blair pledged to bring health spending up to the EU average. Expenditure in real terms is projected to have increased by nearly 7 per cent each year between 2000/01 and 2010/11, compared to average increases of 4 per cent over the lifetime of the NHS. This represents the highest sustained increase in funding since the NHS was established (figure 2). 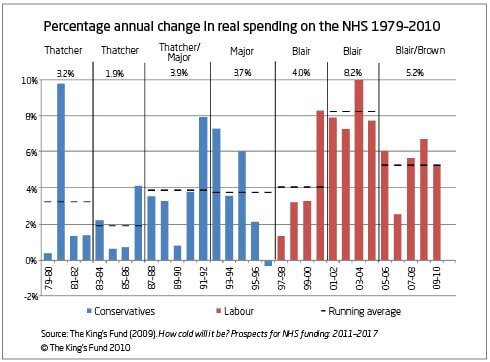 NHS spending is now much closer to the EU average of the 14 countries (excluding the UK) that made up the EU when the pledge was made in 2000. Over the past ten years, UK health expenditure as a share of national income has increased by nearly 3 percentage points to around 9 per cent. However, as spending in the other 14 countries also increased over the same period, UK expenditure was still slightly below the average in 2006/07 according to the most recent comparable data available (figure 3). 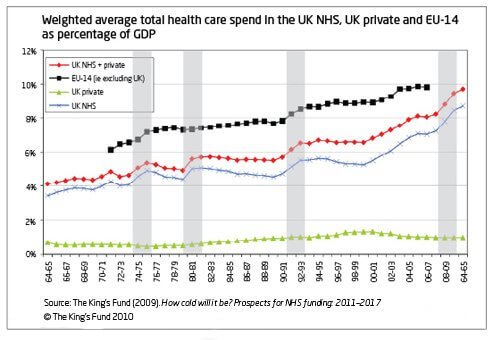 Where has the money gone?

Some of the extra funding since 2000 has been absorbed by inflation but has also bought more staff, equipment and buildings and improved access to services. Nevertheless, productivity (the ratio of inputs to outputs as measured by the Office for National Statistics) declined by an average of 2.5 per cent a year between 2001 and 2005.

How will spending levels change in future?

The impact of the economic downturn on public finances means that the increases enjoyed over the past decade will not continue. The current Labour government has pledged to stick to its planned increase in NHS spending in 2010/11, which will take the total NHS budget to £105.8 billion. Thereafter, frontline NHS spending (defined as 'the 95 per cent of spending that supports patient care') will rise in line with inflation in 2011/12 and 2012/13. The Conservative Party is committed to 'protecting health spending in real terms' but has not given any more details about its spending plans.

A recent report by The King's Fund and researchers from the Institute of Fiscal Studies estimated that demographic pressures alone are likely to cost the NHS an additional £1.1-£1.4 billion a year at 2010/11 prices, requiring average funding increases in real terms of around 1.1 per cent a year in order to meet demand.

The NHS employs 1.4 million staff and has a budget of around £100 billion, so it needs to be managed professionally. We set out the key facts about managers in the NHS.

Did Labour deliver choice in the NHS?

Extending choice for patients over where and how they want to be treated has been a priority for the Labour government. Has it delivered choice in the NHS?