Forget Brexit, there is a longer-running political failing: about how we treat the most vulnerable in our society. In 2014 I was proud to work with The King’s Fund on an independent Commission looking at the ambitious topic of a new settlement for health and social care. The Commission’s core conclusion, which still stands, was that, while health entitlements are generous, entitlements for social care fall well short of what is needed to enable older and disabled people to secure a decent standard of care. Further, the complexities around social care leave even the most confident clients and their relatives exhausted by the effort of grappling with the system. In its final report, the Commission argued both for much better social care funding (and suggested ways to raise additional funds) and a simpler pathway through the care maze.

Five years later, there has been no adequate government response to these issues, and no real debate about entitlements and funding. In late 2017, when I was asked to become a member of an advisory group for a Green Paper on social care, my hopes were briefly high that, at last, there would be serious efforts to tackle this difficult problem. But now it’s late 2019 and no Green Paper has appeared, despite extensive and useful discussions. The main party manifestos all suggest better times ahead – but lack detail and don’t really meet the funding challenges.

Uncertainties around Brexit have not helped – generating caution about new fiscal commitments and even greater reluctance than normal to take the political pain of introducing increases in taxation. This is understandable – though it became less so this autumn when other priorities were suddenly allocated increased funding. Less forgivable was the failure even to embark on a systematic campaign to inform, shape and garner public opinion. It is a cliché that there is poor knowledge of the social care system – yet changing this is left to the work of think-tanks and journalists such as the BBC’s indefatigable Alison Holt.

Social care provision is a complex issue – and needs solutions that go beyond ensuring no one has to sell their home to pay for care. The challenges around social care need to be highlighted by politicians, day in, day out, to bring reality into clear view. Statements such as 1.5 million people with unmet social care needs are abstract. A one in seven chance that you will end up living with an unmet care need is all too real. Unmet need for health care on this scale would be regarded as a scandal.

What are the main problems and what should be done?

Funding for adult social care has decreased by 2.5 per cent in real terms since 2010/11 while demand has risen significantly.1 There is significant unfunded need among those who cannot afford to pay for care but fall below local authority thresholds for publicly funded care. We must restore entitlement to care for many of those whose level of need is currently judged insufficient. This will require significant funding.

Individuals and their families should be protected against the catastrophic costs associated with long-term social care. Sir Andrew Dilnot has laid out on many occasions that this is the last big unpooled risk in the United Kingdom, and that fixing this is relatively small – less than £2 billion a year for some proposals for the level of a cap, in the context of a health budget of more than £130 billion in England.

There is a need for more joined-up services – most individuals and carers struggle to understand the system they are faced with and waiting periods for decisions about eligibility and funding are often too long. There are now more places where health and social care professionals work well together. But the very different funding regimes still make this harder work than it should be for clients and staff alike. The Commission’s proposal of a ring-fenced budget for health and social care could make this more straightforward.

Funding a settlement that addresses these issues cannot be ducked and goes well beyond the bill for the cap. For the short-term crisis some of our suggestions from 2014, such as higher National Insurance for the over-40s and means-testing some old-age benefits – should be floated soon to the wider public. And looking to the longer term, once there is a cap compulsory insurance could well play a role. But this longer-term plan should not distract us from the chronic need staring us in the face today.

And funding is not the only thing in short supply; there is also an issue with under-staffing. Working in the social care sector is too often relatively poorly paid and stressful – resulting in an estimated 7.8 per cent vacancy rate – well above that for the economy as a whole. Much caring is also done by unpaid family and friends – this should not be replaced but must be supported properly.

New governments should bring new hope. Social care is complex, poorly understood and faces enormous challenges. Common decency makes it essential to do better now for our ageing population by putting social care funding on to a secure footing. The next government must make a swift start on a wide-ranging public consultation, and at the same time tackle the immediate funding shortfall and workforce challenges. This should not then be undercut by political point-scoring – the parties must tackle this together. The continued daily suffering of those in need is surely intolerable. 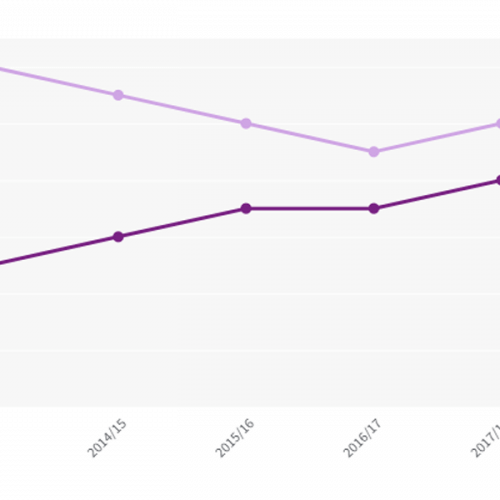 The social care system is not fit for purpose and is failing the people who rely on it, with high levels of unmet need and providers struggling to deliver the quality of care that older and disabled people have a right to expect.

Updated with 2018/19 data, our 360 review outlines and analyses 20 key trends in adult social care in England over recent years. Using a variety of publicly-available data, it provides a uniquely rounded – ‘360 degree’ – view of the sector.
Blog

Back in the ‘too difficult’ box: social care and the manifestos

It’s not only about what is in the manifestos, it’s also about what isn’t. Sally Warren takes a look at whether parties are addressing the long-running challenges around social care.