In 2018 we highlighted how the staffing of NHS mental health providers was having an impact on quality of care. This year’s annual CQC State of Care report highlights staffing as playing a key role in the deterioration of care. But a review of the latest mental health trust board papers indicates how systemic this issue has become.

The first indicator of problems around staffing is on inpatient wards where monitoring and reporting of safe staffing is mandatory. Registered nursing vacancies are now routine across mental health trusts and although managers continue to fill vacancies with bank and agency staff, there are increasing examples of neither being able to meet demand. The most common response is to increase the number of unqualified staff, but moving nurses from other wards to provide cover, ward managers and matrons providing direct care, and substituting registered nurses for other registered professionals, such as occupational therapists, also appear to have become part and parcel of practice.

There are no minimum staffing levels or ratios for mental health wards but it’s clear that many trusts are aware of the compromises they are having to make. As the board papers of one trust reflect:

‘Over the six months the trust had declared safe staffing levels but the high use of temporary staff meant that care and patient experience were not always optimal.’

Examples of this impact include cancellation of ward activities and escorted leave – which may sound minor, but for those detained under the Mental Health Act they are a break from the monotony of ward life and have therapeutic value. More seriously – among trusts that have started to systematically join the dots between staffing and quality – staff shortages were identified as contributing to increased violence on wards and in one case a homicide. Our review found that more than one trust had had to temporarily close beds due to staff vacancies; in others suspension of admissions had come as a result of CQC action.

The second indicator is in services where there are national access standards or national service specifications. Most notable were vacancies in CAMHS teams where high levels of demand coupled with staff shortages led to long waiting times and restriction of access.

‘CAMHS eating disorder service is under acute pressure with a huge increase in referrals and a number of vacant posts. All referrals are screened but owing to demand and capacity issues, they are unable to offer assessments and interventions to all where it is identified that eating is an issue.’

Perhaps more surprising is that similar issues were reported in Improving Access to Psychological Therapies (IAPT) services. The scale and capacity of the IAPT workforce have been perceived as a potential opportunity for supporting primary care, so finding that some trusts have high vacancy rates for psychological wellbeing practitioners suggests this may not be a viable option.

A third indicator notable from our review is the prevalence and impact of medical vacancies. A census by the Royal College of Psychiatrists found that almost one in ten consultant psychiatry posts in England was vacant, while our own review found examples of trusts with one in four medical posts vacant. One of the most consistently reported impacts of psychiatry post vacancies is on the capacity to complete assessments in community mental health services. The consequence is long waiting lists for initial assessments and delayed completion of risk assessments for those already under the care of teams.

‘I imagine the experience for the service user is one of being unimportant, forgotten about and no care, probably often repeating childhood patterns of neglect.’

So these issues are affecting different professional groups, and different care settings, with significant implications for patients. The implementation of new standards along with national programmes focused on workforce capacity and safe staffing are playing a role in improving trust data on workforce, but the scale of vacancies and their consistent impact on quality of care is a cause for concern. Perhaps the strongest indicator, however, is that trusts are taking action to mitigate national shortages in nursing and psychiatry by redesigning the workforce to replace these roles on a permanent basis. Examples include development of substantive non-clinical roles, such as activity co-ordinators on inpatient wards, and the expansion of approved clinicians and non-medical prescribers within community teams.

Mental health providers spend a bigger proportion of their income on workforce than other providers do – that’s because for the most part mental health care is interpersonal, and that’s reliant on having a healthy and effective workforce. Although efforts to improve retention of mental health nurses are showing a positive impact on numbers nationally, this goes nowhere near to addressing the scale of current vacancies. Board papers describe how the constant need to find staff detracts from clinical care on wards, how vacancies result in missed staff breaks, inability to attend training or provide supervision, and increase the workload and intensity of work for substantive staff. This in turn impacts on moral, sickness and turnover.

The vacancy figures should speak for themselves but it’s how this plays out on the ground which really brings it to life. As one trust puts it:

‘… organisational assurance is totally dependent on all of our staff doing the right thing all of the time in terms of robustly managing the risks and issues of delivering care in a mixed-sex environment and adhering to the clinical algorithm. This situation is exacerbated with the use of temporary staffing and lean staffing models across the inpatient services.’

Factors such as inappropriate estate confound this issue. But in a system that is totally dependent on all of the people ‘doing the right thing all of the time’, ambitions outlined in the long-term plan to improve the quality of mental health care will fail without an equally ambitious plan to address staff shortages.

Note on the analysis

This blog is based on a review of the latest board papers for 53 NHS mental health provider trusts.  The quotes comprise text extracted from individual board papers which are illustrative of the issues identified across organisations.

Rising demand for services and systemic staff shortages are putting NHS staff under increasing pressure. What impact is this having on sickness absence rates in the NHS, and what can be done to reduce the pressure on staff? 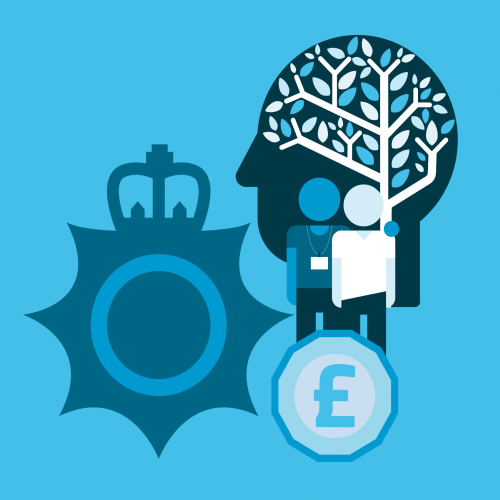 On the front line: policing and mental health

Evidence based is a play on words. It is not what the term suggests. The so called "evidence" of a recovery for example, is not a recovery as most people would understand it. Effectively, IAPT breaks the human being into sections, The patient is not allowed to deal with their central problem. but is coerced into having a small aspect of their problem treated. They will be invited on to a fairground ride of 'profit friendly treatments'.

In IAPT, over a great many months or years, patients will be given seperate treatments treating, anxiety or stress, or OCD or some other split off aspect of the whole person. Upon each element being treated, IAPT will attempt to manipulate the opinions of the outside world by claiming that at all satges different stages, that the patient has gone into 'recovery'. This is nonesense. It is wholly dishonest. What IAPT figures will not reveal, is that the person may leave their building as the end of all this series of manipulations, and be still living with their central difficulty completely untreated. The best description I have heard of IAPT is that it is a cult. It uses fake descriptions to fool everyone that they are dealing with the tragedies of peoples lives though in truth, they are simply picking off the parts of someone's experience that they can earn a quick buck on.

Yes, IAPT practices a highly distorted. It will be seen in years to come as having done a great deal of harm because their business approach is nothing less than a contrived con. A trick that was 'signed off' by the gullible duo, Tony Blair and Gordon Brown. The Conservatives have failed to understand just how the Labour gullible the government was, and mental health issues are rocketing - partly because IAPT is sending people away with their true conditions untreated.

Perhaps you can hardly beleive what I have told you. When you find out that it is true, remember where you saw it first.

As this year’s party conference season comes to a close, what have we learned about the main parties’ priorities for health and social care? Richard Murray weighs up the key commitments, from funding and the NHS workforce to social care reform.
Long read

On 7 January, the NHS long-term plan was published setting out key ambitions for the service over the next 10 years. In this explainer, we set out the main commitments in the plan and provide our view of what they might mean, highlighting the opportunities and challenges for the health and care system as it moves to put the plan into practice.
Report

Our report finds that the spending gap between NHS acute hospitals and NHS mental health providers is widening.
Blog