Changes to pensions tax policy do not generally quicken the pulse or grab the headlines. But in recent months both have happened as pensions tax rules have been linked to patients having operations cancelled and clinicians considering early retirement. The issue has reached such prominence that the new Prime Minister has personally committed to the problem being solved. So what is happening, and why are these changes to pension tax so important?

The actual details of the pensions tax changes are mind-bogglingly complex. Luckily, organisations such as the HFMA, NHS Employers, Which and the Financial Times have published reports that demystify everything from the tapering annual allowance to adjusted income thresholds. But underneath the detail, there are three things at the heart of the issue. First, to encourage people to save for retirement, workers can get tax relief on their pension contributions – but the rules for how this works have been changed in recent years to reduce the amount on which people can receive tax relief. Second, although these pension changes affect workers throughout the public and private sector, the NHS is particularly exposed because of its relatively inflexible and nationally-determined pay and pensions policy. And third, as a result of these changes, some higher earners who get promoted or take on additional NHS work – such as extra operating lists put on in evenings – are now facing large and unexpected tax bills.

'It is clear the pension changes are having a real and immediate impact on patient care.'

The net impact of all this is that hospital consultants, GPs, nurses and managers are turning down additional work and promotions to avoid these big tax bills (Figure 1). It might hard for many to empathise with this issue given the considerable size of the pension pots and salaries that will be ensnared by the pension changes. But it is clear the pension changes are having a real and immediate impact on patient care, with reports of cancer scans going unread and weekend and evening operations being cancelled. The BMA has described the pensions issue as ‘the greatest immediate threat to our medical workforce capacity and, consequently, to patient services.’ 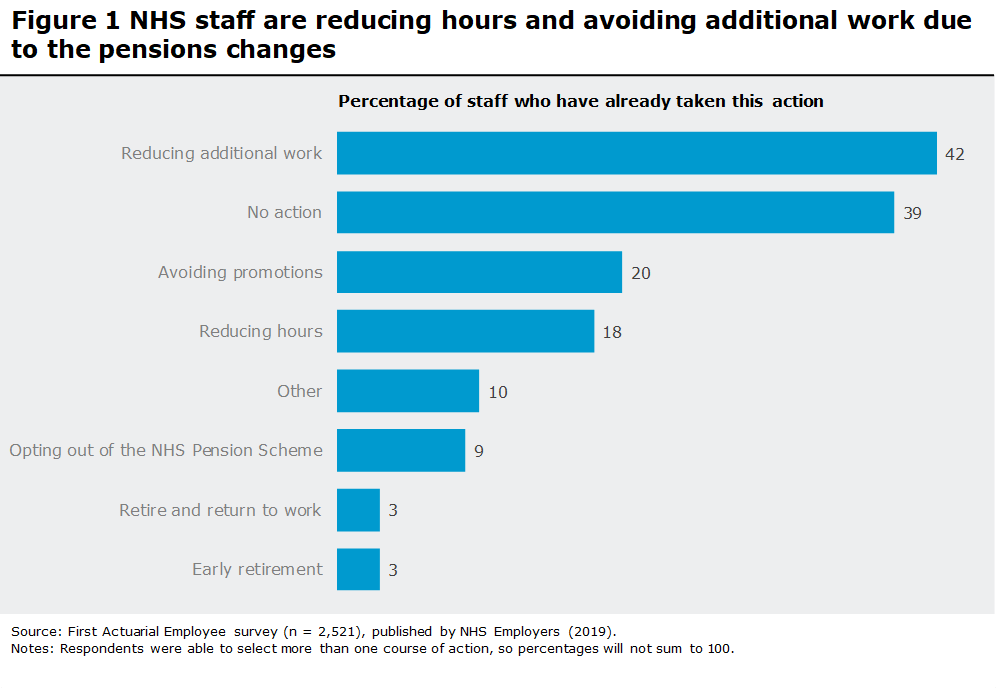 But in addition to its immediate impact, the story of the NHS and pensions tax changes is worth looking at because it is a good illustration of three wider issues.

The first is a reality check on NHS exceptionalism. For those who work in or around the NHS, it is easy to believe that the service is first among equals when it comes to public services. Public polls showing the NHS is what that makes us proudest to be British and NHS funding deals that are struck outside of the formal spending review process only reinforce this belief.

But the past five years provides myriad examples that when it comes to important – albeit technocratic – national policy issues, the NHS is not different in the eyes of HMRC and the Treasury. Attempts to integrate primary and secondary care by forming new legal entities have been scuppered by VAT liabilities. Plans to merge organisations have been delayed due to competition law. And bursaries for nursing, midwifery and allied health professionals were removed from 2017 to bring these degrees in line with the rest of higher education.

The second issue the pensions crisis has raised is the invidious separation of managers and clinicians. In response to the pensions crisis, the government recently announced a consultation process under the banner headline ‘top NHS doctors to be given more flexible pensions’. Beneath the headline it becomes clearer that nurses and other clinicians would be included in any proposed remedy to the pension problems, but it is equally clear that managers will be excluded under current plans. Treating NHS managers as second-class citizens is a time-tested way for politicians to play to the galleries. But our joint report with NHS Providers into leadership vacancies shows the cost of this approach, with key board roles such as director of operations, finance and strategy roles experiencing high vacancy rates and short tenures – something the pensions issue will only exacerbate.

Seeing the headline on the pensions consultation helped connect two conversations in my mind. The first was with a hospital chief executive, who told me his trust had seen nine different chief operating officers take – and then leave – their seat at the board table in the past five years. The second conversation was with a deputy director of operations who was turning down her first chief operating officer post, because of the impact the promotion would have on her family’s finances. The current pension problems are shared across clinicians and managers, which makes it especially disappointing that the government’s response will divide these two groups.

'There has been a striking lack of urgency in how the government has responded to pensions crisis.'

The third issue is the realisation that the NHS workforce crisis has not reached ‘break-glass’ territory yet for all parts of government. With 100,000 clinical vacancies in NHS trusts, you would imagine that any potential solution to ease NHS workforce pressures would be seized upon, and every potential problem tackled as soon as it emerged. But instead there has been an inconsistent response from government to NHS staffing pressures.

On the positive side, the Migration Advisory Committee is now recommending that more occupations should be placed on the shortage occupation list to ease staffing pressures. And as part of his Prime Ministerial bid, the Secretary of State of Health and Social Care announced he was in favour of free movement of people for all doctors and nurses from any part of the world. In contrast, and even accepting the glacial pace at which pension rules change, there has been a striking lack of urgency in how the government has responded to pensions crisis, particularly at a time when one hospital chief executive said the problem is ‘escalating daily’.

So where does that leave us? For now, in uncertain times. The consultation on resolving the pensions crisis remains open, but initial reactions suggest that there are no easy solutions. And this week the Government announced that further changes to the NHS pension scheme will now be considered as part of the consultation. For an NHS that is already feeling the impact of a staffing crisis, and patients who are experiencing record waits for both planned and emergency treatment, we can only hope the new Prime Minister makes good on his promise that he can fix what has so far proved to be an intractable problem.

On 7 August 2019, the government announced a new public consultation on changes to NHS pension rules. The consultation proposes options to give senior clinicians greater flexibility over the amount they can accrue in their pension pots. But NHS managers are still excluded from these new proposals and it is still unclear whether these additional proposals will fully address the concerns of clinical staff. Read The King's Fund's full response to the announcement.

Subscribe to our newsletters to stay up-to-date with the world of health and social care, and get the latest news and views from The King's Fund.

the old adage of "if you didn't earn it you don't pay it " is true and there are lots of hgh earners who say why is the NHS any different to the other essential service providers , where do you draw the line in "special " cases and of course it gives to the lie of we are doing for altruistic reasons