I no longer understand the strategy for elective care in England.

For most of the past 20 years the approach was fairly straightforward. The priority was to improve access to planned elective treatments like routine hip and knee surgery. A new target was created to treat the majority of patients within 18 weeks of referral to place greater focus on this goal. And the target mattered: NHS hospitals would be fined if patients waited too long for care, and the term ‘waiting list initiatives’ entered the NHS lexicon as hospitals paid staff a premium to provide extra clinics or operating sessions over evenings and weekends to speed up access to treatment.

Alongside this, greater use was made of private providers to meet the demand for care, and a new payment system was created so that ‘money followed the patient’ and hospitals were financially rewarded for improving access. At the zenith of this era, the talk was of building more ‘surgical factories’ to centralise resources and efficiently deliver greater volumes of elective care.

But over recent years, as financial and staffing pressures have dramatically increased, the supporting pillars of this strategy have been pulled away one by one. To relieve pressure on commissioning budgets, hospitals are increasing moving to payment systems where the financial incentive is to contain activity rather than increase it. And despite the NHS Constitution enshrining the right of patients to start treatment within a maximum of 18 weeks, this target has now been effectively deprioritised.

The 2018/19 NHS planning guidance reiterated a desire to tackle extreme waits by halving the number of people waiting over one year for planned care, but then broke with tradition (and the Constitution) by asking the NHS to focus on the number of people on waiting lists, rather than whether these patients were treated within 18 weeks:

'Commissioners and providers should plan on the basis that their RTT waiting list, measured as the number of patients on an incomplete pathway, will be no higher in March 2019 than in March 2018...'

So how did the NHS perform against these new, more limited ambitions? While the NHS successfully halved the number of patients waiting over a year for care, the latest data for March 2019 show that rather than being maintained at its March 2018 levels, the size of the overall waiting list increased by 5 per cent by March 2019 (see Figure 1). A recent report by the National Audit Office (2019) highlights some of the reasons for rising pressures on elective care, which boil down to a lack of staff, a lack of hospital beds and a lack of financial resources to cope with increasing demands for care. 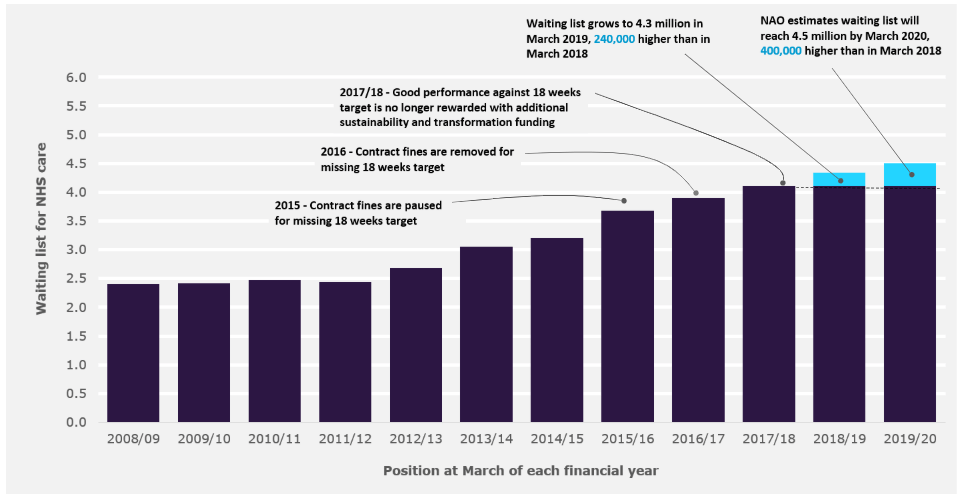 Note: Not all trusts report waiting time data in every period. NHS England data for March 2008 to March 2019 in include estimates for trusts that did not report data during this period. The NAO estimate for March 2020 does not including data from missing trusts. The waiting list grew by 5 per cent between March 2018 and March 2019 for providers that reported data in both periods.

Despite the failure to achieve this new ambition for planned elective care, NHS England and NHS Improvement are doubling down on their expectations for the 2019/20 financial year, stating:

'Building on the expectation that providers will deliver March 2019 waiting lists at the March 2018 level, we expect that all providers will further improve their waiting list position during 2019/20 and that their capacity plans will demonstrate how they will increase elective treatment so that the waiting list number will decrease.'

This aspirational target reflects both the triumph of hope over experience given the pressure services are under and the consequences of moving away from a series of policies that were designed to fit together to prioritise speedy access to care. The National Audit Office (2019), estimates that under current trends the waiting list for planned care will not be maintained or reduced – it will grow to 4.5 million people by March 2020.

The National Audit Office also estimate that reducing the waiting list to the levels of March 2018 will cost an additional £700 million – a substantial sum for a service that is meant to be investing more in primary and community care under the NHS long-term plan. As we, and others have said, the new funding deal for the NHS is welcome, but it is not a bonanza. The £20.5 billion promised to the NHS was never going to be sufficient to restore financial balance, recover key waiting times, and support the much-needed transformation of services – which only highlights the importance of setting realistic targets for the NHS.

So where does all this leave us? In a place of strategic uncertainty perhaps, but with three things to consider.

First, as banal as it sounds, elective waiting times are still important. The ‘waiting list’ is made up of over 4 million people. People who need consultant-led care, who may be living in pain, who will be seeking help from other services such as primary care, who will be debating if they can muster the resources to self-fund their care. Reducing waits for planned care was one of the totemic offers the NHS made to the public in return for record levels of investment, and as Simon Stevens, the head of the NHS, said last month: ‘short waits [for routine care] definitely matter’. The national bodies must now show they have a new strategy to deliver these short waits.

Second, that strategy must encompass more than a change to how waiting times are measured. The NHS Clinical Standards Review is considering changes to the 18 weeks target, but changing targets will not solve the underlying financial, staffing and demand pressures that have led to long waits in recent years. The recent switch to focusing on the size of the waiting list has already been a distraction from the core issue of how long patients are waiting for care – and as others have pointed out may have introduced perverse incentives to prioritise patients with less complex care needs. If changing the targets is not the full answer, then some more substantial hope comes from the work of local integrated care systems that are seeking to reduce waits for care not by only by working harder but by working differently. Some systems have already seen reductions in referrals for planned care by working as one system rather than a collection of disconnected organisations.

Third, and perhaps the simplest lesson from the past year – it is time to stop setting new targets the NHS has no realistic hope of meeting. In recent years frontline NHS leaders have been set new ambitions for reducing delayed transfers of care, reducing the number of patients ‘stranded’ in hospital, maintaining the size of the waiting list for planned care, improving accident and emergency waiting times and achieving financial balance. Each of these ambitions were then missed or deferred, which can only harm staff morale and the credibility of policymakers. No doubt there is a balance to be struck in setting ambitions that are both stretching and achievable. But if we keep getting this balance wrong, we will only succeed in setting the NHS up to fail.

Waiting times in accident and emergency (A&E) departments are a key measure of how the NHS is performing. In recent years, patients have been waiting longer in A&E here we look at why that is.
Long read

On 7 January, the NHS long-term plan was published setting out key ambitions for the service over the next 10 years. In this explainer, we set out the main commitments in the plan and provide our view of what they might mean, highlighting the opportunities and challenges for the health and care system as it moves to put the plan into practice.
Long read

The NHS is fundamentally a set of queues into which patients are placed to receive treatments. Computers (at the heart of IT systems) are also a set of queues into which work items are placed to receive execution. It’s a well understood property of computer systems that the bigger the queue the more resources are needed to manage it. Within a finite set of resources this means that less resources are available to execute the work items. The same seems to be true of the NHS. As the queues grow more and more effort is exerted on managing the queues and investigating why they are building and their servicing is decreasing. At any given time the NHS is a finite resource with respect to execution skills and the finance to support these. More efficient handling of queues is a perpetual goal in computer systems but this is often aimed at the avoidance of a complete queue stoppage due to an architectural limitation like the maximum number of entries in the management of the queue. In the end though more resources have to be added to service the queues. The NHS faces the same challenges. Firstly, to implement better systems to manage the queues and then apply greater skilled resources to service them. In short; once a queue becomes greater than one in depth managing it eats away at the whole system resources. The design point for real efficiency of the NHS should be to have queue depths set at one. Rewording the descriptions of queues is of little real benefit.

After more than a decade of steady growth, the number of elective hip procedures is in decline. Deborah Ward and Lillie Wenzel unpack this surprising trend. 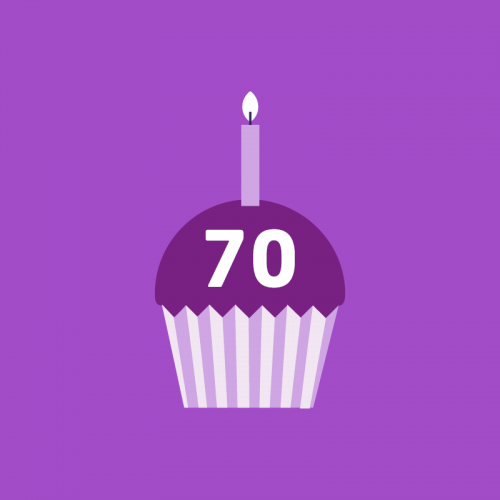 A podcast about big ideas in health and care. Episode four: as the NHS turns 70, what state is it in? What will it look like in another 70 years? Helen McKenna talks about how the NHS is changing with Don Berwick, Ceinwen Giles and Siva Anandaciva.