Words can sometimes take on a whole new meaning in the NHS. A good example is the ‘non-recurrent’ funding that continues to be provided year after year to help the NHS cope with additional pressures over winter. But even if the NHS banks on the reoccurrence of this non-recurrent funding, Figure 1 shows that it is still kept on its toes each year wondering how much funding will be available and when it will be provided.

Figure 1: The pattern of NHS winter funding in recent years

If we go back a few years to 2013/14, a picture starts to emerge of how NHS winter funding typically works. In August 2013, the starting pistol is fired and £250 million of funding is announced to support frontline services over the coming winter. In late September 2013, the details of who will receive the funding are released – with most targeted at those parts of the country at greatest risk. Local providers of hospital and other services dusted off their proposals for how they could use this extra funding and submitted their bids to those who were responsible for holding the funding at a regional level. And – eventually – the extra funding reached the NHS front line.

How is the funding spent?

So, what is the funding then spent on? Well, it’s a mix of services that were already up and running, which can now receive some retroactive financial support, and genuinely new schemes that could not have gone ahead without the additional funding boost. It’s also a mix of schemes that support services in hospital (eg, opening and staffing more hospital wards) and out of hospital (eg, extending the hours primary care is available, spot-purchasing of care beds). Sometimes local areas are given discretion over how to invest the money, and sometimes the annual funding is tied to very specific national priorities – £100 million in 2017/18 was earmarked for introducing new ways of ‘streaming’ A&E patients to different hospital services.

But Figure 2 shows that despite this variation in how the funding operates, fundamentally it is often spent on one thing: more capacity to cope with surging demand over winter.

Figure 2: What is winter funding spent on? 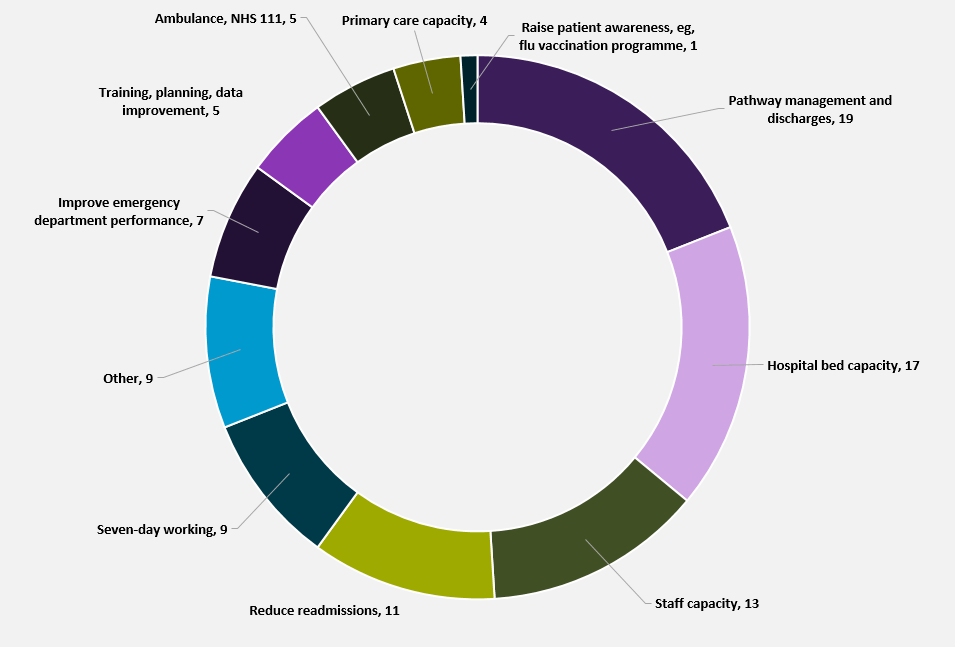 Source: NHS England data for planned spending of £700 million winter funding in 2014/15, data shows the percentage of winter funding allocated to each activity.

But let’s go back to 2013/14 for a moment, because in (very) late November 2013 there is a predictable twist in the tale. As pressures on services begin to mount and A&E performance hits the headlines, a further £150 million (on top of the £250 million already provided that year) of funding is found to help hospitals maintain their A&E services over winter. Cue more rapid dusting-off of plans and urgent conversations about how this money could be used to improve services for patients at short notice. This is the dysfunctional pattern the Health and Social Select Committee has described, where funding is delivered too late in the year to support planned and sustained improvements to patient services.

A change of tack

Perhaps for this reason, in 2015/16 NHS leaders decided to try something new. NHS England announced that the annual budgets of clinical commissioning groups would be increased by £400 million recurrently to provide extra funding for services over winter. The theory was that providing this funding up front each year would allow more time for planning and better value investments in services.

But in solving some problems of the past, this approach introduced a new problem – few people could tell where the money went or what it achieved. Although winter funding had been late in previous years, it had the benefit of strong branding and clarity of purpose as it percolated through the NHS. This transparency and accountability were lost when ‘winter funding’ became just ‘funding’.

Little surprise then that the relentless rise in emergency admissions to hospital (Figure 3) have seen a return to the traditional multiple-bites-at-the-cherry approach to winter funding, culminating in this year’s NHS Planning Guidance in February 2018, which declared ‘There will be no additional winter funding in 2018/19’, only for an announcement seven months later that hospitals would be given an extra £145 million to increase capacity ahead of this winter. A further £240 million of government funding was then found (even later in the year) to pay for social care packages to support the NHS.

What can we learn from this?

So if this is meant to be a short(ish) history of NHS winter funding, what lessons can history teach us? Well, aside from general principles that could apply to any walk of life (eg, early notice is better than late notice), four things stand out.

First, a little generosity is needed towards the national bodies. It is easy enough to take pot-shots at NHS England and NHS Improvement for starting each year saying there is no more winter funding only to have a volte-face later in the year. But sometimes this funding is genuinely not found until the end of the year when forecast spending is firmer; sometimes the decision to find more funding is made by political masters rather than NHS leaders; and it is hard to argue against the case for extra funding for frontline services as winter approaches and performance against high-profile national standards deteriorates. The gravitational pull of A&E departments in winter works as powerfully for funding as for patients and media headlines.

Second, a little more transparency would go a long way. Since 2011/12 more than £3 billion of public funding has been provided at short notice to support NHS services over winter (and that’s before fully accounting for inflation). No doubt this has helped services financially and operationally to some extent, but did the funding work? Was it value for money? It’s hard to say, because it’s often unclear what the money was used for beyond generic ‘improvement’ in services over winter. NHS Improvement now publishes a helpful annual review of winter, but the national bodies should set out in more detail what they hope winter funding will achieve and then inquire whether it achieved the desired effect. A good place to start might be a more detailed assessment of whether the £100 million investment in 2017/18 to roll out primary care streaming has been effectively used to improve services.

Fourth, and most fundamentally, perhaps we finally need to confront the basic illogic of winter funding. One-off blasts of funding may work when you have a time-limited problem that can be solved with money. Neither of those conditions applies to the health and social care system in winter. The challenges in A&E departments and other parts of the service last all year round – winter simply exacerbates them. They are caused by rising demand for services, a lack of staff, a lack of beds, a lack of physical space, a lack of resources in the community – none of which can be remedied in the medium or long term with the amount of winter funding that has been on offer to date.

This then may be the toughest of tough choices for an NHS that is caught between meeting the needs of today while planning for the needs of tomorrow. Winter funding is sometimes referred to as resilience funding, which in many ways is a more helpful term as it is clear that the funding is intended to make the system more resilient and able to maintain performance standards despite year-on-year increases in demand and seasonal surges in activity. That type of resilience is hard to buy with bits and pieces of funding released in fits and starts throughout the year.

As we approach the 2018 Autumn Budget, and a debate over how the funding settlement for the NHS should be used to both sustain and transform health care services, winter funding can be a helpful marker of where the priorities of the health and care system lie. If we are truly moving towards a health and care system based on the principles of integration and population health management, the next time £145 million is found at short notice earmarking it for ‘winter funding’ may no longer seem like the easy or logical thing to do.

Reducing long stays in hospitals: how to prepare properly for winter and learn from past pressures

With the pressures on the NHS making news headlines every winter, it is time to engage in serious preparation work to ensure that hospital corridors will not serve as impromptu wards this winter.
Find out more about this event >

A podcast about big ideas in health and care. Episode two: Does winter ever end for the NHS these days? Helen McKenna talks about winter pressures in A&E with Siva Anandaciva and Matthew Kershaw.
Completed project

We bring together a range of our commentary and analysis to explore the reasons for the extreme pressure on health services this winter.
Blog

NHS winter crisis: when a plan is not a plan

Matthew Kershaw highlights the need for a fundamental change to the way NHS emergency care is provided.
Blog

The NHS 10-year plan: how much will be spent on NHS deficits?

Richard Murray calls for the reform of the NHS’s current Byzantine financial system. 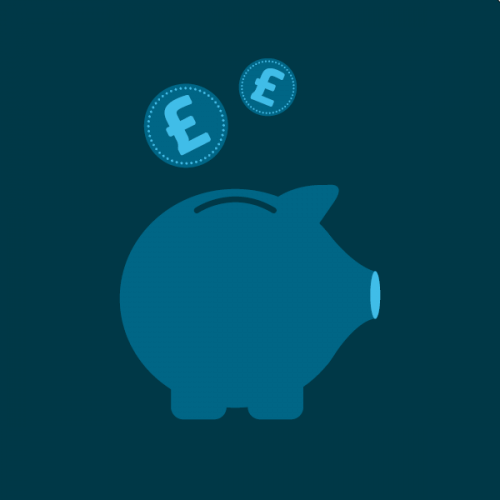 As long as we have sticking plaster approach to NHS funding without proper short, medium and long-term planning we will not sort out the funding problem of NHS. Life is all about getting the basics right. NHS works is silos, there are too many leaders (who are actually managers appointed to leadership positions), culture of bullying is fife, there is 'Them and Us' culture between clinicians and managers in many departments, Poor digitalisation, demand is increasing and elective is very inefficient and social care funding has been reduced and patients are in acute beds because they can not be discharged because of lack of community beds and rota gap is increasing!

So what NHS needs is leadership culture and leaders who can think outside the box and unite everyone for a common purpose, Our purpose is our patients. Leader's job is to transform culture of bullying to kind, caring, compassionate learning and supportive culture and to create great teams so that staff can provide great care.

This is how we transformed Wigan and reduced harm to patients by 90% just in 8 years! NHS does too many unnecessary procedures, wastes lot of money on medicine and culture of bullying costs NHS £2 Billion a year!

Until we get the basics right, we will keep on wasting money. Leadership is all about planning and preventing the crisis or dealing with the crisis quickly by working with everyone.

NHS trims at the edges and goes from one crisis to another.