Several commentators have reported on how improvements in life expectancy in the UK have stalled since 2010, with the most recent analysis showing that long-term mortality improvement has stalled in males and females, and at younger and older ages. Views about the causes of this disturbing trend vary widely. We have previously commented on issues that need to be considered in this debate, including whether or not these trends are unique to the UK. Given that some of this slowing has been caused by higher than the normal excess seen in winter deaths, and that data for the recent 2017–18 winter is now available, it is timely to see whether it brings more of the same.

The European Mortality Monitoring Network (EuroMOMO) monitors real-time mortality data for European countries, with the aim of detecting risks to public health from, eg, outbreaks of infectious disease or extreme weather conditions, as early as possible and informing the public health response. EuroMOMO uses a statistical model to identify when mortality rates move out of the ‘normal’ range.

Figure 1* (from EuroMOMO's latest bulletin) shows pooled, weekly mortality data for 23 European countries from 2014 to week 25 2018, ie, last week. The data for age groups above 15, and for all ages, are adjusted for seasonality, ie, the higher numbers of deaths seen in most winters. There are pronounced spikes in all-age numbers of deaths in the winters of 2014/15, 2016/17 and 2017/18 – these are caused primarily by the spikes in mortality at ages 65+ because most deaths occur at older ages, although excess deaths at ages 15–64 also make a contribution. These spikes are well above the ‘normal’ range expected in winters. Interestingly, the numbers of deaths overall and at older ages don't spike in winter 2015/16 (or in EuroMOMO data for 2013/14 not shown here). 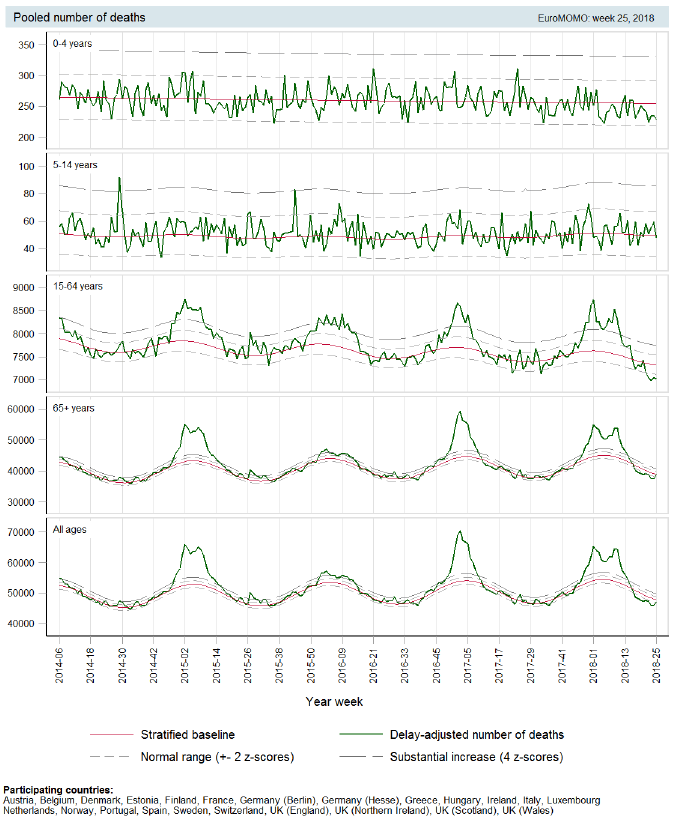 EuroMOMO's additional analyses conclude that both the 2014/15 and the 2016/17 winter excess mortality spikes (in older people and overall)  were driven mainly by flu, and particularly the strain A(H3N2) in widespread circulation throughout Europe – the variant that most commonly causes flu fatalities among older people. EuroMOMO will report in due course on the above normal 2017/18 winter mortality seen across Europe and the role of flu in it. Meanwhile, the EU’s disease prevention and surveillance agency reports that the flu virus circulated at high levels this last winter, and for longer – from December 2017 to end March 2018.

Meanwhile, ONS’s recent report that the mortality rate in England in quarter 1 2018 was 5 per cent higher than in quarter 1 2017, and the highest rate since 2009, has prompted the Department of Health and Social Care to ask Public Health England to conduct a review. This follows several papers postulating that the stalling of improvements in life expectancy since 2011 are associated with ‘austerity’-driven constraints on health and social care spending following the 2008 recession, and calls for an urgent investigation by government.

We agree the reasons why mortality rates have shown little or no improvement since 2010 need detailed scrutiny, given also that life expectancy in the UK is lower than in many comparable European countries, especially among females. While it’s likely that several factors contribute to these trends, including some specific to UK, it does look as though excess winter deaths above the normal range and flu could be part of the story.

Given the commonalities with European countries in terms of the slow-down in mortality improvements during the post-2008 ‘austerity years’, and the timing and causes of winter mortality spikes, such an enquiry needs a broader lens than just UK. The King’s Fund is working with the Health Foundation on research the Foundation has commissioned to examine recent mortality trends in UK, and their likely determinants, in the context also of what’s happening in Europe. We hope to provide some provisional results later this year and a final, rounded assessment by early 2019.

Although we have technically moved out of winter, the latest performance data paints a picture of continuing pressure on NHS staff and services. While A&E departments understandably received much of the focus over the winter months, a quieter decline continues in waiting times for planned (elective) care.

Yes, flu could be part of the problem. Or it could be some other sort of infectious agent that lowers the body's resilience and allows underlying conditions to gain the upper hand, terminally in some cases. Clearly it would have to be endemic as you have a large geographical area yet changes in the countries track each other fairly closely over the same period. What agent(s)? Difficult to say unless you're looking. Sometimes the answer is right under your nose but unless you look in the right place or with the right kit you just cannot see it.

Was building the NHS Nightingale hospitals worth the money?

One year after the NHS Nightingale hospitals first started to receive patients, Siva Anandaciva looks back and considers why these facilities were built, what they did, and what can be learnt from the experience.
Long read