Providing new medicines costs money. Indeed, the introduction of new technologies, including drugs, is one of the main causes of the growth in spending on health care. But at a time when the NHS budget is rising very slowly this creates a tension which has potentially significant implications for patients.

We wanted to understand how much the NHS spends on medicines, how it controls that spending and what the future might hold, and have published a briefing outlining our findings.

How much does the NHS spend on medicines?

According to the most comprehensive snapshot, total NHS spending on medicines in England rose from around £13 billion in 2010/11 to £17.4 billion in 2016/17 (see graph) – average growth of around 5 per cent a year (outstripping growth in the total NHS budget). 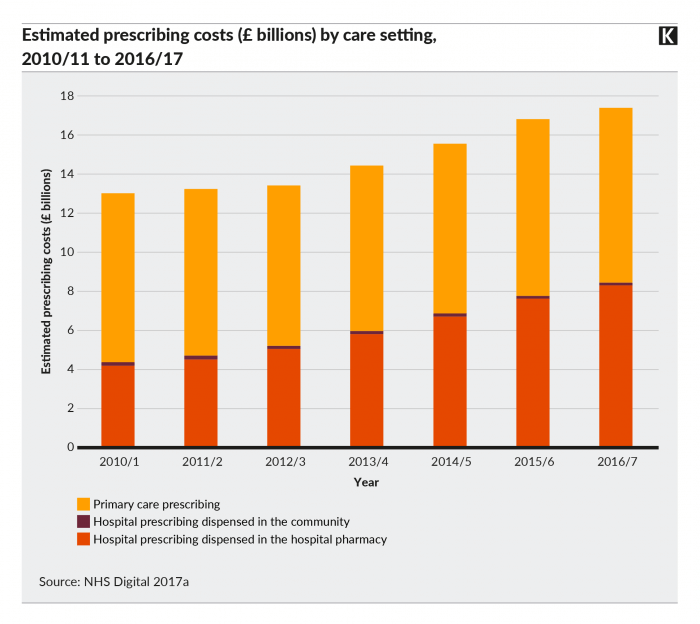 For several reasons, these figures give only a rough guide to what is spent. For one thing, they’re based on prices published by manufacturers, but the NHS regularly agrees (confidential) deals with pharma companies to buy drugs more cheaply. Moreover, some drugs, particularly those provided to patients in their own homes, are not consistently captured in these figures. Income from prescription charges and statutory rebates from manufacturers to the Department of Health and Social Care are not included either.

It’s also not possible to say precisely what’s driving growth in spending because there are gaps in the data. Most of the growth is in hospitals, where contributory factors may include an increase in the number of patients treated and the development of costly new products such as cancer drugs. Despite increasing volumes, cost growth in primary care is much lower as the average cost of prescription items has been falling thanks to the use of cheaper generic drugs.

How does the health service control spending on medicines?

The NHS has used a variety of policies to control spending and promote value for money – these cover the prices the NHS pays, which products it makes available and how prescribers provide them to patients. For example, encouraging the widespread use of generics – which has generated substantial funding headroom – has been achieved through education and scrutiny of prescribers’ decisions.

Yet in the context of increasing funding pressures, policy-makers have recently sought to exert additional control on spending. Some of their measures have been relatively uncontroversial. For instance, the government has taken on powers to intervene in generics prices (although the price of some generics has spiked in recent months). And the policy which controls spending on some branded medicines (the so called statutory scheme) has also been strengthened.

Some other changes have been more contentious. First, after coming under criticism from a number of quarters, the Cancer Drugs Fund has been reformed to limit provision of products NICE thinks aren’t cost effective.

Second, a budget impact test has been introduced for new medicines. Any new product that NICE assesses to be cost effective but would cost more than £20 million in any of its first three years, will (probably) be subject to negotiation between the company and NHS England in the hope of lowering the price. If a deal can’t be reached, NHS England is able to apply to NICE to delay access to the product.

Alongside this, NHS England has issued guidance that low-value medicines (eg, herbal treatments and some painkillers) and products that are widely available over the counter (eg, for minor illnesses such as coughs and colds) shouldn’t be routinely prescribed in primary care. Instead, patients (except those thought to be vulnerable) should be encouraged to purchase their own medications.

What does the future hold?

Medicines policy has long involved reconciling competing objectives – providing patients with good access to effective drugs, ensuring spending on medicines is affordable to the NHS, and incentivising manufacturers to continue developing innovative products. Historically the government and the NHS have sought to balance these – realising all to some extent and none perfectly.

If, however, the government continues to fund the NHS at below the historical trend, policy-makers are likely to face increasingly difficult choices between measures that may undermine manufacturers’ incentives to develop new products or erode patients’ access to medicines. The extent to which this would be tolerable may be a useful question for ministers to consider as they negotiate the detail of the recently announced multi-year funding settlement for the NHS.

The rising cost of medicines to the NHS: what’s the story?

In the face of rising costs, the NHS is grappling with how to provide access to medicines in an affordable way. Our new briefing explores the NHS’s approach to managing its spending on medicines and choices that policy-makers are likely to face in future.
Press release

Thank you for your comment and I'm sorry to hear about your poor experience. Both Dementia UK, and the Alzheimer’s Society have support and advice resources, which you may find useful. You could also contact the Patients Association as they will be able to advise you on what support is available.

I do hope this is helpful.

i watch over a friend with alziemers . he is forgetting what meds he takes and when . iv asked the local chemist 4 times if he could do the card that you just pop them out . he refuses say,s my friend is not funded . is there away i can get them for him it would make things better and less confusing forb my friend .

Personal experience of a more expensive clinical option being denied (pegfilgrastim), compliance not achieved (needle phobic) and an extended inpatient stay resulted. While not an example of your argument directly, it is an example where attempts at pharma cost containment lead to greater cost through lack of system flexibility for individual patient comorbidities. Inefficiencies are everywhere IMHO, as a result of containments beyond the optimum. Cost shifting from pharma containment onto NHS staffing and resources is widely found.

The rising cost of medicines to the NHS: what’s the story?

In the face of rising costs, the NHS is grappling with how to provide access to medicines in an affordable way. Our new briefing explores the NHS’s approach to managing its spending on medicines and choices that policy-makers are likely to face in future.
Press release

Have you ever wondered how new medicines are developed, approved and priced? This explainer outlines the long journey from the discovery of a new drug to when it becomes available on the NHS.