The Workforce Race Equality Standard (WRES) was introduced in 2015 and aims to address the inequality experienced by staff from a black and minority ethnic (BME) background in the NHS, to ensure they have access to career opportunities and receive fair treatment at work. The King’s Fund recently hosted a seminar, in partnership with NHS England, looking at London WRES data with senior leaders.

What is clear from the data is that there has been some progress, but sufficient progress is not being made. One of the panel members noted that, based on current projections, it would be another 30 years before 40 per cent of the leadership positions (ie, band 8a posts and above) at their organisation would be occupied by staff from a BME background.

One of the most important first steps for leaders is to confront the issue directly and openly and we heard from leaders in London about how they were trying to do this. The WRES data offers transparency and enables boards to talk about this issue with an understanding of how they are performing. Discussing this issue at board level and building this into the accountability architecture of boards has been very powerful.

But alongside this, leaders need to have conversations with their BME staff about what it’s really like to work in their organisations and outline concrete actions to address discrimination. The panel talked frankly about how important it was to do this and how dramatically it shifted their understanding of the issue. To hear people’s stories and to understand discriminatory experiences that they had never had to confront themselves, despite being in the same organisation, was huge.

All admitted these experiences were difficult to hear and to understand. They had heard first-hand how many of their staff members had suffered in ‘dignified silence’. And this listening was not a one-off act. It was done on a regular basis with a constant reinforcement of the importance of the issue and determination that it would be worked on every day to ensure improvement is seen, heard and felt among the workforce. And importantly that improvement is evidenced by the data.

As well as listening to staff, boards should be questioning themselves regularly about the culture of their organisation and how inclusion is demonstrated within that organisation. We heard from trusts where equality improvement had been placed at the heart of organisational and individual leader objectives in an attempt to foster focus and increase accountability. And we know accountability is vital in changing behaviours.

The WRES data offers transparency and enables boards to talk about this issue with an understanding of how they are performing.

Further suggestions for tackling this issue included focused support and coaching for ‘middle management’ – we know from our previous work that opportunities to bring about change are most likely to be effective at team level, as this is where most discrimination occurs.

Other practical suggestions included ensuring all interview panels, boards and committees reflect the diversity of the organisation and applying some of the evidence around approaching disciplinary processes differently. One organisation is about to implement a potentially powerful approach: when a BME candidate has been shortlisted for a senior role but not offered the role, the chair of the interview panel is required to write to the chair of the trust to explain (giving clear reasons) why the role was not offered to the BME candidate. It is hoped that this level of accountability and transparency will have an impact on behaviours and decision-making.

However, the real driver for improvement on race equality is demonstrable, positive, committed and high-quality leadership. A critical part of leadership is making people feel they belong. Leaders need to listen to understand the issue and talk openly about how they will address it; they must set expectations; they must measure and monitor; they must give people the tools to respond to the challenge; and they must ensure that there are real consequences for failure to improve.

A mixed bag of results from the NHS Staff Survey

Vijaya Nath reflects on the issues raised in a recent round-table event on how the NHS can better enable black and minority ethnic staff to achieve their potential as leaders.
Commissioned report

I have applied and have been shortlisted for at least 20 Band 8c posts.Not one offered me a job despite my length of experience as a healthcare leader, my skills, my excellent track records of service improvement projects, my national awards and my qualifications including a UK Masters Degree and a National Leadership Academy course for BME Leaders in health and social care.Not to mention my memberships with national bodies and despite being coached by DONs, etc.So what is the reason why???

By the way, just to be clear none of the employers I applied for is my current employer Hampshire Hospitals NHS Foundation Trust.

I do not know you or your particular circumstances. In general terms I was surprised to learn on a course recently that to get a promotion the image / profile people have you is about 60 % plus important and only about 10% on what you have done to date.

Plus having a mentor that will put in a word for you for temp roles of promotion and arranging secondments into roles that you would like to do is another way forward.

You need to create a network with the people that will be employing the people that you want to go to. Having a supportive manager that will let you have some personal development time to develop these networks, also helps.

I find a class action lawsuit against the NHS for millions?, 100's of millions? a potentiality perhaps..

As I understand things, every country on earth has a hospital or more run by its citizens, thus implying every role in the nhs is capable of being performed by bme staff, so why after sixty or seventy years of the nhs have there been no significant percentage of bme managers and CEO's?

On a more personal note: I have always been treated over many, many years as a patient really fantastically well by every single member of the nhs staff I have ever had the good fortune to have come in contact with, so what does that suggest? 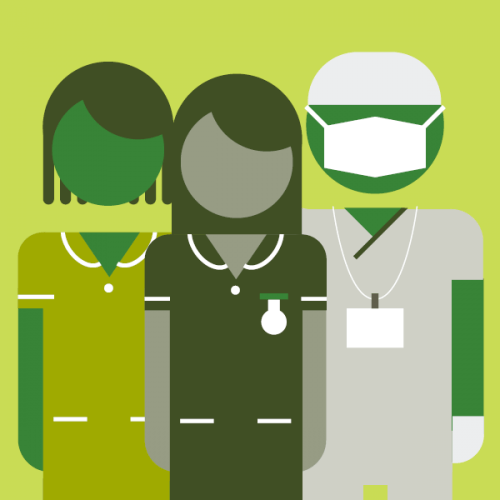 Professor Dame Elizabeth Anionwu sits down with host Helen McKenna to talk about what drew her to nursing, becoming the first Sickle Cell and Thalassaemia nurse specialist in the UK, and how to remain positive in the face of adversity.
Blog

While the NHS is making progress on closing some race inequality gaps, there is room for improvement. Habib Naqvi discusses opportunities to support work around the Workforce Race Equality Standard.
Blog

A hopeful moment? Addressing race inequalities in the NHS workforce

The historical issues of institutional racism in the NHS have been brought sharply into focus by the Covid-19 pandemic and the recharged Black Lives Matter movement. Shilpa Ross outlines findings from our research into inequalities in the NHS and calls for action and allyship from white colleagues.