Former Chancellor of the Exchequer Nigel Lawson famously asserted that ‘the NHS is the closest thing the English people have to a religion’. Perhaps ironically, data from Ipsos MORI shows us that since 1983 the formal leaders of religion (the clergy) have seen the sharpest drop in trust of any profession (meanwhile doctors have been top of this trust league for decades, only pipped at the post for the past two years by nurses, a profession only recently added to the survey choices).

Every year since 1983 the British Social Attitudes (BSA) survey, carried out by NatCen Social research, has also been asking the public about its views on the NHS and other public services. How has Britain’s unofficial religion fared over this time and what does this tell us about the future? Our new briefing presents the key findings and I am going to add a set of messages here.

First, while the BSA survey does not ask the public a comprehensive set of questions testing their loyalty to the core principles of the NHS, there are some that test some aspects of this and these show a remarkable enduring faith in these principles. Hence, asked whether health care definitely or probably should be a government responsibility, a whopping 98 per cent agreed it should be in 1985 and 96 per cent still did so in 2016. Similarly asked whether the NHS should only be available to those on lower incomes (ie, means-tested), the ’no’ vote has been very stable and the latest available results, from 2015, were no exception at more than 70 per cent1. These results seem unmoved by the booms and busts in NHS funding; the political colour of the government of the day or indeed by the wider changes in society.

Does this faith in the principles of the NHS mean the public is blind to its strengths and weaknesses?

Second, does this faith in the principles of the NHS mean the public is blind to its strengths and weaknesses? Absolutely not – the NHS has been through extended periods (including much of the 1980s and 1990s) when net public satisfaction with services was negative. After 2001, this began to change with the percentage expressing satisfaction rising from 38 per cent to 70 per cent in 2010, mirrored (largely) by a fall in those not satisfied. At least on the surface, the explanation looks straightforward: negative opinions about NHS performance in the 1990s occurred when waiting times for surgery were measured in months and years and the winter crisis that is so shocking to us in 2018 was a routine annual occurrence. The public remained loyal to the concept of the NHS (and its staff) while being profoundly unhappy with the actuality of the service.

In 2000, facing criticism for a struggling NHS, Tony Blair committed to match EU levels of funding for health care, and as sustained real-terms growth in spending began to increase staff numbers and cut waiting times (among other things), as the BSA results show, the public did notice. However, this positive shift in opinion did not start when politicians announced things would improve (politicians often announce improvements to come) but when the service actually began to improve. Since 2010, though satisfaction has fallen it still remains very high by historical standards.

This may feel surprising to those working in the service, as they have worked harder and harder to maintain standards. While this hard work has increased the pressure on NHS staff (leading to increasing numbers wanting to leave the NHS), it also means that the declines in performance have been, until recently, relatively minor by historical standards. As the winter crisis bites, this is becoming less true at least in A&E.

Third, is the NHS unusual when we look across attitudes to wider public services, taxes and benefits over the past three decades? The answer here is more mixed. While the NHS has consistently been the public’s top priority for government spending, the public did appear to notice the big increase in spending in the early part of the 2000s as the percentage supporting more government spending on health dropped from 90 per cent in 1996 to 78 per cent in 2006 (admittedly still high). Unsurprisingly support for increasing spending on health care has risen again since then. More striking though are the shifts in public opinion about other services and benefits. For example, the Resolution Foundation, among others, has expressed rising concerns about intergenerational fairness as younger generations have lost out financially compared to the old. Since 2006 (just before the global financial crisis kicked off the current economic malaise that has contributed to these trends), net support for more government spending on benefits for the retired has dropped by more than 25 per cent (the equivalent of a quarter of the population changing their minds). This changing attitude is something the government will need to consider as it develops its policy proposals for social care funding (much of which is spent on older people) in the forthcoming Green Paper.

Looking to the future, these are my top three take-aways from this data.

Those that fear a shift toward a more US-style system based on private spending should take some comfort from these results as they suggest this would be deeply unpopular with the public. 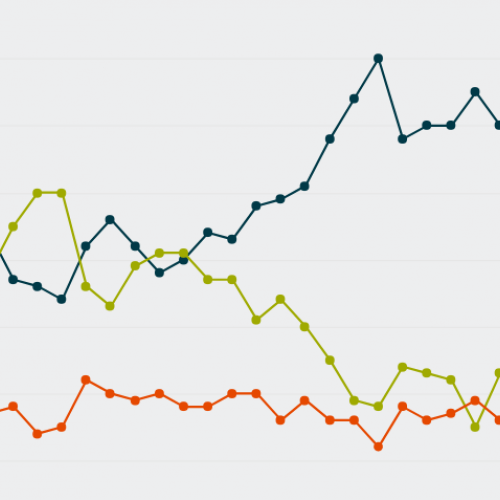 How have public attitudes to the NHS changed over the past three decades?

What can data from 34 years of the British Social Attitudes survey tell us about the public's relationship with the NHS and how it is viewed alongside other publicly funded services? We reflect on the top four issues.
Report

What does the public think about the NHS?

As part of our project on the changing relationship between the NHS and the public, the Fund commissioned some initial polling from Ipsos MORI. The results are in.
Completed project

The public and the NHS

The relationship between the NHS and the public is complex. Although surveys show us that people are proud of the NHS and most are satisfied with the services they receive, it’s sometimes said that public expectations of the NHS are rising. Against this background we have been undertaking work to explore the relationship between the public and our national health service.
Blog

The compact between the public and the NHS

Chris Ham explores how the public's expectations of and obligations towards the NHS have changed over time.
Blog

Great expectations: the changing nature of the public’s relationship with the NHS

What are the biggest issues and priorities for the NHS, and what do people expect from our health care system in the 21st century? As we start a new research project, Beth Adams reflects on the insights we’ve had so far.
Topic

Public opinion: Our work on the public's opinion on NHS and social care issues

Hesitancy about the Covid-19 vaccine is ‘disproportionately high’ among Black, Asian and minority ethnic groups

Dan Wellings, Senior Fellow at The King’s Fund, responds to polling commissioned by the Royal Society for Public Health (RSPH) which shows that BAME groups are less likely to want the Covid-19 vaccine.
Blog

How will the Covid-19 vaccination programme achieve the uptake it hopes for? Dan Wellings says understanding and involving local communities, their needs and concerns has to be part of the answer.
Blog

What should a new government strategy on obesity look like? David Buck outlines what is needed to ensure this attempt is successful.