On health the November budget, as ever, was dominated by the numbers on NHS funding and whether the chancellor would find up to £4 billion more to maintain the standard of services. In the end he did find more, though not as much as is needed. There was no mention of social care funding or public health funding. However, as in every budget, there were policy changes that will impact on health including on housing and homelessness, and changes in excise taxes on tobacco and alcohol.

The fact there was no mention of public health funding means the government remains committed to its decision to cut the grant it gives to local government for public health. A week before the budget, the Department of Communities and Local Government released the latest data on how local government has responded to past cuts, which updates data on actual outturn spending to 2016/17. Here we analyse what this, and wider changes in local government spending, tells us about spending in areas that are likely to affect the public’s health over time.

Figure 1 shows how much local authorities spent on public health from the introduction of the grant in 2013/14 to 2016/7 (outturn data) and also the planned expenditure for 2017/18. In 2015/16 local authorities took on responsibility for 0–5 years children’s services so the figures for that and subsequent years are shown in terms of actual spending and also like-for-like spending (excluding spending on 0–5 years children’s services). On the like-for-like figures, spending is the same as it was in 2013/14; based on GDP deflator this amount is likely to be worth 4–5 per cent less and furthermore needs to cover a population about 3 per cent larger (based on ONS forecasts).

Figure 2 shows the percentage change in major categories of spending between 2015/16 and 2016/17 (outturn figures). Two new (small) categories of spend – public mental health and health at work – were introduced in 2016/17 so are not included in the comparison. The large percentage change in spending on prescribed children’s 0–5 services and smaller change in non-prescribed 0–5 services is because responsibility for those services transferred midway through 2015/16 and the comparison is between a full year’s spend in 2016/17 and a half-year spend the year before. In fact, the ‘growth’ in the mandated spend is only 94% rather than 100% as would have been expected if local authorities spent at the same rate over the 12 months of 2016-17 as they did over the six months of 2015-16. The non-mandated spend growth is much lower, signalling a big relative disinvestment in non-mandatory spending on children’s 0-5 health.

Beyond this there was an increase in spending on other aspects of children’s public health (apart from the national child measurement programme which fell) and falls in most other categories, the biggest being in smoking and sexual health services, a pattern that looks set to continue in future. The overall growth in spend of around 10 per cent is due to the full-year effect of the transfer of children’s service; if children’s services were excluded, total spend was around £70 million (2.7 per cent) less in 2016/17 than in 2015/16. 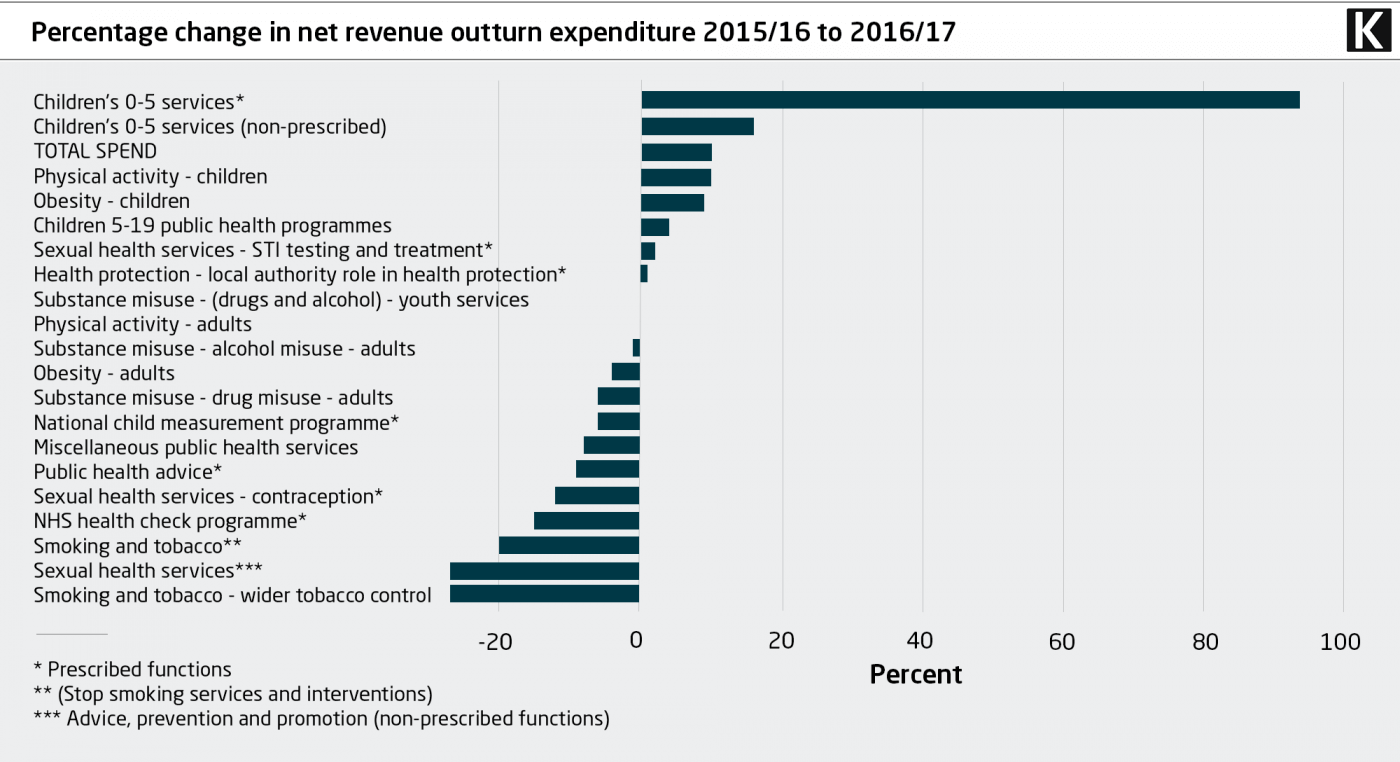 Figure 3 shows changes in spending in a selection of other important categories outside the public health grant from 2013/14 to 2016/17. Overall expenditure across these services has fallen about 2 per cent over this time, from £92.1 billion in 2013/14 to £90.4 billion in 2016/17; again inflation and population change means the real value is even lower. The services that have done best appear to include public health (though this is misleading because of the transfer of children’s services), children’s social care – a 20 per cent increase – and to a much lesser degree adult social care, which we know is not keeping up with need. Most of the rest of these services have seen cuts in spending, particularly housing, cultural services, transport and planning and development – all services important to our health. 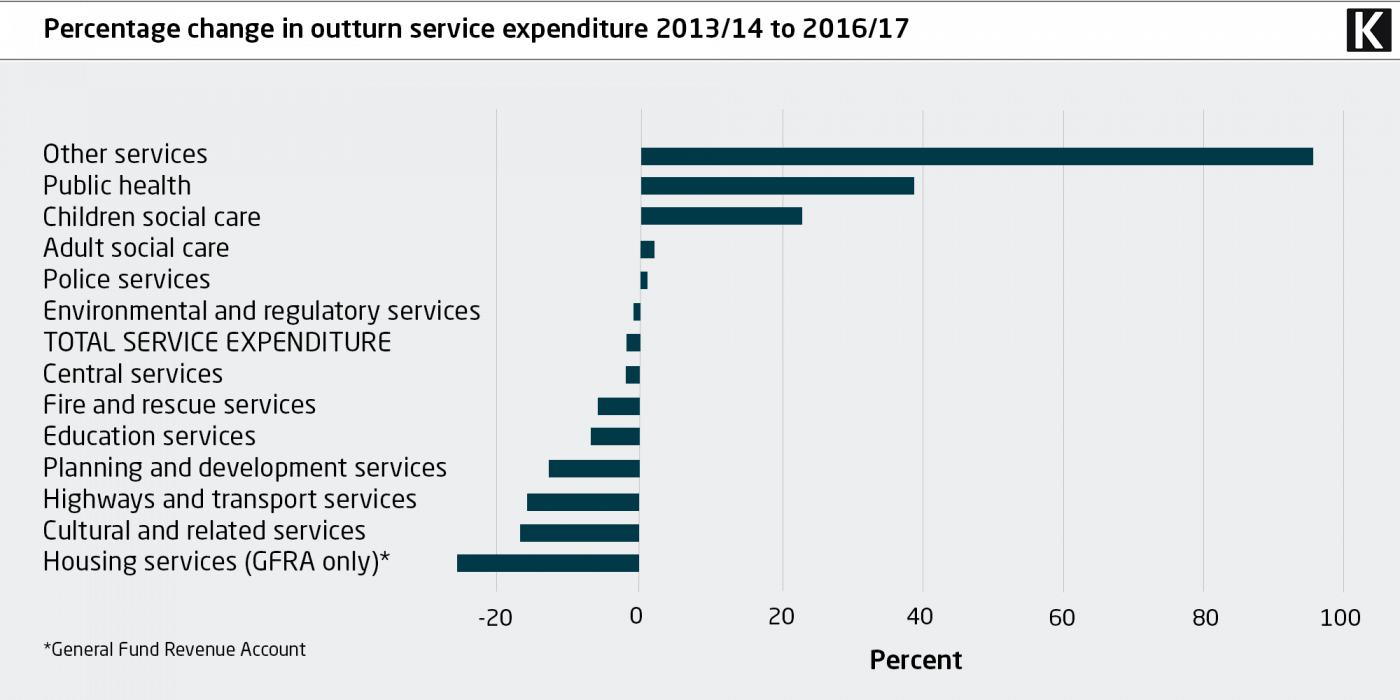 In conclusion, the latest outturn data shows that local authorities are clearly struggling to maintain spending in the face of central government cuts.

In an unwelcome Christmas gift, the government announced that these cuts will continue into 2018/19 and beyond, falling by 2.6 per cent in both that year and in 2019/20. This has drawn a stinging rebuke from the Local Government Association.

Although the focus tends, understandably, to be on how these cuts affect direct spending on public health (that subject to the grant), other areas of spend have also suffered since the government’s public health reforms were introduced in 2013/14. Despite some specific changes in this and previous budgets (such as the sugar levy), when it comes to funding services that impact on the public’s health, central government’s actions show that it is not affording public health the same priority as the NHS. The results can be seen in the spending figures; too many local government services that affect the public’s health are facing death by a thousand cuts.

Thanks for your question. As far as i am aware the data is not collected or cut in the way that would make this easily do-able. Public mental health spending data is starting to be collected from local authoritities but this is not cut by age, and some of the schools budget is proably spent on prevention too e.g. youung persons' 'wellbeing'. Similar issues arise in physical health, though some of these local authority budgets are broken down into children's services. But again a lot sits outside local authorities themselves in the NHS and beyond.

Thank you for your excellent article. With reference to the NHS consideration that investment in prevention is "a key focus to help reduce the long-term cost of treatment and to maintain a sustainable health service" would you have ideas on possible measurement?

In the move towards parity how best to compare expenditure figures for prevention up to age 18 for Mental Health compared with those on Physical Health?

Veena Raleigh examines trends in life expectancy at birth up to 2020 and the impact of Covid-19 in 2020, gender differences, inequalities, causes of the changing trends since 2011, and how the UK’s life expectancy compares with other countries.
Long read

As the health and care system heads into a time of far-reaching reforms, David Buck and Richard Murray look at the opportunities and challenges ahead for how the new public health system and ICS will relate and work together in the future.
Blog