We are in the middle of winter, and pressures on the NHS are rising. The media and groups of NHS staff are describing an A&E service in crisis, while the government says the NHS is more prepared for winter than ever before. What does the latest national data say about how A&E departments are coping compared with previous winters?

Walk into an A&E department this month and you will see a service under tremendous pressure. Departments built to see a maximum of 350 patients a day are seeing 500 or 700. Staff are tired and overworked, and patients are waiting on trolleys in A&E when they should be in a hospital bed or at home.

Although pressures last all year round in A&E, winter brings some gamechangers that can lead to sudden surges in demand or reduce the NHS’s ability to meet this demand. These include influenza-like illness, respiratory diseases associated with colder weather, and infectious winter vomiting bugs like norovirus that can close entire hospital wards. These affect NHS staff as well as the general population, of course, further adding to pressures on services as staff sickness increases over winter.

So far, the NHS has been relatively lucky when it comes to these challenging conditions, but things may now be heading in the wrong direction. Winter 2016 is now a distant memory, but it brought the UK its eighth warmest December since 1910, with mean outdoor temperatures of 5.9 °C compared to the 4.1 °C seen in December 2017. And we know that even moderate sustained temperatures of 4 to 8°C can have a negative impact on people’s health and translate into further pressures on services. Outbreaks of norovirus in hospital this winter are either lower than or in line with previous years, but rates of influenza continue to increase and are now generally above seasonally expected levels. While we remain far below the levels of the last major flu season in the winter of 2010 (Figure 1), emergency department attendances with influenza-like illnesses indicators are increasing and placing further pressures on services. 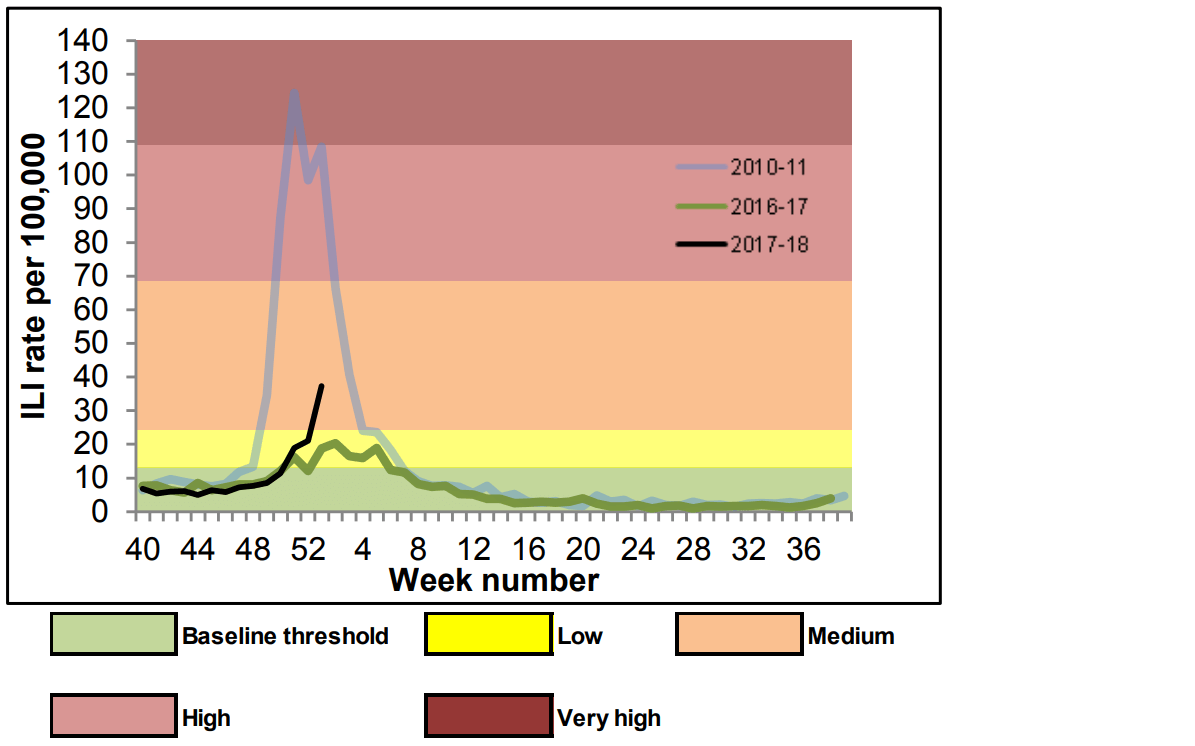 No surprise then that pressure continues to relentlessly rise at A&E departments. The latest data for December 2017 shows that A&E attendances were 3.7 per cent higher than in December 2016, and emergency admissions to hospital 4.5 per cent higher. Freeing up hospital beds for new patients arriving through A&E departments was a key national priority heading into this winter, and led to new targets to reduce delays in discharging patients. While delayed discharges have been reduced, this was not enough to free up the capacity the NHS needed. This has made it more difficult for hospitals to admit patients to a hospital bed from A&E quickly.

The former Minister of State at the Department of Health was accurate when he said this week ‘at Christmas eve, the bed occupancy rate was 84.2%, below the target of 85% that we set going into this particular winter period.’ The Secretary of State for Health and Social Care also cited this target recently as evidence of the preparations the government had made for this winter. However, Christmas Eve was the only day when the NHS met this target (Figure 2) and is a bright spot in an otherwise gloomy picture that reflects the struggles the NHS is experiencing.

Source: NHS England winter situation reports
Notes: Red cells indicate days when more than 85 per cent of beds were occupied. Situation report data is only minimally validated but is considered and may contain data errors, but the data is considered ‘fit for purpose’.

This winter cocktail of increasing demand and hospitals and staff working at full capacity means that waiting times in A&E departments continue to take a battering. Figure 3 shows that the proportion of patients seen within four hours has dropped steadily since 2012, particularly in the past two years, where the early winter months show both poorer and more variable performance than in previous years. This winter the median or ‘average’ department is seeing 83 per cent of patients within four hours in A&E – comparable to the poorest performing departments in 2012/13. The poorest performing departments now see just 58 per cent of patients within four hours over the winter quarter (or a new low of 40 per cent when looking at December 2017 alone).

Figure 3. Proportion of patients seen within four hours in major (type 1) A&E departments in the winter quarter (Oct to Dec) each year, by provider

Source: King’s Fund analysis of NHS England data
Notes: The boxplots above show the range in waiting time performance between major A&E departments. More information on how to interpret boxplots.

To address the rising pressures on A&E, NHS leaders took a different approach this winter compared to the previous two years. A single ‘winter czar’ was appointed to co-ordinate planning across NHS England and NHS Improvement and provide a more coherent winter plan for the NHS. Routine operations have been cancelled en masse relatively early in the winter period, rather than on a reactive and ad hoc basis (the impact of this decision will be felt later in 2018 as waiting lists are already at near-record levels). Routine care quality inspections and plans to eliminate mixed-sex wards have been paused to give hospitals more breathing room. And £335 million of short-term emergency funding has been allocated – albeit incredibly late in the year – to support services over winter, breaking the trend of recent years.

Despite all this, A&E departments continue to struggle under rising pressures and patients continue to wait longer to receive the urgent care they need. Stepping back, it feels like urgent and emergency care policy over the past 10 years has been high on tactics and low on strategy. These tactics also seem to have been predicated on the belief that A&E services are fundamentally resilient through most of the year and only need a little extra funding, staff and escalation hospital beds over winter to cope with short-term surges in demand. The reality may be that it is the cumulative staffing and funding pressures in the NHS over the past decade that must be addressed first, if A&E departments are to be given a fighting chance of maintaining performance over winter and throughout the year.

Black alerts: for emergencies only?

Matthew Kershaw considers whether the frequency of black alerts this winter is putting staff and patients under unsustainable pressure.
Completed project

We bring together a range of our commentary and analysis to explore the reasons for the extreme pressure on health services this winter.

You çannot avoid the conclusion that There Is not enough capa.city .and slack in the system to Copé with normal volatility of demand.
This Is a planning problèm and the responsibity liés at the top

I live in an area where my local Foundation Trust hospital is reported to have one of the lowest performances against the A&E targets and has dangerously high bed occupancy levels. I have no doubt that the front line staff are trying to provide as safe a service as possible but as I am closer to 75 than 65 I am extremely worried what might happen to me if I am seriously ill enough to have to attend my A&E department.

Completely agree, the Grand Canyon sized gap in out of hours provision shows very clearly at these times and the loss of 'urgent care alternatives' and inadequacy of response time and indeed response quality from NHS 111 in recent years is undoubtedly a factor in AED pressures.

Watched an episode of Hospital yesterday where the lack of acute mental health beds and the onward impact on AEDs was painfully played out.

I wonder, is that to do with the configuration of services between the two main sites of that Trust? It's interesting when you think about the demographics of the two areas concerned, you might expect Hastings to be worse affected and therefore more cancellations? More to that than meets the eye I think.

Yes it might help but is that really a solution that maintains the kind of quality and excellence of care - which does include being diagnosed and treated in a timely manner - we want? If crisis management tactics become strategies.. beware.

Yes, for some areas , elective surgery being undertaken in non flu periods is a good plan. Not so good for the holiday seaside areas where the hospitals are choc a block with traffic accident patients and people suffering sunburn or sea rescue need for medical care.

Visiting elderly friend Sunday in Eastbourne DGH, situation entirely under control, mid afternoon, friend seen for exac COPD, treated and for return to Nursing Home. Had not seen GP. At meeting last Friday of Voluntary org. we were reassured the situation in Hastings, same group as above, was under control, hardly any cancellations of routine admissions. Clearly situation varies, lessons to be learnt.

It would be interesting to see statistics showing the average waiting times throughout each 24 hours of Emergency Departments (EDs), as I suspect these would reveal a sharp increase when GP surgeries are closed, as out of hours doctors are usually hard to see quickly. This points to the need for Minor Injuries units in local Community Hospitals being open 24/7 and able to deal with minor symptoms such as flu in otherwise healthy patients, and thus reduce the pressure on EDs.

Occupancy in our acute mental health beds never reach the levels in this article we are consistently above 100% all year round but we never hear anything of these pressures.

We bring together a range of our commentary and analysis to explore the reasons for the extreme pressure on health services this winter.
Report

Covid-19 has dramatically altered how NHS services and finances operate. Our 29th QMR looks at where the NHS expected to be at the end of 2019/20, where it actually finds itself in 2020/21, and what impact Covid-19 might have in the future.
Blog

'For the first time the winter crisis in A&E has merged straight into a summer crisis.' Richard Murray, Chief Executive at The King’s Fund responds to today’s NHS combined performance summary.