There’s no shortage of hyperbole in debates around devolution and the role of cities. There have been predictions that city mayors will soon rule the world and will fix global warming while they are at it.  Some commentators have heralded an era of new localism in which our metropolitan leaders work together to solve the world’s thorniest challenges. So it’s in keeping with this spirit of excitability that the latest plans for health and care devolution in London have been called ‘historic’ and ‘ground-breaking’.

London’s devolution announcement marks the culmination of several years of effort and some complex negotiations. There is now agreement – in some cases ‘in-principle’ agreement – that some control over health and care will be delegated to the capital. The intention is to give the Mayor, local authorities and London health leaders more control over key decisions. But will devolution deliver on this?

The first point to make is that what is happening in London is very different from what is happening in Greater Manchester. ‘Devolution’ has always been an unsatisfactory word to describe developments in the northern powerhouse, which combine elements of delegation (from national government to Greater Manchester) with elements of centralisation (from local authorities to Greater Manchester). In London there is little appetite for the latter – there is a delicate balance of power between the boroughs and the Mayor – and the devolution agreement is at pains to stress that the principle of subsidiarity still reigns supreme.

Estates is arguably the area where most progress has been made. National bodies have agreed in principle that money raised through land and property sales in London will be kept within the city, with the London Estates Board identifying re-investment opportunities to support city-wide priorities. There is also agreement (again, in principle) that the Board will take on new powers regarding business case approvals and allocation of capital funds. The aim is to create greater incentives for NHS organisations in London to sell surplus land, freeing up space for housing development and generating revenue for much-needed investment in primary and community care facilities.

The agreement also aims to make it easier for the London health and care system to function in a more joined-up way, including through aligning regulatory processes and piloting a place-based framework for system regulation. The new London Workforce Board could facilitate integrated working, potentially acting as a locus for pooled funding from Health Education England, Skills for Care and others. Finally, the agreement to delegate responsibility for transformation funding to the London Health and Care Strategic Partnership Board from April 2018 could help finance the development of new models of care outside hospital – a core component of sustainability and transformation plans.

There are, however, some missed opportunities, particularly in relation to prevention and public health, where there are fewer firm commitments. While there is the prospect of collaborative, city-wide action on some issues ‘where this is the most effective scale’, London will not be able to decide for itself how best to use the proceeds of the sugar tax (to be introduced next April), and there are no new powers to tackle the city’s obesity epidemic beyond a commitment to ‘explore options’ for further restrictions on advertising unhealthy food and drinks.

Also absent is any detail about how the planned devolution of business rates will work in London. This will have important implications for public health funding, and London-wide bodies could have a role in smoothing inequalities arising as some boroughs raise more revenue from local businesses than others.

So how far might all this go to fixing London’s well-documented eccentricities? The health and care system in the capital is uniquely complex. Greater clarity over how decisions are made, and by whom, is desperately needed, as are mechanisms to support closer collaboration between boroughs so that innovation can be scaled-up and spread across the city.

The devolution agreement does not make the London system any less complex, but the new strategic partnership board and the other structures sitting beneath it do at least create platforms that could support effective decision-making and partnership-working across the city – and devolved powers stand to give these boards more clout over time. The success or failure of the strategic partnership board will be of interest well beyond the capital, and may shed light on forms of regional accountability and decision-making that could be helpful in other areas.

What the agreement does not do is alter the fundamental balance (or imbalance) of power between the city and national government – the UK remains one of the most centralised political systems in the western world. The London Finance Commission argued that meaningful devolution will require London to have much greater control over its own revenue streams through fiscal reform. With the exception of business rates, that seems some way off.

Governing for health in global cities: lessons for, and from, London

This project aims to support leaders in London and elsewhere to develop successful approaches for population health improvement in complex urban environments.
Blog

David Buck looks at the complex issue of whether local public health services should be funded through business rates, and proposes a set of conditions that need to be met before this option is pursued. 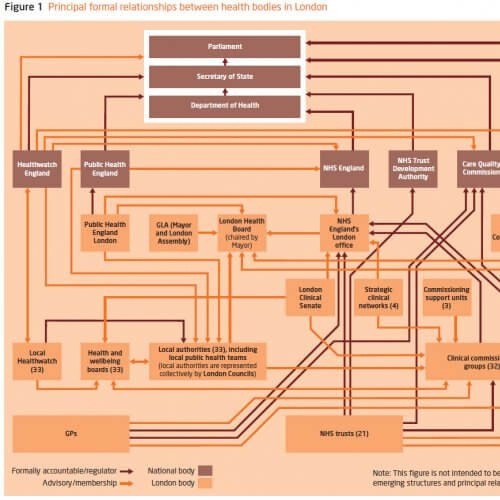 Leading health care in London: how will the new NHS and public health system work?

The new NHS and public health system in London is still taking shape, but the complexity of the emerging eco-system is apparent and can be seen in this diagram from our report on Leading health care in London.

Improving the nation’s health: striking the right balance between national and local

Sally Warren reflects on the findings of the Health Devolution Commission, which considered the role of ‘health in all policies’ and the balance between local and national action.
Blog 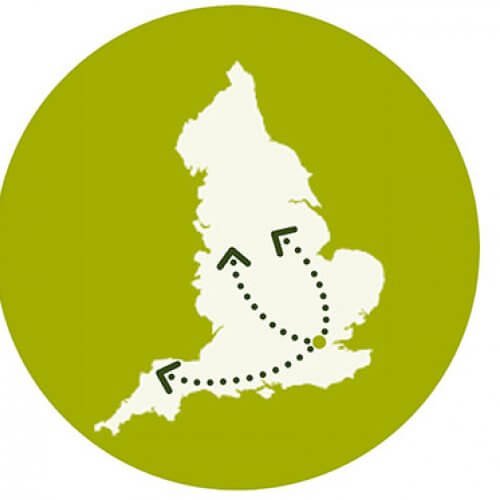 An overview of the key milestones in the recent history of devolution in relation to health and social care.