The current government has now produced two plans and a strategy in important areas of public health and behaviour. So it’s a good time to take stock of what the tobacco control plan, the childhood obesity plan and the drug strategy together tell us about the government’s approach to these issues.

The first thing to notice is rather prosaic – namely, just how short these documents are. While the length of government documents is a poor guide to quality, the obesity plan was an astonishingly brief 13 pages after its filleting by Number 10 advisers just before it went to press. The tobacco control plan comes in at 32 pages and the drug strategy at 48 – hardly meaty by historical standards, but they are more substantial documents.

The second thing that struck me was how much the childhood obesity plan relied on voluntary approaches and engagement with industry. For example, as the first anniversary of the plan came round, it was (re)announced that Public Health England would be introducing voluntary guidelines for producers on calorie content such as ready meals, pizzas, burgers and savoury snacks. We’ve been here before; the government-funded evaluation of the food pledges in the voluntary public health responsibility deal suggested that industry dragged its feet. But industry can clearly move fast when it wants to; its swift reformulation of sugary drinks in response to the non-voluntary sugar levy has surprised many, including the treasury.

There is also a clear focus on local solutions in addressing issues across the plans and the strategy. For example, the tobacco plan has more than 50 mentions of ‘local’, more than twice as many mentions as ‘national’. Furthermore, there is a mismatch in alignment between this focus and the resources available locally to respond. Most of these resources have to come from local authority public health budgets – which have fallen this year – which also has an impact on their spending on obesity and on drug prevention and treatment (see chart). 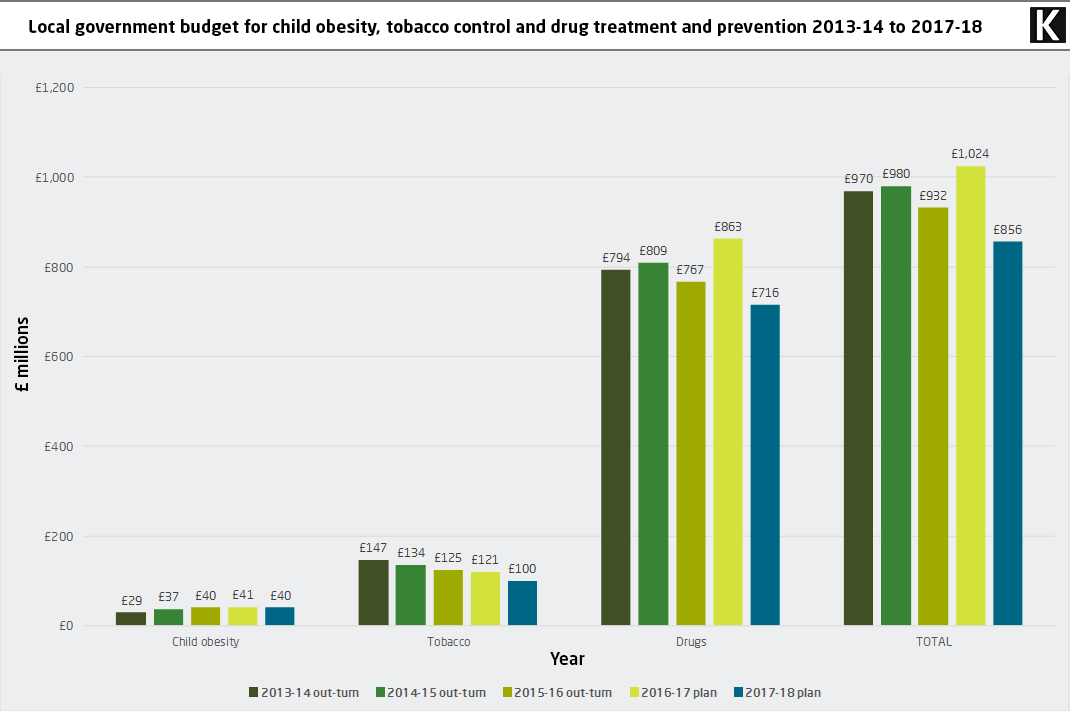 There was an increase in the overall planned budget for these three services, particularly on drugs, in 2016/17, but, as we have previously suggested, this may be due to the fact that responsibility for funding some drug treatments moved from the NHS to local authorities. But the simple fact remains, that local government is planning to spend more than £100 million less on childhood obesity, tobacco and drugs in 2017/18 than it did in 2013/14 – when central government is asking ever more of it. There is therefore a jarring inconsistency between the government’s reliance on local solutions, including fulfilling all NICE guidance, and the resources made available locally.

So, if the resources are not being sent to, or spent in, local areas to support these plans and strategy, are they being spent at the centre? Again, a simple answer, no. None of these documents include any significant spending commitments, with the exception of the commitment to spend the revenue from the sugar levy (estimated initially to be £520 million) on school sports and physical activity. But even this commitment seems to have now been diluted, with concerns that this money will be diverted to plug the gap in schools funding more generally.

If available resources are falling locally, there’s very little from the centre, and no really big new legislative or regulatory changes (with the exception of the sugar levy), then all we rely on to deliver these strategies are better data, ‘support’ and exhortation. As Jim McManus has pointed out, the word ‘support’ occurs 150 times in the drugs strategy. All helpful, but surely the challenges that all three documents set out as their motivating purposes need something more concrete?

Another reflection is the varied focus on inequalities in health. The problem of inequalities (in the sense of clear differences in the prevalence and experience of these problems between different groups in society) is not explicit in the obesity plan and the drug strategy, and although the tobacco plan states that ‘Smoking accounts for approximately half the difference in life expectancy between the richest and poorest in society’ it sets no specific measurable goals on this, in contrast to other areas such as youth smoking. It relies mostly on ‘support to’ local councils, pushing for implementation of NICE guidance, plus more effort on the role of the NHS through the Making Every Contact Count policy. Given the scale of the problem, and the Department of Health’s stated belief that smoking reduction is important in narrowing health inequalities, this is not enough.

To conclude, these three documents demonstrate this government’s reliance on local solutions to some of the country’s most important health problems, but an unwillingness to resource those solutions; they also reveal differences in balance and approaches to policy and practice.

The last thing to point out is that these plans and strategy are not a complete set. The last strategy on alcohol was in 2012; no new strategy has been announced. And while we can criticise the childhood obesity plan, at least there is one; there is no equivalent for the 7 in 10 men and 6 in 10 women who are overweight or obese. And as we know that health behaviours cluster so strongly in certain groups in the population, why is there no cross-cutting inequalities strategy? Perhaps these absences tell us more about government’s approach than anything else.

Reducing inequalities in health: towards a brave old world?

David Buck looks at what recent research and data can tell us about progress on tackling health inequalities, and argues that when planning for the future we should look to the past.
Blog

Did the government meet its pledge to tackle childhood obesity?

Ahead of the general election, we explore whether the government met its pledge to tackle childhood obesity.
Blog