Ten years ago, as a student of public health, I remember feeling surprised that mental health didn’t feature more prominently on the syllabus. It struck me then, as it does now, that many of the big issues in public health can be seen to some extent as visible symptoms of deeper causes related to psychological wellbeing. Obesity, smoking, and alcohol and substance abuse are all strongly associated with poor mental health. And yet public mental health appeared to be considered a niche interest.

So it's gratifying to see Public Health England (PHE) publish a new suite of resources intended to help local authorities and others make the most of opportunities to prevent mental health problems and to promote good mental health in their local population. This is far from the first time national policy on mental health has tried to direct attention to prevention and promotion (it was at the heart of the national service framework back in 1999), but it’s an area where good intentions have often led to limited action. So, in a world of thinly stretched public health budgets, how highly is work on public mental health currently being prioritised? 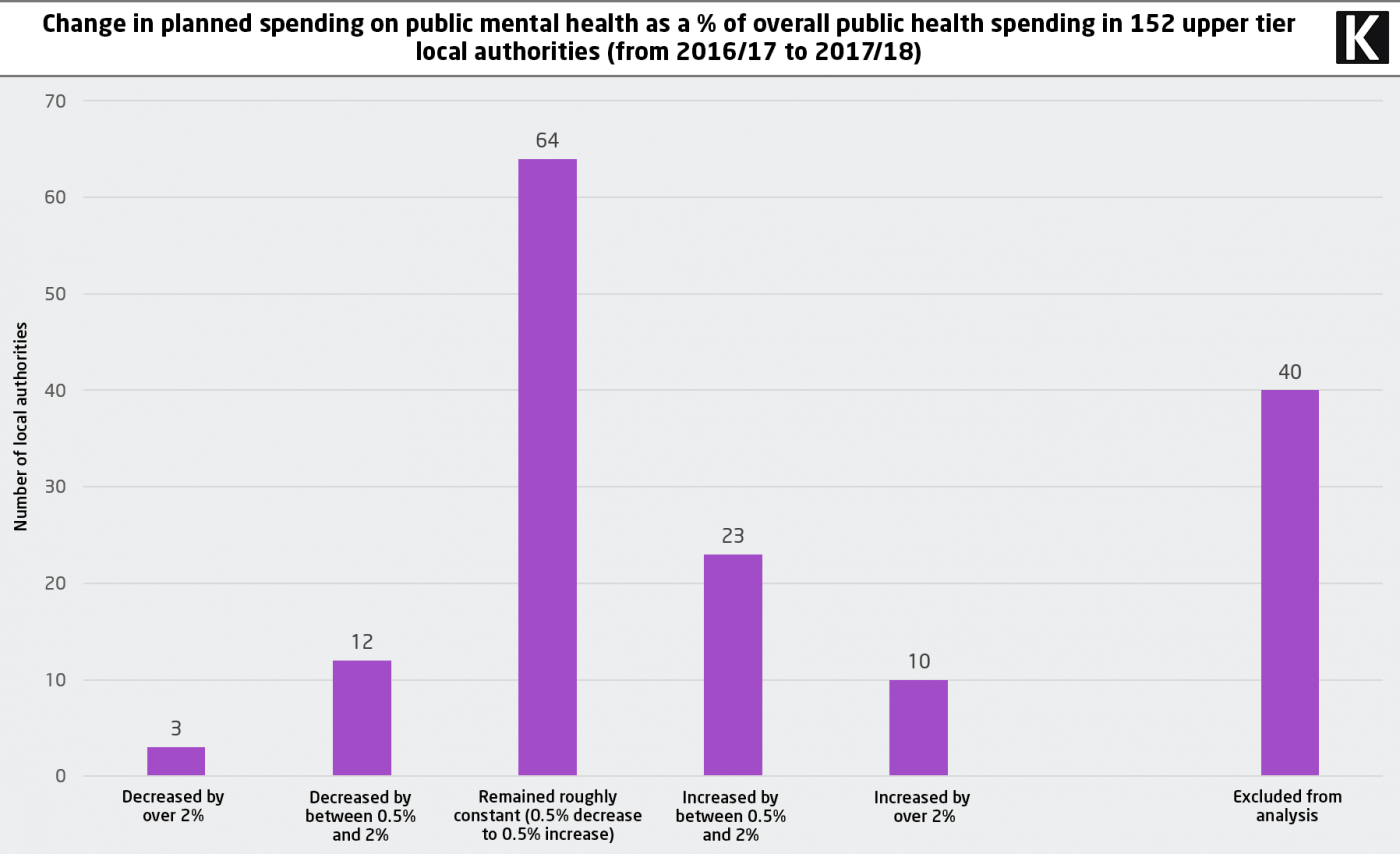 But do these numbers tell the whole story? The trouble with the available data is that in apportioning spend to different programme lines, it is not clear how local authorities have decided what counts as ‘public mental health’ and what does not (and there is little guidance suggesting how they should do so). This might explain some strange-looking anomalies. For example, 37 local authorities reported spending no money at all on public mental health in either 2016/17 or 2017/18. Others have reported wildly different figures for the two years – for example, one local authority reported spending 28 per cent of its public health budget on public mental health in 2016/17, followed by nothing the following year. These sorts of concerns led us to exclude 40 local authorities from our analysis, limiting the conclusions we can draw about spending patterns and how these have changed over time.

There is also a conceptual difficulty in interpreting the data. The prevention concordat aims to ‘deliver a tangible increase in the adoption of public mental health approaches’ across local authorities, the NHS, employers and other public, private and voluntary sector organisations. Adopting a ‘public mental health approach’ is not necessarily the same as increasing spending explicitly assigned to public mental health. As the planning resource document from PHE illustrates, it could also involve adopting certain principles and making the most of opportunities to improve mental health across a broad range of activities. For example, local and national government can help to improve mental health by using wider powers in relation to housing or education and can draw on regulatory and other instruments to encourage employers and others to take action. In other words, direct spending is not the be-all and end-all.

However we interpret the spending data, there is now sufficient evidence about what works to support the idea that public mental health should be a priority. A return on investment tool published by PHE shows that there are several highly cost-effective interventions to improve population mental health. And there are some inspiring practical examples of innovative local work in various parts of England, including an ambitious new programme to improve the mental health and wellbeing of Londoners, Thrive LDN (drawing on the Thrive NYC programme in New York).

It is almost three years since the NHS five year forward view talked about ‘getting serious about prevention’. It’s now time to make sure this extends to mental health.

Alongside the launch of our report on mental health and new models of care, Chris Naylor explores some of the benefits of investing in mental health.
Completed project

A vision for population health in England

This project aims to set out a vision for the public health system and population health, which we will use to inform and influence the debate about the future of public health.

Please contact me . Need you guys on the board. Change needs to happen.
Until we have trauma informed approaches to health care and particularly mental health I see very little shifting positively. Health care and Social care need to address this as one of the most significant public health challenges we have ever faced. We are only scratching at the surface of how soft and hard trauma impacts on emotional, psychological and physical health.

People who have experienced trauma face a number of barriers to accessing health care. Deborah Fenney explains why a trauma-informed approach is essential for supporting a group that currently face poor health outcomes.
Long read

On 7 January, the NHS long-term plan was published setting out key ambitions for the service over the next 10 years. In this explainer, we set out the main commitments in the plan and provide our view of what they might mean, highlighting the opportunities and challenges for the health and care system as it moves to put the plan into practice.
Video

Debs Taylor: The impact of social prescribing on people and communities

Chris Naylor looks at whether mental health is being considered carefully enough in the development of sustainability and transformation plans.