We’ve known for some time that there is a shortage of nurses in England. There’s nothing particularly new in that statement. It’s been said by us at the Fund, the Public Accounts Committee, Health Education England, and the Migration Advisory Committee.

That’s one reason why the decision to scrap the NHS bursary scheme and require trainee nurses and other health care students to take out loans has polarised debate. On the one hand, the government argues that this will create an additional 10,000 university places by making it more financially rewarding for universities to provide places on nursing courses, ultimately significantly increasing the pool of qualified staff. On the other, critics say it will deter people – particularly mature students and those from disadvantaged backgrounds – from applying for nursing courses and will saddle nurses with debt. And this takes place within the context of a wider debate about student finance and calls for it to be reformed.

So what effect has this had on the number of people training to be a nurse? Well, the number of applications for undergraduate nursing places in the UK has dropped dramatically this year: down 19 per cent from 2016.

Fig. 1: Percentage change in the number of applications for all undergraduate nursing courses at universities in the UK since 2013 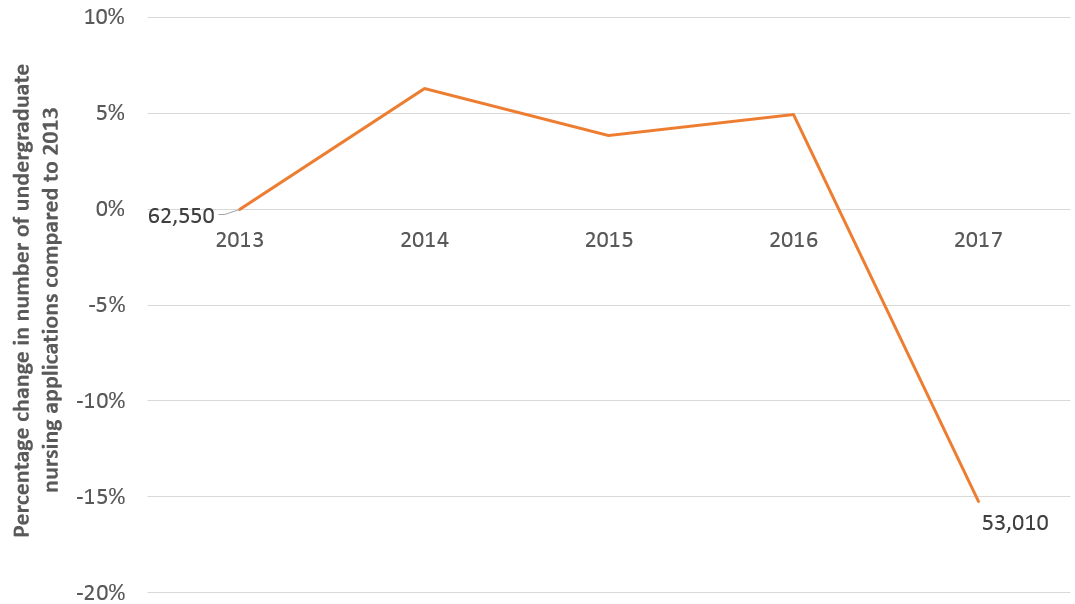 Two important caveats, though: first, student applications are down generally, one possible driver being not only that tuition fees are going to be higher this year but also the loans on them are going to be charged a higher rate of interest from September this year.

We can’t begin to assess the impact of the ending of the bursary on the number of students starting courses until later this year, when UCAS publish data on how many of those applications were successful. While this may reveal an increase in the number of places offered, there are already some causes for concern.

Fig. 2: Percentage change in applications to all undergraduate nursing courses in the UK by age group since 2013 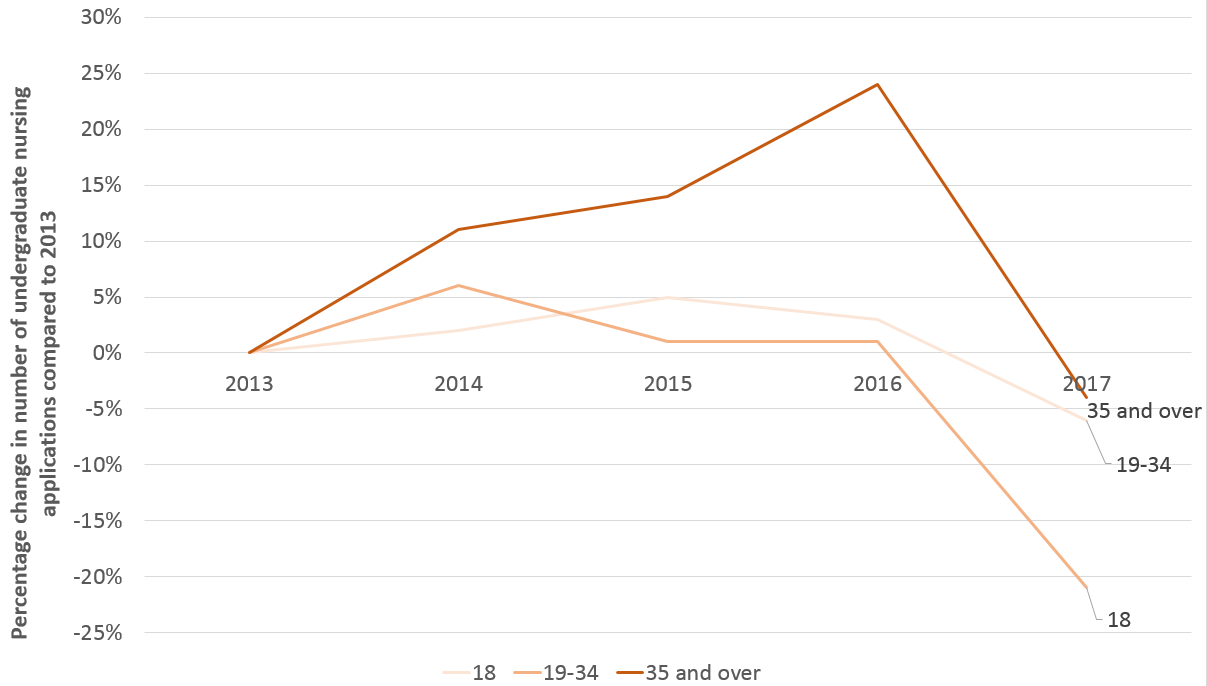 Fig. 3: Percentage change in applications to all nursing courses at UK universities by domicile of applicant since 2013 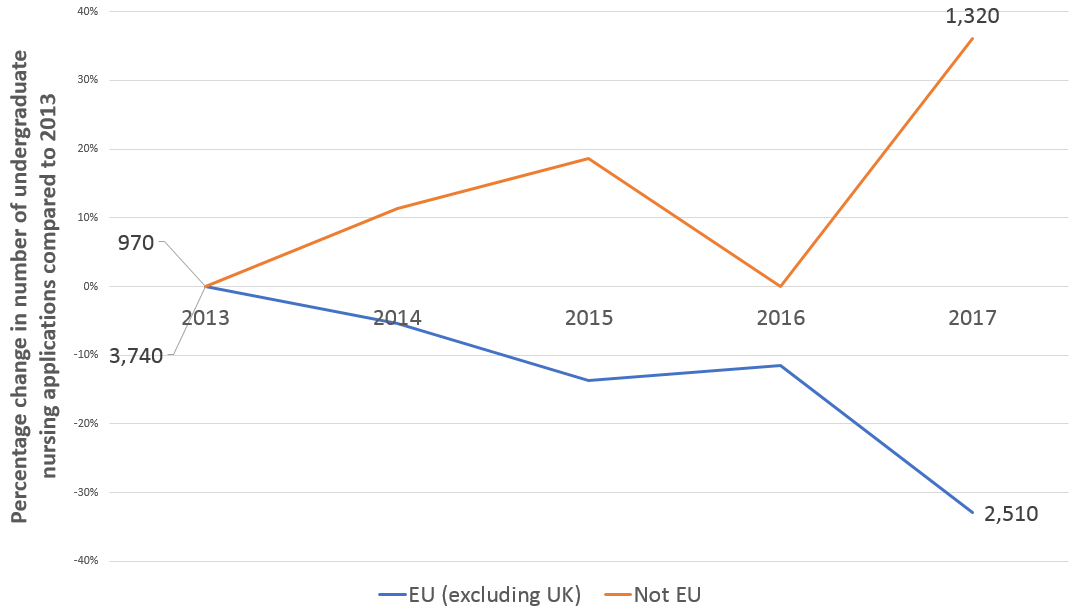 Stepping away from the data on applications for a moment, there are unanswered questions about whether the number of clinical placements can or will be increased at the same rate as the number of places offered. Care providers across all settings are less able to provide extra training places than universities are to provide academic places. Teaching hospitals need to have staff able to oversee and assist trainees, not just provide them with clinical work. There may well be a gap between what universities would like to offer and what NHS providers feel can be offered with a safe level of oversight.

In many ways, there’s nothing surprising in the figures we’ve seen from UCAS. It was entirely predictable that in the face of rising tuition fees and the removal of the nursing bursary we’d see a drop in the number of applications, particularly for people who aren’t coming into higher education direct from school.

If you want to see how this might affect the number of nurses in training, Bolton University and Lancashire Teaching Hospitals, which moved to a fee-paying system in 2014, provides some indication of the possible impact. In June this year, their board papers show they’ve been able to double their number of placements to 120.

However, over time the move to student loans may have other impacts on the nursing workforce. Will there be a change in the profile of the student population? Will having higher debts affect the future pay expectations of NHS staff?

The answers to these questions and others will take much longer to emerge.

Workforce planning in the NHS

This report look at past experience with NHS workforce planning and the challenges facing workforce planning in the future, in the light of changing health care needs and the need to deliver the future care models outlines in the NHS five year forward view. The report focuses on three areas key to providing integrated care: mental health, primary care and community nursing.
Article

Ahead of the general election, we consider the impact Brexit will have on the health and social care workforce.

What this piece does not address is the types of nurses being recruited. One effect of removing bursaries is that courses are open to the market, meaning that popular courses like physiotherapy will oversubscribe and unpopular course like child psychology will be under recruited to!
Thanks for commenting, and making a fair challenge to my analysis. The nursing shortage that exists here in England isn't new, and will likely be made even more difficult if we face tougher immigration controls for overseas staff post-Brexit. The issues raised here aren't going to make much difference dealing with that in the short run.

Unfortunately this data doesn't provide a breakdown by course, though this might be available later in the year. UCAS don't handle applications to the Open University, but as the increase in the interest rate paid on tuition fee loans still applies, you might expect to see a drop in applications.

Given that the most marked drops have come in older age groups, it would be reasonable to expect that courses such as Advanced Practice would see the biggest drop in applications. Again though, a drop in applications is a price we should be willing to pay if it actually means more people being accepted into courses. More on that in December.
Very timely blog that I expect will create significant debate. You have posed some interesting and disconcerting points. At a time when the numbers of EU applicants for nursing posts are reducing with no real clarity re full impact of "Brexit"; the need for nurses to undertake medical roles increasing and student numbers overall reducing, one wonders at the rationale for removing bursaries now.
From your information are you able to break down the numbers of students for post grad nursing courses, for example Advanced Practice? How many will actually be new to the profession?
Changes proposed by the governing body NMC, should improve access to practice placements but that hasn't been tested yet.
Also your figures may not include Open University places? This is a great route for people not coming directly from school.