It is rare that any service hears from 800,000 of its users at the same time, but that is what happened recently with the publication of the GP Patient Survey. It is easy to dismiss this kind of survey, particularly when the results make difficult reading – the questions are wrong, it doesn’t reflect the right patients – but when this number of people have taken the time to give their views on the services they receive then we should take the time to listen to what they are telling us.

What they are saying will be giving cause for concern for national policy-makers. For the past five years the scores for many measures have dropped year on year, albeit often from a relatively high baseline. Some drops are larger than others, but overall there is a decline in patients’ experience of GP services. The percentage of patients who rate their overall experience as good has dropped from 88.4 per cent in June 2012 to 84.8 per cent in July 2017. The sheer size of the sample means that even one percentage point change is meaningful at a national level – a decline on this scale needs attention.

There is relatively little change in satisfaction with the care people received at their last appointment – eg, being given enough time, being listened to and having confidence and trust in the doctor or nurse. The care once people are in the practice does not seem to be the issue; it is getting in that is increasingly a problem.

Most people’s interactions with the NHS are via their GP, so any issues with access will be affecting a large number of people. While overall public satisfaction with the NHS remains high, the time it takes to get a GP or hospital appointment is the top reason given among those who are dissatisfied, as this chart from the British Social Attitudes survey shows: 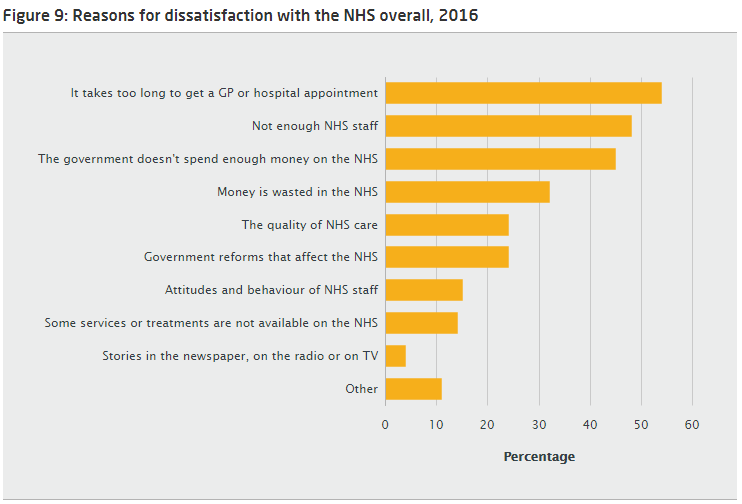 This partly explains the emphasis successive governments have placed on improving access over the past few years.

The key question on access in the GP patient survey asks: ‘Overall, how would you describe your experience of making an appointment?’. In June 2012, 79.3 per cent rated their overall experience as good; in July 2017, this was down to 72.7 per cent. Perhaps more worrying is the variation across CCGs. The difference between the best and worst performing CCGs on this question is almost 30 per cent. 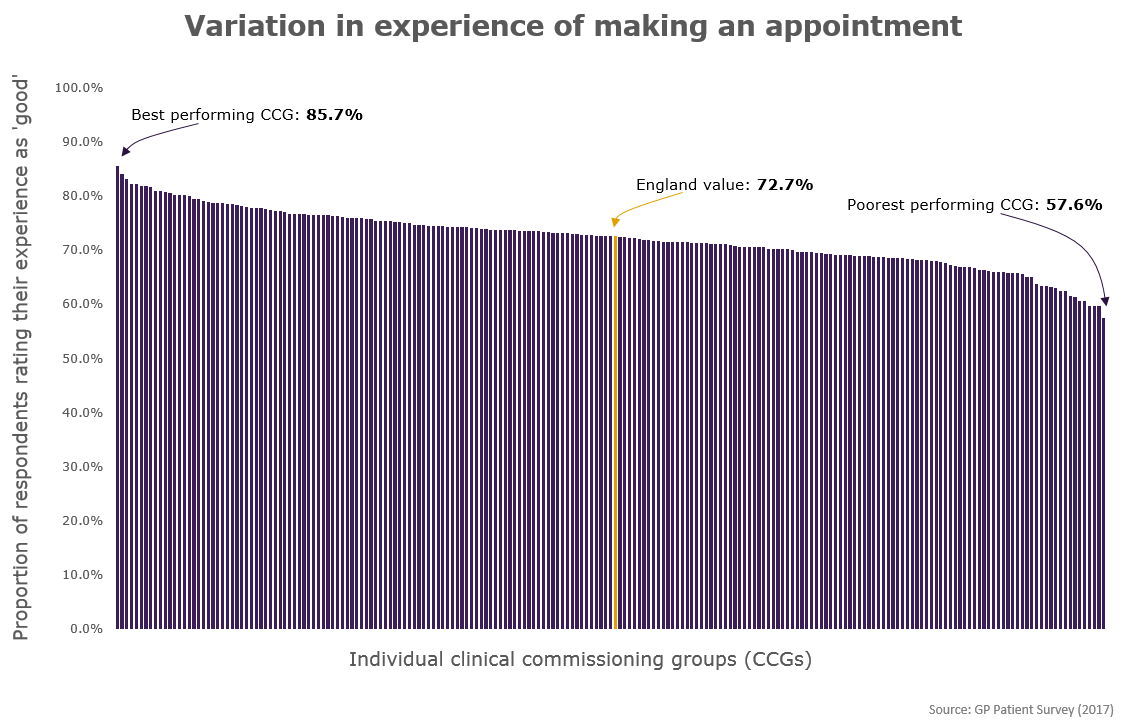 Patients are also finding it harder to get through to their GP surgery on the phone – a drop from 77.9 per cent finding it easy in 2012 to 68 per cent in 2017. This drop might be less concerning if significantly more people were using online services, but this is not the case. 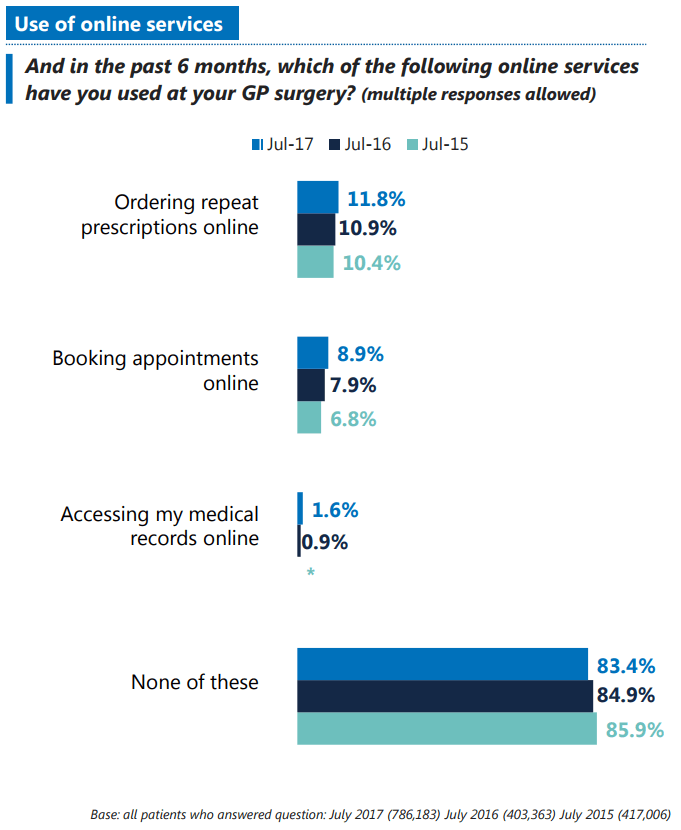 NHS England and the BMA have encouraged practices to register a minimum of 10 per cent of their patients for at least one online service by 31 March 2017, and the figures suggest this has been achieved. However, if digital access is to stand any chance of moderating intense demands on GPs, more will need to be done both to promote the use of online services to patients and to ensure those services provide clear benefits.

As part of its focus on seven-day services, the government has invested heavily in improving access to GP services. In addition to extending opening hours in the evenings and at weekends, there has been investment in new approaches such as telephone and online triage.

So why are people’s experiences of access getting worse? There may be a number of reasons, and more work needs to be conducted on the ground with GPs and patients to find out what is happening – but starting with supply and demand seems to provide some answers. As we found in our study published last year, GPs are under increasing pressure because of both the volume and intensity of their workload. We identified a 15 per cent increase in the number of consultations between 2010/11 and 2014/15. There was also a 28 per cent increase in the number of consultations with people over the age of 85, who are more likely to have multiple health conditions. Furthermore, despite a government pledge to increase the number of GPs by 5,000 by 2020/21, the number actually fell by 0.3 per cent in 2016. Fewer GPs are doing full-time clinical work in general practice, and large numbers are leaving the profession.

The initiatives have mainly focused on extending the hours that practices are open, but if the overall number of GPs is not increasing it’s hardly surprising that just asking them to spread their time over more hours isn’t really helping.

So what should be done?

There is, of course, no easy solution – even increasing the number of GPs through international recruitment is unlikely to be enough. There is clearly variation in access across the country that can be addressed, and CCGs may wish to invest in helping practices become more efficient in understanding and managing patient flow. However, the longer-term solutions are likely to be more complex and involve examining all the ways in which general practice might deliver urgent and long-term care to patients.

It is worth remembering that behind the graphs and statistics lie 800,000 patient stories. We need the numbers, but we also need the qualitative data and insight. Only by understanding what some of these stories are telling us can we truly design services and solutions that are patient centred.

How can GPs provide rapid access alongside long-term continuity of care?

General practice needs not only investment, but also a change in the way services are delivered if it is to meet the dual demands of urgent care and long-term conditions management, says Beccy Baird.
Completed project

This project aims to increase our understanding of the workload in general practice and why GPs report feeling under so much pressure, and to make recommendations about what might be done.
Paid event

I can honestly say nhs has never helped me but has created health problems.
GPS are waste of public money and should be abolished all together. They don’t serve a purpose.
It takes minimum 5 weeks to get an appointment. Patients can’t book more than eight weeks ahead. Even the thought of needing to see gp makes you sick, depressed, causes anxiety and stress and after going through all that you get two minutes and are told to come back next week if you don’t feel better. All doctors work three days a week for nhs and get paid well. It is all about money, patients are a nuisance. Last time I saw a doctor he banged his hands on the desk, yelled, got up and opened the door. I thought no aggressive behaviour is tolerated?…

I think we also need some good data on the reasons why patients are requesting an appointment to see their GP. This could help us better understand what might be necessary when it comes to supporting prevention. If, for example, the data shows that a significant percentage of people are wishing to see their GP because of a 'lifestyle' related condition, this would give even more reason for developing policies that encourage prevention. This could then help to free up the system, put less press on the GPs, and also people with medical conditions such as arthritis or Parkinson's are able to get better access their GP. But also, those people with symptoms suggestive of a neurological conditions are able to get quicker access to specialist services, as they need time with the GP for an assessment and if necessary a referral.

There is, of course, an easy solution.

The introduction of co-payments is the only intervention ever to have shown to reduce use of primary care services. (1) This could be implemented in a proportional way, lower co-pays for lower income patients. Lower co-pays or rebates for preventive interventions e.g. diabetes and hypertension control.

Payments and records could be linked to the inland revenue, and administered through an NHS card (biometrics) that also establishes eligibility for NHS care.

Doctors could still be paid on capitation or salary, removing supplier induced demand, and patient can be charged according to use, incentivising efficient use of resources.

A modern day example the use of carrier bags after the 5 pence fee.

How can we develop professionally diverse leadership in primary care?

What might help a wider range of professionals take on leadership roles in primary care? Kiran Chauhan and Beccy Baird suggest starting with thinking through issues around expectations, support and practical constraints. 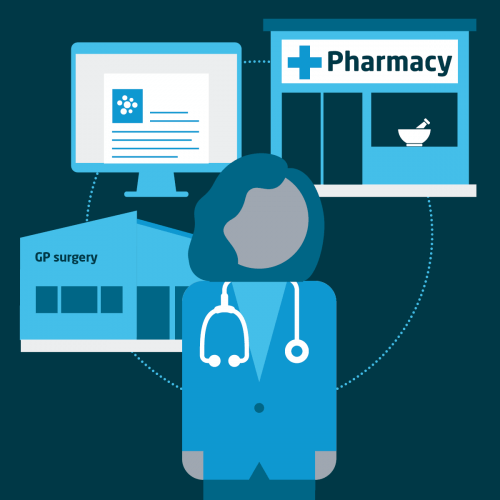 From growing up in her parents’ community pharmacy to leading the Covid-19 vaccine rollout in general practice, Dr Nikki Kanani talks about the values at the heart of her leadership, the power of community, and general practice for the next generation.
Blog