Sustainability and transformation plans (STPs) are a means of NHS organisations coming together with local authorities and other partners to agree the future direction of health and care services in 44 areas of England. Our new report shows that the draft plans submitted last October are wide-ranging, from prevention and community-based services through to acute and specialised services in hospitals. As the local plans for delivering the NHS five year forward view, STPs aim to close gaps in health and wellbeing, care and quality, and funding and efficiency for the populations they serve.

The context in which STPs have been developed is much more challenging than when the Forward View was published in October 2014. Financial and operational performance have deteriorated sharply, and the additional resources allocated to the NHS by the government are being used mainly to reduce hospitals’ deficits. Funds to invest in strengthening and redesigning care in the community – one of the top priorities in STPs – are in short supply, raising serious questions about the credibility of those plans that seek to reduce hospital capacity. Similar questions arise about proposals to prioritise prevention when public health budgets are being cut.

Notwithstanding these concerns, we believe that STPs offer the best hope for the NHS and its partners to sustain and transform the delivery of health and care services. The challenge now is to translate the ambitious proposals contained in the drafts into credible plans, with clarity about the most important priorities in each area. New care models demonstrate how services are being transformed, and their work needs to be shared and spread as rapidly as possible.

We have been supporting the work of the vanguard sites involved in NHS England’s new care models programme. The enhanced care home vanguards in Sutton, Sunderland, Wakefield and other areas are showing particular promise, closely followed by the most advanced primary and acute care system vanguards in Northumbria, Salford, Morecambe Bay, Somerset, North East Hampshire and Mid Nottinghamshire.

Multispecialty community provider vanguards in areas as diverse as Dudley, Stockport and Whitstable also offer a glimpse of a future centred on integrated out-of-hospital care, with ambitions in some places to evolve into accountable care organisations. A number of areas, including Frimley, aim to use STPs to close the care and quality gap by scaling up the work of the vanguards.

Two major challenges face STPs. The first is the need to adopt a realistic timescale for implementation of the plans that recognises how long it takes for innovations in care to become established and deliver results. The second is to create sufficient capacity to build on the foundations that have been laid already, when so much attention is being given to financial and operational pressures. New care models have the potential to address the root causes of these pressures in the medium term, which is why transformation and sustainability must be seen as two sides of the same coin.

NHS England and NHS Improvement should work together to oversee the development of STPs, and the government should support proposals to improve services. This should include backing plans to reconfigure acute and specialised services where the case for change has been made. The NHS also needs to strengthen the leadership and staffing of STPs without adding unnecessary complexity to an already cluttered organisational landscape.

Wherever possible, the proposals set out in STPs should be taken forward by NHS organisations and their partners working at a local level, with STPs leading only on those priorities that require co-ordination across a bigger footprint.

In the immediate future, these challenges have to be addressed by using existing resources more effectively and setting aside planned increases in funding to support new care models. In the longer term, the need to find extra resources for social care is becoming ever more urgent, while the claims of the NHS will also require a response given the infinitesimal growth in its budget planned for 2018/19 and 2019/20. It is no longer credible for the government to argue that it has provided ‘the funding needed to deliver the NHS’s own plan’ when most of the additional funding identified in the 2015 Spending Review is being used to keep services afloat rather than to transform care.

Little is known about the process of developing sustainability and transformation plans. This report looks at how STPs have been developed in four parts of the country.
Press release

Politicians must be prepared to back NHS plans

The government must be prepared to back radical changes to health services to secure the future of the NHS, according to a new analysis of sustainability and transformation plans (STPs) published by The King’s Fund.

What are the opportunities and challenges in implementing sustainability and transformation plans?

How have STPs developed over time?

This interactive timeline shows how sustainability and transformation plans have developed since December 2015.
Report

STPs offer the best hope for the NHS and its partners to sustain services and transform the delivery of health and care, but how will STP footprints transform their plans into reality? Our report identifies the challenges that lie ahead.

In response to your comment about our income, the Fund receives less than 5 per cent of its funding from government departments and national bodies.
So here we go again! Way back as far as 1974 amalgamation between NHS and Social services provisions were promoted as the way forward. (Remember Joint Consultative Committees?). It never happened of course because of turf wars between Local Authorities and the local Health Authorities, quite apart from the flat refusal of the relevant bodies to sacrifice any of their financial benefits.

I predict STPs will proceed as ordered by the Treasury to be followed, in about 3 years time, by the 'revelation, that Social Services have not fulfilled their part of the bargain.

Disconcerted to learn that the Kings Funds is reliant on the Government for one third of its income and that two members of our CCG are paid £85,000 to £100,000 for their 'impartial' advice.

Have copied this submission to the national press
Interesting point of view Chris which avoids the real point about STP's which is to arrive at the point at which providers eliminate their deficits by taking the deficit figure and working back via the STP plan to make the cuts , apologies ,changes needed to do so.

Dress this cuts process up with the cloak of new services and new ways of treating people and give it a catchy title , STP's , promise co operation with social care so that the NHS and Social care provision works together and promise savings from this. The big hole in all this is that the politicians since 2010 have cut social care by £5.6bn and via the Nicholson challenge the NHS cut more bn's though there is debate by precisely how much.

What is not up for debate is that this government is simply not funding the NHS sufficiently for it to provide services , STP's are a way of masking this and the cuts needed to balance the books. I would not argue that the NHS needs to move forward and always be improving but STP's are not about that and just to give one small example last year CCG's in Kent were offering patients the choice of going to Calais or Le Touque in France for routine operations as there was not the capacity for them to have them in Kent , the STP plan for Kent and Medway has a cut of 300 acute beds in it , the French it seems manage to plan quite well for bed capacity. The Kings Fund does a lot of good work on the NHS but on STP's the line sounds too familiar to that emanating from NHS England
So! It's all about cuts then eh! Do not insult our intelligence!

Is rising demand for hospital services inevitable? Chris Ham celebrates the work of new care models that are successfully bending the demand curve. 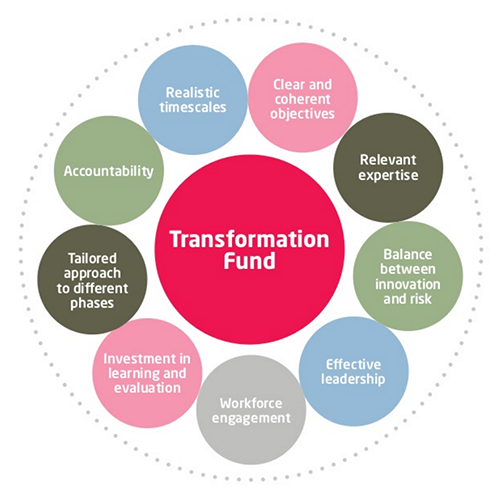 A Transformation Fund for the NHS

How would a Transformation Fund work? And how would it be implemented? Our infographics give a quick overview.