2017 marked the 120th anniversary of The King’s Fund. We shared highlights from our digital archive to bring our history to life and celebrate some of our achievements. This blog – the first in a series exploring our history – looks at how the Fund was created and how it raised and spent money in its first decade.

The King's Fund was set up in 1897 as an initiative of the then Prince of Wales to celebrate 60 years of Queen Victoria's reign. Victorian times had seen many advancements in medicine and technology, from the discovery of x-rays to the foundation of the British Medical Association. It was also an era of great philanthropy. It was within this context that the Fund was established with the initial aim of raising money for voluntary hospitals, which cared for the poor.

The origins of the Fund can be traced to a meeting in 1896 between the Prince of Wales, Sir Henry Burdett – widely known for his interest in hospitals and particularly nursing – and Alfred Fripp, a surgeon from Guy's Hospital. It was at this meeting that the Prince agreed to host a fundraising dinner to raise money for a central fund for London hospitals. The list of invitees (p 10) included financiers, religious leaders and politicians.

A letter (p 64) announcing the creation of the Prince of Wales Hospital Fund for London, signed by the Prince of Wales, was printed in The Times on 6 February 1897. This outlined the purpose of the Fund as being a fundraising organisation for voluntary hospitals. It also introduced members of the committee and invited people to buy annual subscriptions as a way of raising funds.

This initial fundraising drive included selling commemorative stamps, each displaying the crest of a London hospital that would be supported by the Fund. This raised £34,000 before the Bank of England destroyed the plates on 9 July 1897 to ensure that these stamps remained a limited edition souvenir.

So, how was the money distributed? The Fund’s first annual report (p 14) tells us that various institutions – including general hospitals, children's hospitals, women’s hospitals and other specialist hospitals – received donations. The money was used to ‘assist them in carrying out greater efficiency and in increasing their usefulness’.

In the first years of the Fund, other fundraising activities included the Hospital Shopping Day (p 7), an appeal to London shopkeepers to give a percentage of their takings on a given day to the Fund.

When Queen Victoria died in 1901, the Prince of Wales became King and the Fund became known as the King Edward's Hospital Fund for London. The £18,663 raised as a coronation gift for the new King was donated to the Fund, ensuring that the Fund could continue its work in supporting voluntary hospitals. 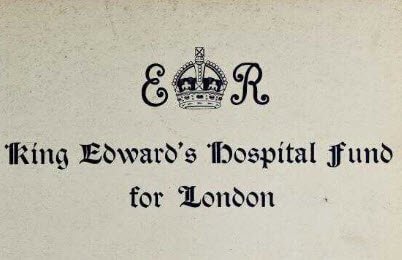 In the next blog in the series we will see how the Fund operated during the high level of demand on hospitals as a result of the First World War.