Sustained concern about the state of adult social care – most recently expressed by Conservative-controlled county councils such as Surrey and Kent – has led the Prime Minister to ask the Cabinet Office to look at options for a more sustainable social care system in the longer term. And with A&E pressures currently in the headlines, it is not surprising that delays in discharging patients who need social care have come under the spotlight.

The Prime Minister recently told parliament that ‘Some local authorities, which work with their health service locally, have virtually no delayed discharges. Some 50 per cent – half of the delayed discharges – are in only 24 local authority areas. What does that tell us? It tells us that it is about not just funding, but best practice.’

She has a point. Our analysis of the latest figures available, covering November 2016, shows very wide variation between councils in the number of days delayed for social care reasons (such as delays in assessments or arranging care at home). Taking account of the size of each area’s older population this ranges from 0 to 25 days (Figure 1). Some 13 per cent of councils account for a third of all delayed days, 22 per cent account for half. 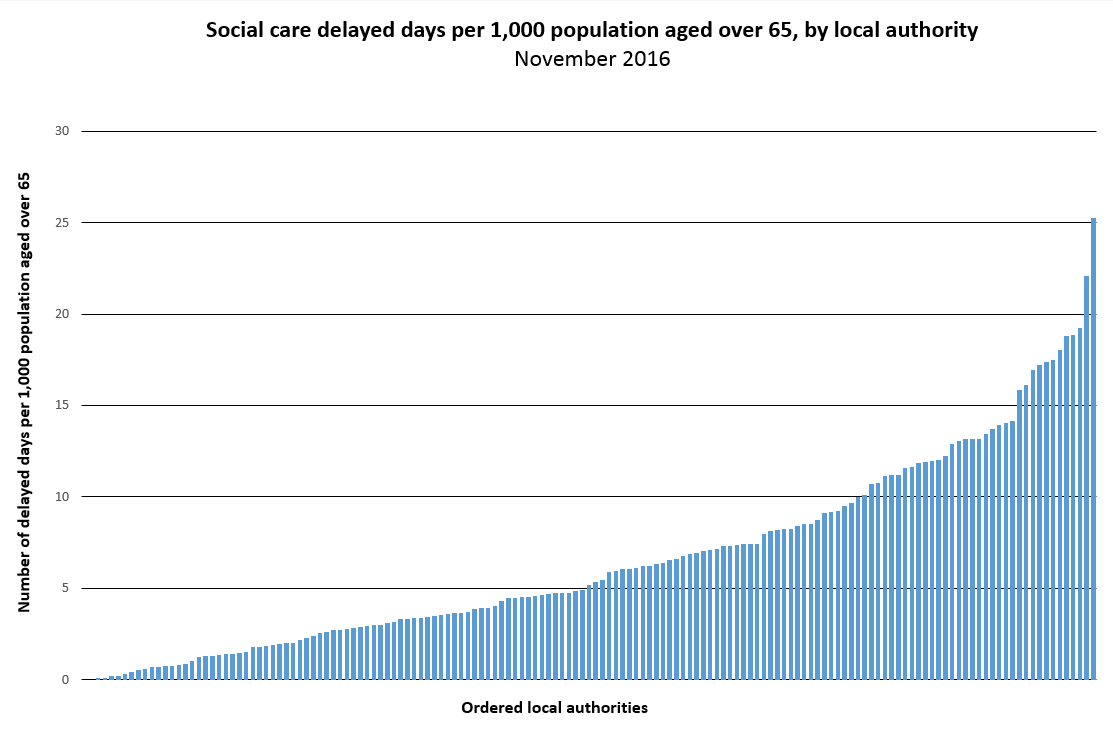 There is no clear relationship between the level of funding and the number of delays, as shown by the wide and scattered data points in Figure 2. Councils that have cut spending the most on social care for older people over the past six years perform no worse than councils which have maintained or increased spending. This may be because all councils, irrespective of their financial position, are expected to give priority to supporting timely hospital discharge in how they use their Better Care Fund grant. 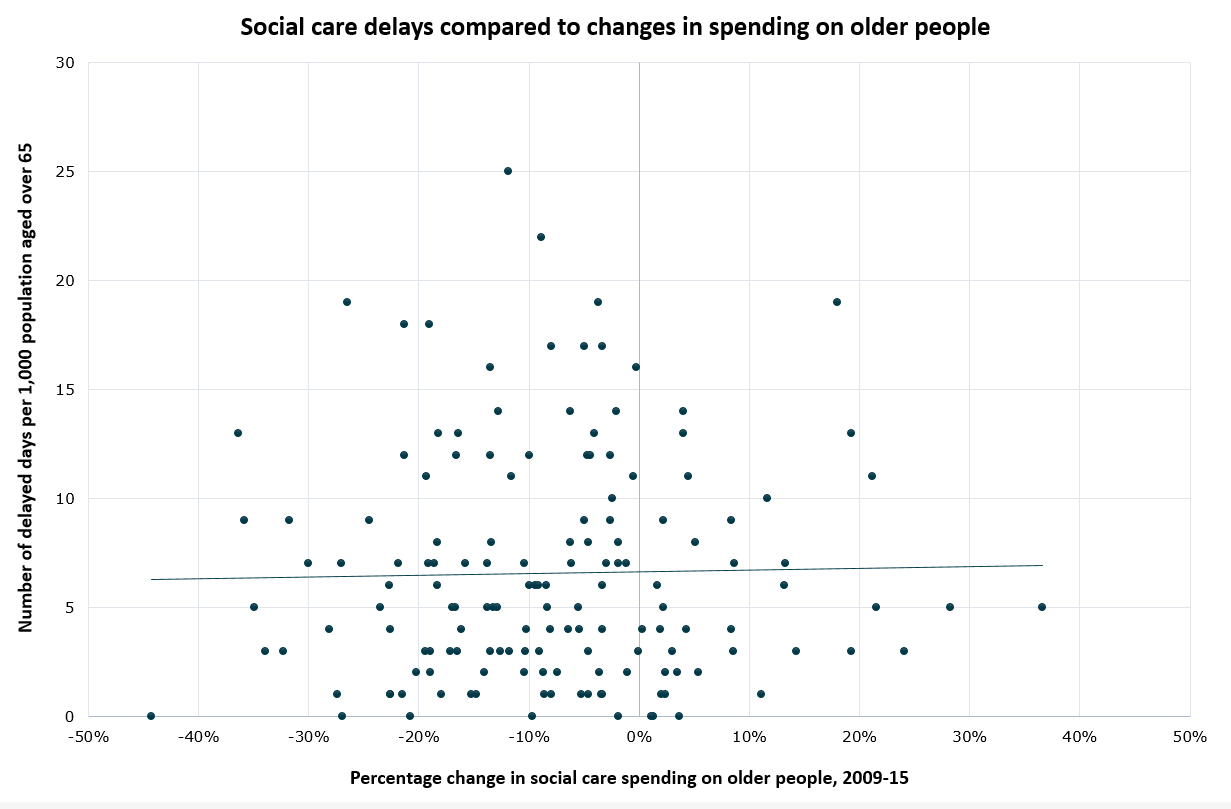 Good partnership-working between local government and NHS obviously helps to avoid delayed discharges but is no guarantee of good performance – for example, some of the Greater Manchester councils had the highest level of delays but other places also in the forefront of integrating health and social care like Northumberland, Nottinghamshire and North East Lincolnshire had the lowest.

But if we turn to delayed transfers for which the NHS is responsible – usually waits for other NHS services – the variation is even wider – from 2 days to 33 days per 1,000 population over the age of 65.

It is clear that places with higher delays for social care reasons are much more likely to also have higher delays for NHS reasons. This implies that there are issues within the local health and social care economy as a whole that drive the level of delays and so the focus ought to be on the performance of the system rather than individual organisations within it.

And although delays for social care reasons have increased sharply over the past 12 months, the majority of delays – 57 per cent – are still due to waits for further NHS services. The fact that most places no longer ‘fine’ councils for delays suggests a recognition that this is shared problem requiring collaboration not blame. Holding councils culpable for delayed transfers is therefore inaccurate, inappropriate and unhelpful. But that does not let them or their NHS partners off the hook.

The fact that there is no single or simple national explanation for the variations places the onus squarely on local leaders to understand what drives local performance and to explain why, as the National Audit Office found, basic good practice is still not in place everywhere, 14 years after the Department of Health first issued comprehensive guidance. Unacceptable variations in basic performance undermine the case for additional funding. As the NHS Providers' review showed, there is no shortage of excellent local initiatives, and promoting the spread of good practice will be a theme of our forthcoming event on safe transfers of care.

There in an important caveat about the accuracy of these figures. If anything they are likely to underestimate the scale of the overall problem, irrespective of which organisation is responsible – as Nigel Edwards, Chief Executive of the Nuffield Trust, has discussed. Some of the variations may be due to local differences in how delays are recorded.

The Prime Minster is right to say that the pressures on health and social care are not just about money, but that does not mean that money is not an issue. Delayed transfers are a symptom of the system’s deeper failure to offer the right care, in the right place, at the right time. In our Home truths report with the Nuffield Trust we highlighted underinvestment in a range of services – primary care, community health and social care services – that are vital to support older people to remain at home and avoid admission to hospital and residential care. If it is not ‘just’ about the money, neither is it ‘just’ about social care. The lack of these basic services offers a more plausible explanation for more older people ending up in A&E and getting stuck in hospital when they are medically fit for discharge. This is especially so for very old people with high levels of acuity and co-morbidity.

It is hard to see how current pressures on social care services or hospitals will be assuaged without substantial additional investment in community-based services alongside local reform and improvement. The Cabinet Office review is looking at how to secure sustainable funding for adult social care – the question is no less urgent for the NHS.

Why is it more difficult than ever for older people to leave hospital?

David Oliver looks at the findings of the National Audit Office report and considers why hospitals are still failing to discharge older people on time.

George we would love to be part of your upcoming events and share with you his we are helping delayed discharge. 07775823988 would be great to hear from you.

Richard, yes many inefficiencies exist and again would love to share with you how we aim to overcome these.
As ever I will start by saying 'no one likes a whinger' and add straight away - 'wise and useful commentary Richard - again as ever'.
There is a great need to keep the plight of H&SC high on the agenda of course however I'm feeling a degree of risk that after a time the issue becomes normalised and accepted as the status quo where we (or the previously sympathetic & outraged recipient) become perhaps blasé about it all.
We know the story well now. Pressure across the system. David Oliver comparing hospitals to prisons in his latest piece in the BMJ, care homes folding week on week and massive poaching of staff adding mayhem to our collective workforce challenges, recruitment agencies recruiting for services then immediately poaching them again in a vicious and destabilising cycle and increased scrutiny and higher expectations. It's not just abou money indeed. But not whinging as I said. #justsaying !
So Solution focused thinking. Well I'm a big fan of creating positive noise based on credible 'can do' attitudes like many hands on providers we have an abundance of energy and enthusiasm look no further than the Devon Care Kite Mark as an example of dynamic innovation. Not funded one jot thus far unlike the huge investment we've seen in the NHS Vanguard initiative. We do have care home Vanguard lead William Roberts spending the day with us in March where we hope to impress him with our version of what good looks like to address DTOC. Including assertive inreach, datasharing to match folk needing onward care with local residential care vacancies, combining homecare with twinned care homes for collective buddying and more do able ideas. We even have a Vanguard learning event planned for the summer ( we want you to come be part of it in fact) and a meeting with Angela Pedder our Devon STP lead in a few weeks to talk about how we unite against the common enemy That's the perfect storm of factors causing us to fragment rather than collaborate in a constructive and creative way. Sorry about more effusing here. It's just that it's important !

Illustrated summary of the Barker Commission's final report and recommendations on separate systems for health and social care.

The Barker Commission answered the question of whether having separate systems for health and social care is still fit for purpose.
Blog

Who should pay for social care services?

In her new data blog, Yang Tian draws on previously unpublished results from the most recent British Social Attitudes survey to see what the public think about who should pay for social care services.

Debate in the House of Commons - the future of social care: Briefing

In this briefing for the Debate in the House of Commons, we set out our thoughts on the future of social care, the Dilnot Commission and how the integration of health and social care could be implemented.