After months of waiting and numerous delays, the government’s childhood obesity plan was finally published in mid-August (which also happened to be during the Olympics, when most of us were sitting and watching comfortably from our sofas – and when parliament was not sitting, in this case definitely a bad thing).

Expectations were high. Writing in the Daily Telegraph just a month ago, Simon Stevens labelled obesity ‘the new smoking’ and called for an ‘activist’ strategy with comprehensive action on food reformulation (changing the nutritional content of processed foods) and on promotions and advertising of unhealthy food and drink. Jeremy Hunt has described the rise in childhood obesity as a ‘national emergency’ and promised a ’game-changing’ response from the government. Now that the dust has settled, was it worth the wait?

The childhood obesity plan (no longer a strategy) is certainly slimline at a mere 13 pages, but it is no tonic. It dutifully sets out the scale of the challenge, including the cost of obesity to the NHS (£5.1 billion every year) and recognises inequalities in obesity. But it essentially stops there, failing to mention its estimated cost to the economy of £27 billion, due, for example, to its effect on productivity, earnings and welfare payments. This is a telling omission, and indicative of the extreme narrowness with which those in the upper tiers of government appear to understand obesity, its causes, effects and therefore its solutions. It is also particularly ironic given that the impact on the food and drink industry – and therefore on jobs and the economy – was reportedly one of the reasons we have ended up so far from a game-changing strategy.

Ever since the government’s Foresight report on obesity was published back in 2007, it has been widely known and accepted that obesity is not an issue that can be tackled through the selective use of one or two approaches. It requires a cross-society, cross-government response. Especially as – revealed in the week before the launch – we have all been systematically undercounting the calories that we consume.

The Health Select Committee looked at childhood obesity in depth last autumn, prioritising nine recommendations in its report Childhood obesity – brave and bold action. The table below illustrates my take on how the plan stacks up against these.

How does the childhood obesity plan measure up? 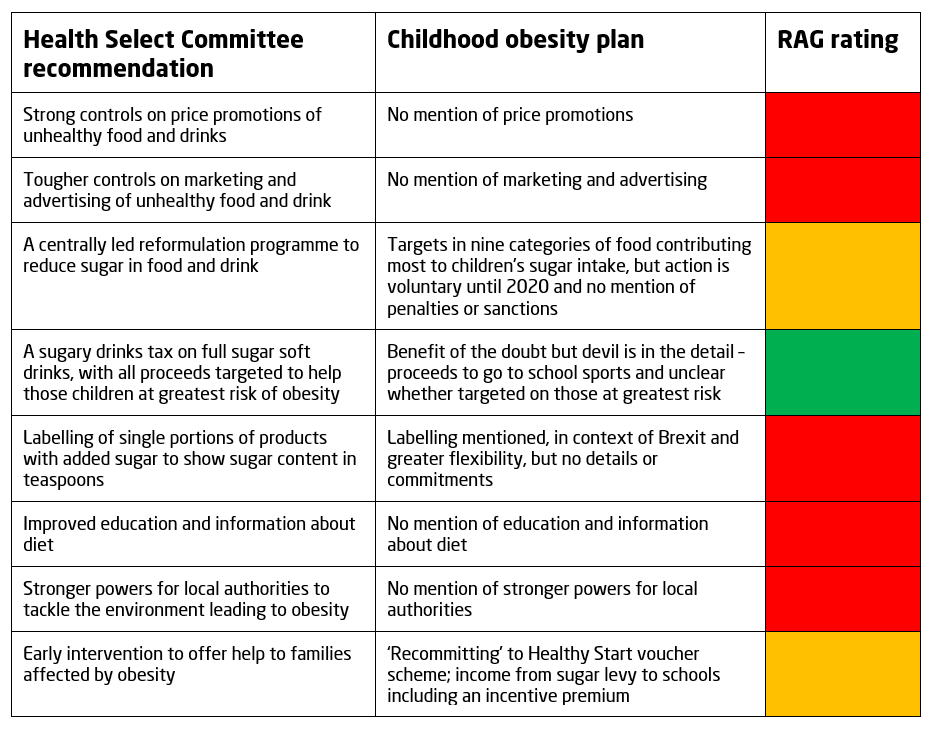 The plan re-affirms the government’s commitment to a sugar levy (already announced by the last Chancellor in the Budget). It also commits to calorie reduction through product reformulation in nine categories of food (those that contribute the most sugar to children’s diets, such as cereals, biscuits and cakes) on a voluntary basis, with Public Health England given the job of monitoring progress. Product reformulation is a good thing. But the danger is that, like the last government’s Responsibility Deal, which placed the onus on the industry to lead the way in tackling obesity, it will fail.

Sainsbury’s and the British Retail Consortium are among those who have criticised the plan and called for mandatory targets. It beggars belief that the government has misjudged the response of leading voices in the food retail industry, who recognise the need for the government to play a stronger co-ordinating role. To have any chance of working, voluntary action must be backed up with strong, swift and credible threats of regulation. But the plan is unbearably weak on this, stating that if there has not been sufficient progress by 2020 then the government will ‘use other levers to achieve the same aim’.

But even more worrying than this – as the table shows – is that the plan either ignores, or only weakly responds to, most of the Select Committee’s recommendations. If this RAG rating was on the front of a sandwich it would be seen as very unhealthy indeed. Where is the reference to the ‘radical upgrade in prevention’ from chapter two of the NHS five year forward view? Where is the role of the voluntary and community sector? Where is the challenge to – and recognition of – the role of local government? As the chair of the Committee Sarah Wollaston has said, with their public health budgets being cut local authorities are in dire need of other levers, such as stronger planning powers, if they are to play their full role in tackling obesity.

In short, where is the delivery plan for a cross-society, cross-government approach to childhood obesity? A bold and brave strategy? Not in those 13 pages. The plan concludes with a promise that this is the start of a conversation, and that government will ‘monitor action and assess progress, and take further action where it is needed’. Personally, I won’t hold my breath.

The Budget: sugaring a bitter pill for public health?

David Buck considers the implications of the recent Budget announcements for the future of public health.
Blog

David Buck questions whether a 'fat tax' would help or hinder the government's attempts to curb obesity in England. 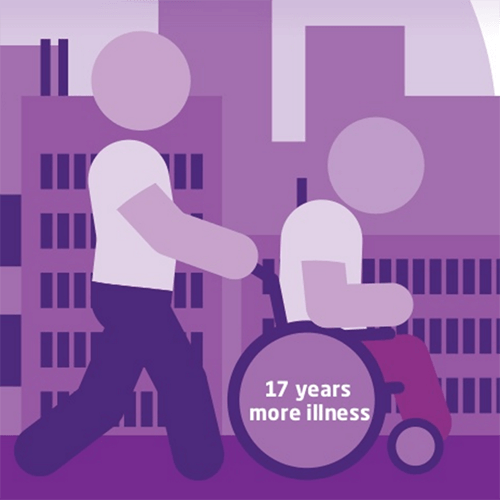 We look at trends in adult obesity, childhood obesity, diet and physical activity in England.
Report

Inequalities in life expectancy: Changes over time and implications for policy

This report from David Buck and David Maguire explores how the relationship between income deprivation and life expectancy has changed over time and looks at the impact of other variables such as employment, housing deprivation, binge drinking and diet.

No mention of children with learning difficulties. Most are very tall and very overweight. These children are too large to join in with children their own age. Too young to go to gymnasiums. Inclusion for all is pointless if they are not included. Majority of public accept and include. I have an obese grandchild with low muscle tone. Can't ride a bike. Loved the climbing wall that he climbed when small. Can't use the one in the gym as he is too young. He is too large to use children's amenities. Believe me, we have tried every avenue available. Until he is able to join a gym he will get larger and more difficult to reduce weight. He is 9 years old. His weight is not because he over eats. It is because he is not included by the very fact there is nowhere for him to go. Exercise machinery should be in all public parks for adults which would allow children like my grandson to use. Cycling, rowing. Running, anything to get the body moving for everyone. Removing sugar will not work for this group of children.

Until you take the Big Business interference out of Government, then you won't get anywhere with this. Vested interests are at the heart of this.

Also they need to ditch the health advisers and replace them with people that know their stuff.

What’s the best way to tackle serious youth violence such as knife crime? What does a public health approach look like and does it work? Helen McKenna sits down with Karyn McCluskey, who pioneered this approach in Glasgow, and Martin Griffiths, Vascular/ Trauma Surgeon at Barts Health NHS Trust.
Blog

Less than a year since its underwhelming first attempt, the government has just released round two of its plan for childhood obesity. What has the government learned since the last time round and is it still pulling its punches?
Blog

What do child health indicators tell us?

What do the recently published child health indicators tell us about how well children are doing? And how could the indicators inform a cross-sector strategy for children in England? Jill Roberts looks for answers.
Blog

The conundrum of children’s and young people’s health: time to address it

David Buck looks at the seemingly paradoxical trends in children and young people's health and wellbeing, and argues that it's time for policy-makers to start responding.