New international accounting conventions suggest that the United Kingdom is spending much more on health care, both publicly and privately, than previously thought. The latest spending figures for 2014 published by the Office for National Statistics (ONS), adjusted to comply with the Organisation for Economic Co-operation and Development’s (OECD) system for health accounts,have added around £21 billion (€27 billion; $30 billion) to health spending – an overnight leap of 13 per cent from the previous estimate for 2014. It also means that total public and private spending on health jumps from 8.7 per cent of gross domestic product (GDP) to 9.9 per cent. Can this be true, and what does it mean?

What it doesn’t mean is any material change in actual spending. The budget for the NHS, for example, has not suddenly increased. But it does have implications for how UK health (and social) care spending compares with that in other countries and raises the tricky issue of the boundary between health and social care (and even perhaps whether there should be one at all).

Applying the new accounting rules has meant that around £8.7 billion of spending previously counted as health spend is now not counted but that £29.4 billion previously counted elsewhere in the national accounts (and in part as private spending) is now considered as spending on health care. The net effect is a £20.7 billion increase in health spending. As Figure 1 shows, among the 11 changes in accounting (including a transfer of spending within out-of-pocket spend that in effect cancels out), the big movements are a fall in capital spending (£5.6 billion) and the addition of spending on privately funded long-term care (£9.5 billion) and publicly funded health-related social care (£13.5 billion). 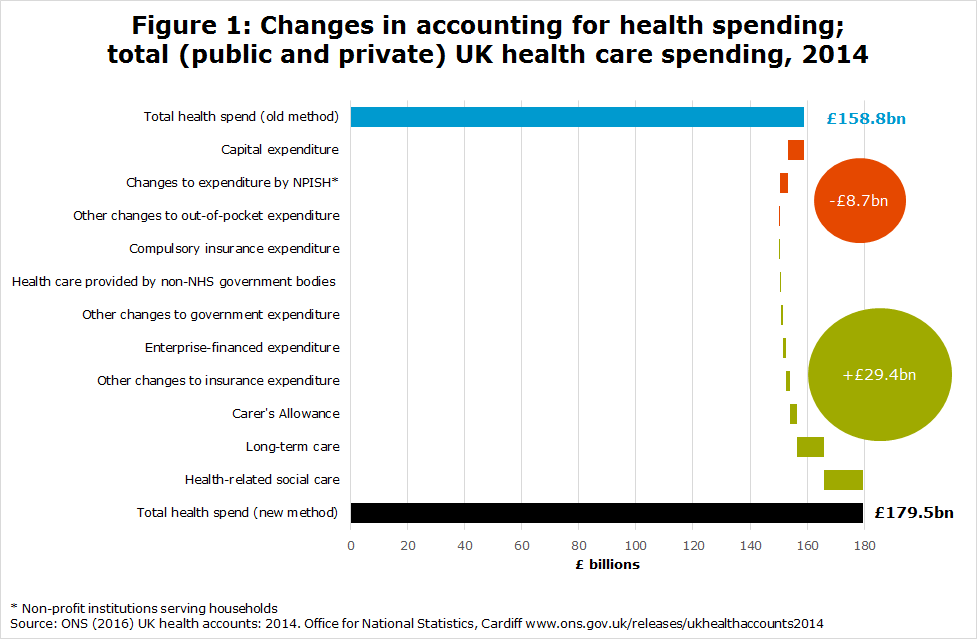 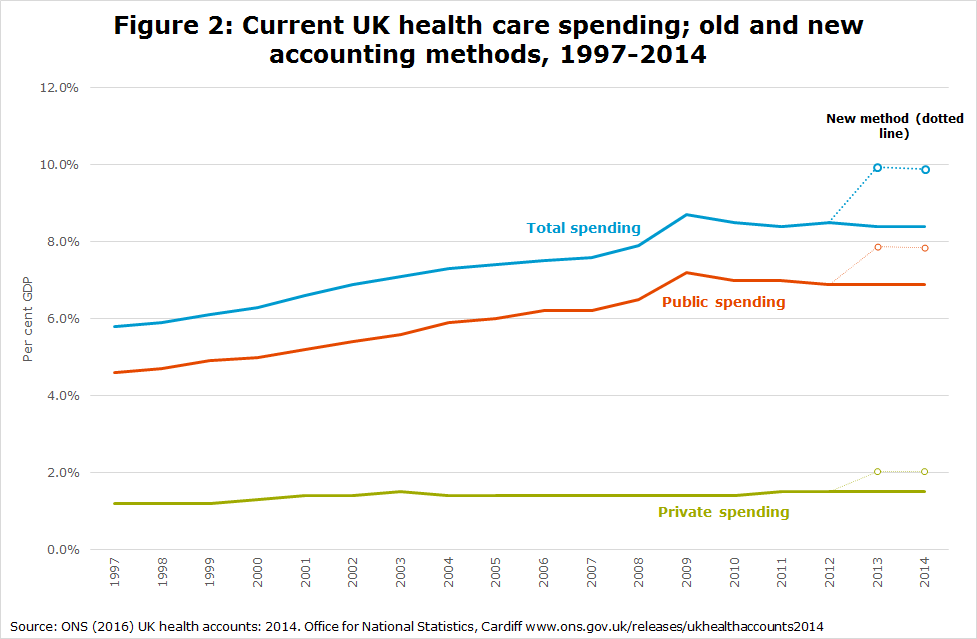 The bulk of these changes are down to reclassifying a big chunk of publicly funded social care spend as health care spending. This means that the increase in the UK’s combined public spending on health and social care under the new accounting methods remains largely unchanged, with the main addition being the inclusion of the Carer’s Allowance, worth £2.4 billion in 2014.

Although the new health accounts now include spending on local authority nursing and residential care as well as other health-related aspects of social care spending, at the level of individuals it can be difficult to make the distinction between these sorts of consumption. An ageing population and changing patterns of disease are making it much harder to demarcate health from social care needs, as the Barker Commission pointed out. Should we move to simply considering health and social care as inseparable—that is, as ‘care’?

The new health accounts are likely to change the UK’s position in international health spending rankings (see Figure 3). Several other countries that are either already using the new accounting framework or have piloted the new system report little or no change in their health spending. Some, notably Sweden, report a big jump – from 8.5 per cent to 10.6 per cent of GDP between 2010 and 2011 – largely as a result of the accounting changes. The full extent of the new system of accounts for other countries will be known later this year when the OECD publishes the latest data on spending. 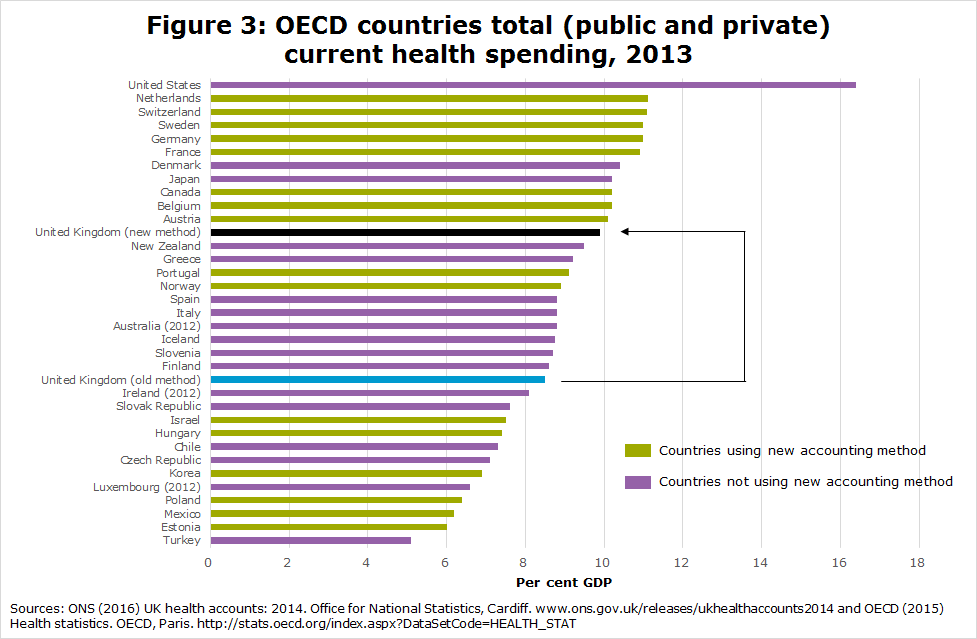 This blog is also published on The BMJ.

John Appleby looks at how much we would need to spend on health to close the spending gap between the United Kingdom and other EU and OECD countries.
Report

One wonders what the USA would come out at if they conformed to the new definition! Presumably the considerable direct spend in the private sector by the NHS has not lead to double counting?
It seems to me there are two ways of addressing funding shortfalls identified by measurement. One is to change the funding; the other to change the measurement ! The government are doing the latter.

They try to pull the same stunt with measurement of child poverty, NHS satisfaction and recently Hunt proposed changing the counting of 4 hour A+E waits to only include "emergencies" . So anyone still alive after 4 hours clearly was not an emergency and can therefore be discounted ?
I would like to see/use the actual numeric data/spreadsheet. It is not possible to get an accurate enough read from a graph. I'm wanting to see actual underfund compared with likes of France, Germany, Holland, Sweden & Switzerland. AND KNOW HOW MUCH ACTUAL UNDERFUND THAT IS OVER A PERIOD.
Hi Ed, look at the colours on the chart. The green and purple.
Love from Ed.
Hi John, has this accounting change only affected the England position, or has everyone else's also shifted the same time? I assume from your "before and after" lines on the chart that it is only us? Ed