Jeremy Hunt has claimed recently that in 2016/17 the NHS will receive the sixth biggest funding increase in its history. The claim made health economists like us stop in our tracks, as it appears to describe a very different situation for the NHS to the one we recognise.

To check, we decided to calculate for ourselves how this year’s increase compares. We’re afraid to say, although perhaps not surprised given our previous research, that we have a very different figure. We find that – in real percentage terms – this year it is in fact the 28th largest funding increase since 1975/76.

This might appear a simple issue, but there are important factors to consider for a fair comparison. For clarity this is how we’ve reached our estimate.

The first factor is that full spending data for the NHS in England is not available in a detailed enough form back to the inception of the NHS in 1948. The source we would use is one compiled by the House of Commons Library, and available back to 1975/6. Prior to this only UK data is available, so we can’t make a like-for-like comparison.

Next we need to remove the effect of inflation. This is standard practice when looking at funding over time, to address the fact that while some years’ increases may be larger than others in cash terms, if prices rise by more in those years then the actual additional purchasing power available may in fact be lower. This is done by comparing spending over time to prices in a chosen base year – usually the current year (eg, 2016/17) – thereby removing the effects of inflation.

Another possible pitfall is that we need to compare like-with-like, and so need to be careful with the distinction between the budget for NHS England (NHSE) and for the Department of Health (DH). The government will often quote the extra £3.8 billion for NHSE this year. But as we pointed out in our joint briefing on the Spending Review, the correct measure of total NHS spending is the DH budget, which will rise by the lower figure of £1.8 billion. This includes training of staff, investment in public health, regulation of quality, and national planning and support for providers. These are fundamental aspects of the quality of the NHS as a whole, and there is no logical reason to consider just one part of the NHS budget.

The DH budget, or total NHS budget, rise of £1.8 billion includes the dedicated DH capital budget. Often comparisons are made excluding the long-term capital investments, but investment in equipment and infrastructure is crucial for high-quality sustainable care, so it is important to consider the whole of the NHS budget.

The proper comparison is to look at the percentage change in real-terms increases in funding. Clearly an increase of £1.8 billion would have had a much larger impact in 1975/76 when the budget was around £30 billion (in 2016/17 prices) compared to today’s budget of £120 billion. It would be 6.7 per cent for the 1975/76 budget, compared to 1.6 per cent today. So the fairest comparison is to measure the real-terms percentage increase in each year.

On this basis we calculate that this year’s total NHS real-spend increase of 1.6 per cent is the 28th largest increase since 1975/6 (see the chart below). 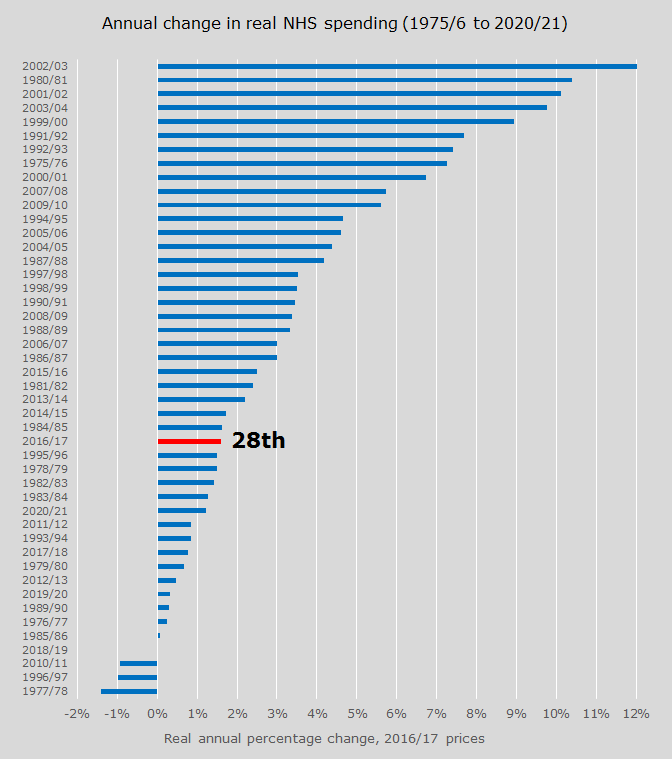 Getting public spending figures right is important, otherwise they can mislead and detract from the real issues. The fact is that the NHS is halfway through its most austere decade ever, with all NHS services facing huge pressures. Accuracy and transparency about of the scale of the problem are crucial steps toward a solution.

Note: For completeness, the additional £1.8 billion for DH in 2016/17 ranks as the 20th largest real-terms increase since 1975/76 in value rather than percentage terms. Additionally, for revenue alone this year’s increase ranks as the 31st biggest since 1972/73. Although these are technically correct, we recommend using percentage terms as explained above.

This blog was co-authored by John Appleby and Adam Roberts, Head of Economics at the Health Foundation.

How is the NHS performing? February 2016: Quarterly Monitoring Report

The latest quarterly monitoring report from The King's Fund finds that more than two thirds of trusts (67 per cent) and 9 out of 10 (89 per cent) acute hospitals are forecasting a deficit at the end of 2015/16.
Blog

John Appleby looks at how much we would need to spend on health to close the spending gap between the United Kingdom and other EU and OECD countries.

Waiting times in accident and emergency (A&E) departments are a key measure of how the NHS is performing. In recent years, patients have been waiting longer in A&E; here we look at why that is.

The NHS productivity challenge: Experience from the front line

This report describes how six trusts have been grappling with the productivity challenge. It also suggests ways to divert the NHS and social care from their current trajectory, which is heading towards a major crisis.
Report

Financial failure in the NHS: What causes it and how best to manage it

We explore the current financial state of the NHS, the approaches used to avert financial failure and how to deal with it once it occurs.

Do these figures take into account repayments made by NH Trusts for PFI?

I would also say that you have described the 28th position incorrectly... It is the 28th 'smallest' .....

Where do the figures come from for your chart? Can I see the data please??

Are there figures available which show the spending on medical services supplied directly to patients compared to administrative post costs over the last 15-20 years? (Including time given by doctors doing additional administrative roles for part of their time?)
Is there a chart available somewhere with NHS data on expenditure since 1948? I understand the expenditure in gross terms doubled every decade, irrespective of political party in power, except the period 1997-2010 when it tripled. Is that true?
Hi Gill: Yes, I will talk to my web colleagues about adding a chronological chart.

Hi Kevin: No, the data is just for England (Jeremy Hunt's responsibility and the subject of his original claim)
Does the DH budget include a component for NHS services in Scotland and Wales?
Would it be possible to see the chart in chronological order so we can see changes over time?
Thank you for this analysis and explanation.