Improving patient experience is an ongoing concern in health systems around the world, as it represents a key measurable dimension of high-quality care. The King's Fund’s contemporary work on patient experience highlights areas in which systemic and cultural change can be implemented to empower and involve patients in their own care.

Historically, the Fund has also conducted work focusing on smaller, frontline changes to improve patient experience. This work has touched on a wide range of factors affecting patient experience, from hospital food to enriching hospital environments with art to hospital bed design.

In 1956, The King's Fund granted financial support to an inquiry into the issue of noise in hospitals. This arose out of the Fund’s hospital inspection scheme, which noted a marked increase in noise; 'noise in wards' being one of the assessment criteria that inspectors were asked to consider, after it was identified as a particular source of distress and disruption for patients. The resulting 1958 report, Noise control in hospitals, depicted noise as a thoroughly modern malaise: 'that the world is growing noisier is obvious to us all; towns, roads, buildings and even hospitals are all noisier than ever before.'

The King’s Fund inquiry into noise in hospitals was based on the findings of surveys distributed to more than 2,000 patients in English hospitals and was repeated in follow-up surveys carried out in 1960 and 1973. These surveys provide an interesting insight into shifts in culture and public attitudes towards noise.

Earlier surveys cited 'cats, jackdaws, tugs on the river, and even a rifle range' as sources of disturbance, while the 1960 survey found that road traffic had become the biggest single cause of complaint. Just a decade later, the din of road traffic had become part of the everyday aural landscape and this was reflected in a drop in complaints about traffic in the 1973 survey. The growth of television and radio as popular forms of mass entertainment was also reflected in the rise of complaints about 'raucous blaring', leading one patient to suggest that 'radios be held to the ear and not laid on bed'.

The recommendations that came out of The King's Fund’s inquiry also show the impact of technological and design changes on noise reduction in hospitals. In the patient surveys, hospital equipment was often reported as a cause of noise heard on wards, with metal trays rattling on trolleys, squeaking trolley wheels, slamming hospital doors and dripping taps forming the backdrop that inpatients ate, slept and woke to.

Many of the Fund’s reports advocated the use of plastic and rubber elements, fittings and equipment to dampen unnecessary sound on the wards. The rise of modern domestic innovations, such as electric vacuum cleaners, may have proven to be a great convenience at home, but this was felt to be rather the opposite for patients in hospitals – one patient reported that the 'electric vacuum cleaner made me feel like screaming'.

In an effort to demonstrate how easily small fixes could reduce hospital noise, The King's Fund commissioned the cartoonist and former Punch editor, Fougasse, to produce a series of informative posters aimed at hospital staff. Fougasse was known for designing celebrated public information posters such as the Careless talk cost lives series and London Transport posters, and the images he created for the Fund were in his inimitable style with red borders, distinctive handwritten slogans ('Clatter does matter') and humorous illustrations. Each poster depicted a key source of noise disturbance, as identified in the Fund’s research, in a pithy and succinct way. One poster focuses on the disturbance of a dripping tap, while another holds up lubricant oil as the wonder product to cure all rackets. 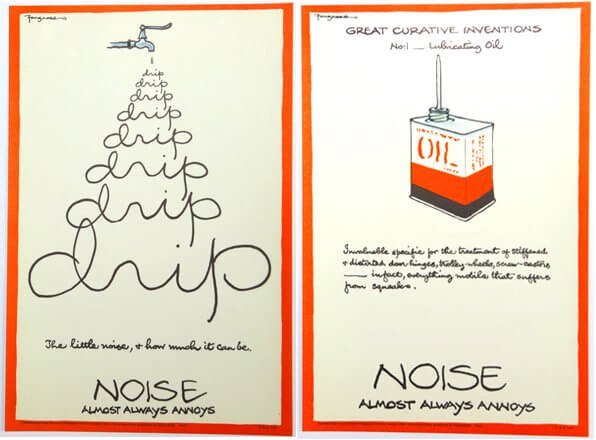 While all this talk of blaring televisions and cars may seem rather outdated, noise is still an issue for patients today. The results from the national 2014 NHS inpatient survey demonstrates this, with 39 per cent of respondents stating that they were 'bothered by noise at night from other patients' and 21 per cent being disturbed by hospital staff.

That noise is still an issue for patients today is unsurprising; as one respondent reported: 'the noises only disturb me when I do not feel well; at other times they do not disturb me at all.' We may not have referred to it as such in 1960, but continuous quality improvement has always been central to improving patient experience. As the Fund’s 1950s inquiry noted, 'noise-control is not something that can be achieved by an all-out attack over a short period of time; it is rather a matter of constant vigilance all the time'.

November 2000. Hip replacement. In hospital 7 days - no sleep. Nurses very noisy. Running up and down corridors, throwing water at each other. Shouting, laughing. The last night had ear plugs, dressing gown wrapped around head. The whole ward complained of this. Very noisy at nights if coming on the ward. Yet waiting a long time after pressing buzzer. I should have gone on for another stay for physio, but too tired.
Thank you for this! A very engaging read and I hadn't realised the history of recording noise in hospital goes back so far. As I reflect on how it was as a student nurse, compared to how it is now (some 30 years later), the one thing that strikes me is that hospitals are very much 24/7 places now and it is common place for people to be admitted or return to the ward after an operation in the middle of the night. As night time has become normal working hours for us in healthcare perhaps we should redouble our efforts to remember that night time is for sleeping for the vast majority of people. Talking quietly, lights out or dimmed (I remember doing rounds using a torch), tiptoeing around, and respecting peoples' need for more than 40 winks should be the priority for all working at night. Yes we can offer ear plugs and eye-masks but we can be proactively quiet in our night time working too!

‘Waits for hospital treatment were already rising before Covid-19. But the pandemic has pushed NHS waiting lists to record levels and laid bare the deep health inequalities in England', says Siva Anandaciva, Chief Analyst at The King's Fund.
Press release

'These latest findings, from one of the largest national patient surveys, show patient experience in hospitals is holding up remarkably well and has even seen some improvements since last year particularly around communication between staff and patients.'
Blog

We should see acute hospitals as places for healing

Jocelyn Cornwell explores how vulnerable patients can feel in hospital and argues that the quality of relational care should be given the same priority as clinical quality and patient safety.