In celebration of World Art Day, we take a look back through The King’s Fund library and archive collection to reflect on the Fund's history of commissioning works of art for hospitals.

There is growing evidence to support the widely held belief that art can influence the health and wellbeing of patients and staff in health care settings. The practice of decorating hospitals with paintings, sculptures and murals has a long history. From the medieval period with its religious and spiritually themed works, to the philanthropic endeavours of the artists of the 18th and 19th centuries, the use of visual arts in hospitals has evolved over time.

In the first half of the 20th century, new hospital buildings began to focus on a more medicalised approach to care and little or no art was placed in hospitals during this time. This decorative blight continued through to the 1960s, until which time ‘hospitals, wards and patients had to suffer environments in which colour and decoration were taboo’.

Various art-in-hospital schemes – such as the Paintings in Hospitals loan scheme – came into existence during the mid-20th century. However, there was no ‘central initiative to brighten with pictures the other dreary buildings of the NHS’. So in 1979, The King’s Fund established the Murals for Hospital Decoration scheme, later known as the Art in Hospitals scheme, to commission young artists to paint murals for NHS buildings in Greater London. The scheme was jointly financed with the Greater London Association of the Arts Council and administered by the Public Art Development Trust.

One of the first applications for funding under the scheme was from St Charles’s Hospital, West London. Although the hospital already subscribed to the Paintings in Hospitals scheme, staff wanted to install further decoration to ‘compensate for great corridors with dirty paint and gloomy Victorian interiors’. The artist Michael Ginsborg created a mural in the entrance hall of the hospital, an abstract design of ‘blocks of sympathetic colour decorating the whole foyer, in subtle but strong shades’. 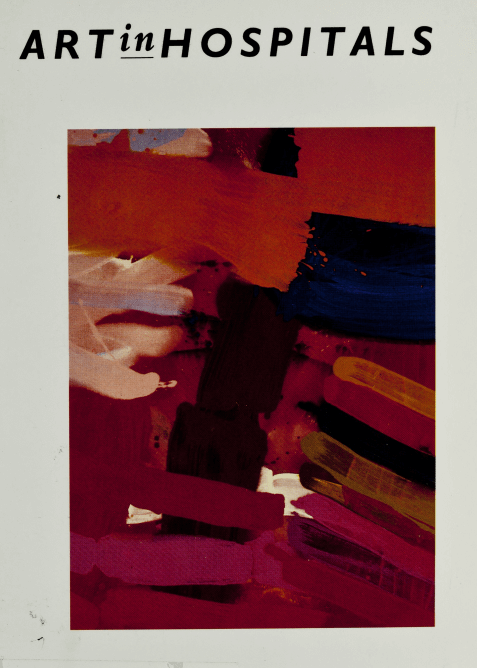 The Art in Hospitals scheme, like the Fund’s other grant-giving schemes at the time, was established to provide funding for projects that the NHS couldn’t pay for itself. In the first year of the scheme, The King’s Fund contributed £8,750 towards artist fees and materials. It continued to fund projects through the 1980s, with additional support from the London Arts Board. By 1989, 10 years after the scheme was established, the Fund had supported more than 40 projects – for a number of hospitals including Charing Cross, the Royal London, St George’s, St Stephen’s, Royal Free and St Thomas’s – with around £20,000 a year invested in arts-related projects.

Over the following decade, the Fund continued to expand its support for art in health care. In 1989, it launched a series of King’s Fund prints: the art historian and curator Richard Cork commissioned six artists including Richard Long, Anish Kapoor and Bruce McLean, to produce limited edition prints for sale to NHS hospitals, and a set was donated to the Tate Gallery for inclusion in the national collection of modern art.

In another project, The King’s Fund worked with The Forbes Trust to fund a sculpture residency at St John’s Hospice, Lancaster. The residency, which saw two artists creating their work within a hospice environment, was believed to be first project of its kind. When the residency was assessed, the evaluators were interested in examining all possibilities: from art being potentially disruptive to art as effective therapy. They wanted to determine whether or not the art was considered beneficial by the patients, staff and volunteers. They concluded that ‘the residency greatly benefited a number of people and the signs point to the effects being long-lasting’.

Many hospitals recognised the range of benefits that artists could bring to the hospital environment and were interested in establishing their own art commissioning programmes, but needed help to do so. In response to this, The King’s Fund and Lesley Greene, director at the Public Art Development Trust, published guidelines in 1989 that provided several recommendations based on 10 years’ of expertise in commissioning art projects. The guidelines provided support to hospitals that wished to commission art independently.

The Art in Hospitals scheme continued for more than 20 years and illustrated the Fund’s commitment to promoting good practice and innovation in all aspects of health care. The legacy of this work can be seen in subsequent programmes such as Enhancing the Healing Environment, which not only provided strong evidence of the therapeutic impact of good design, but also encouraged more widespread use of the arts within hospital settings.

To find out more about The King’s Fund’s work in commissioning art for hospitals, visit our digital archive.

My late husband has a large collection of his work and I would like to hang some in hospitals or care homes. How do I go about this?
I am looking for some art work to borrow for a period of time to enhance the environment of both patients and staff. We are a very challenged organisation and operating in a demographic which has large pockets of poverty and deprivation.
Is this something you can help me with - bearing in mind we have no funding for this so are looking for a no cost option if possible.
I have a body of work which is just about to be created touching upon mental health and challenging the way in which is dealt with - please can you contact me on the above email for further details - my practice is currently based within Hackney and specifically Stoke Newington - is estimate it will be complete by mid November - it would be useful to know the dimensions you were hoping to fill.
Best

I have just found your message on Art in Hospitals and wondered if you are still looking for art? I have a selection of art you are welcome to display and could email you with pictures and details/sizes if you are interested. All my art is framed and ready to hang. I live in Essex and could deliver.

Are there any funds we can apply for to buy some art therapy time for our stroke ward? We have an art therapist who gives one afternoon a week voluntarily but we would like to help her expand the service she offers and have art available to more patients.

Thank you for any advice you can give,

we are hoping to set up an art comittee here at Manchester foundation trust. This will offer art and creatitivity to our patients. I am lookong for ideas for creative bags for patients and ideas for workshops and volunteers to help with this fantadtic oppurtunity.

Hi,
I am PhD Art graduated, self employed artist and Art therapist I am also a member of Hillingdon Artists.

I would like to do Art work shop for health and wellbeing in Hospitals or any health centre, and would love to do one free session as a taster. I also would love to come and have a discussion if you are interested in going forward. Please contact me if you like to hear about my project and and further . I can do fund raising project by setting up workshop and get a50% of the benefit and dedicate the rest to your organisation. I do looking forward to hearing from you.

Hi,
I work on a Child and Adolescent Mental Health inpatient ward. we would really love a large painted mural on the wall in our therapy room, to encourage more therapeutic approach and intervention, and remove the white wall feeling.
does anyone know artists or charities which may do this for free if the materials were provided?
many thanks

I have been painting for 30 years and I would like to donate some of my pictures to local hospitals.

I recommend you get in touch with the charity Paintings in Hospitals. You can visit their website here: https://www.paintingsinhospitals.org.uk/.