The NHS five year forward view has generated both debate and action, most of which has been about the push for new models of care, exemplified by the vanguard programme. But it is the second chapter of the Forward View that is truly radical. This sets out a vision of an NHS less focused on simply treating people and more focused on prevention and supporting people and communities to create the conditions for better health.

Behind the scenes, NHS England has been quietly developing its work on prevention through programmes such as Realising the value, and now, through more work on a ‘social movement for health’. But while these initiatives are welcome, we are in danger of missing the quiet force for change that is volunteering in health and care.

Our work and that of others over the past few years has documented the diversity and scope of volunteering in the NHS and health and care more broadly. The Citizenship Survey in particular brought to light the fact that almost three million of us in England regularly volunteer for ‘health, welfare and disability organisations’ – as many people as are employed by the NHS and social care sector combined.

To understand more about volunteering in health and social care, we included two questions in NatCen Social Research’s 2015 British Social Attitudes (BSA) survey – a representative survey of the British population aged 18 and older who are living in private households. Our questions are more specific than those in the Citizenship Survey, as the latter covers health within a wider definition of volunteering – and due to the richness of the BSA data, the questions allow us to explore ‘who volunteers are’. 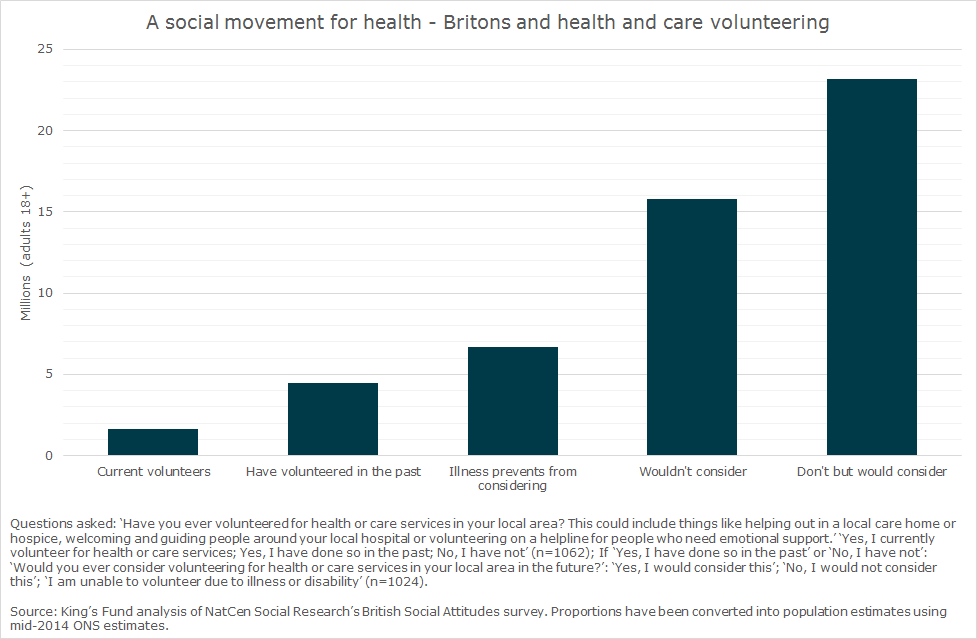 Further analysis suggests that current female volunteers outnumber male volunteers by almost three to one, and more than two to one in terms of previous health volunteering. Adults aged 65 and over are significantly more likely to volunteer than younger age groups. But this was the limit for significance on a wide range of variables. Age and gender divides are important, but with the exception of these factors current volunteers are as diverse as the British population.

Our second question asked those who weren’t current health and care volunteers whether they would consider becoming so, to which half of respondents answered that they would. Scaling up to the entire population aged 18 and older means around 24 million British adults would at least consider volunteering for health, 16.4 million would not, and 6.7 million could not due to health reasons (see Figure).

Gender didn’t play a role in explaining responses to our second question – men are as likely as women to consider volunteering. However illness and disability are clearly important factors, with millions potentially ruled out of volunteering. There are indications that illness and disability may be particularly important for some groups in affecting ability to volunteer, for example those on low incomes, though more robust analysis is required to confirm this further.

So where does this leave us? First, we already have the ‘social movement for health’ that NHS England is aiming for – the 1.7 million people currently volunteering in health. Let’s therefore celebrate, value and make more of what we already have alongside seeking to do more. Second, there is an untapped pool of potential resource to develop this further – half the adult population would consider health volunteering if asked. What amazing transformative potential those people hold for health and care – even if only some of this potential is translated into action. The NHS and its leaders need to convert this goodwill and potential into reality. Finally, we need to find better ways to help those living with illness and disability – the NHS’s core customers – to give something back in terms of volunteering, if they wish to, in ways that make sense for them and fit with their lives.

We are soon starting a new project on the scale, scope and value of volunteering in general practice, so keep an eye out for this on our website.

Volunteering in health and care: Securing a sustainable future

Our report looks at the important part that volunteers play in improving patient experience, addressing health inequalities, and building a closer relationship between services and communities.
Slideshow

Chris Naylor, Fellow in Health Policy at The King's Fund, looks at the value of volunteering in health and social care, what it takes to get it right and the impact of the NHS reforms on volunteers.

Great idea for the Kings Fund to study volunteering in Primary Care. The need for the Kings Fund to focus on the use of volunteers to improve "Dr- Patient Communication" has never been more important with sometimes 20 languages being spoken in some GP practices by the patients see: http://librariesandhealth.com/
The only way forward for a cash strapped NHS is to maximise the support from volunteers (who still needed funding to support them). GP surgeries depend on volunteers for community support, disease specific support groups, transport, patient participation groups, input to commissioning decisions and healthcare planning.

As noted three million people in England regularly volunteer within the health and social care sector. This is the same number as in paid employment in these organisations. (Mundle, Naylor and Buck Kings Fund 2013)

250 000 people put themselves forward to volunteer in the Olympic games. 70 000 people were selected and each worked at least 10 days in return for a chance to be part of the occasion, and benefits such as uniform, and local transport funding. Incentives can be low cost but are important as it the organisational support

Research from the Institute for Volunteering reported previously that the benefit to hospitals trusts of volunteers is worth £700 000 per year, and for primary care trusts £250 000 per year. (Kmietowicz, 2013) 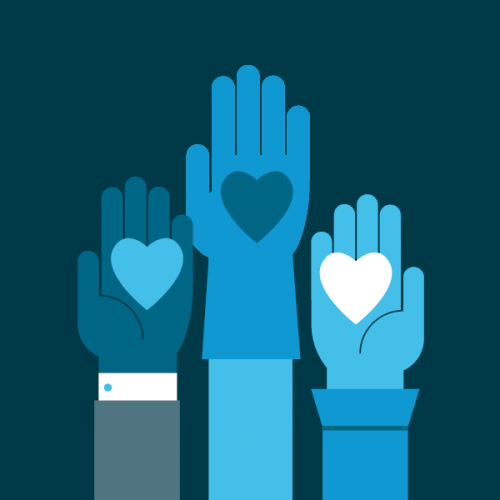 Volunteering during Covid-19: human connection in a global pandemic

Anna Charles sat down with Catherine Johnstone CBE, Chief Executive of the Royal Voluntary Service, to find out about volunteering during Covid-19, the NHS Volunteer Responders scheme and how we can ensure that widespread community engagement can last beyond the current crisis and into the long term.
Blog

The number of people stepping up to volunteer during the Covid-19 outbreak has hit the headlines, but what role are they playing? Helen Gilburt considers the how volunteers are supporting the current response and what that might mean for volunteering in the future.
Commissioned report

Commissioned by the Office for Civil Society, this report explores the role and value of volunteering within ambulance services in England and identifies examples of different ways in which volunteering opportunities are being developed.
Blog

Volunteers are involved in providing vital frontline care and support to ambulance services. Helen Gilburt explains how these roles are developing and diversifying to meet the wider needs of the NHS as a whole.