On 11 February NHS England published its Combined performance summary, which provided data on a number of key waiting times commitments. Here we take a closer look at the statistics on 18-weeks, diagnostics and A&E. What does the data tell us?

First, let’s consider the key news story that, for the first time since it was introduced, the NHS failed to meet the standard that at least 92 per cent of patients who are waiting for treatment should wait for less than 18 weeks. Perhaps just as important is that the declining trend in meeting this commitment has been gathering pace through this financial year, as becomes clear when we compare this year against the last (see Figure). 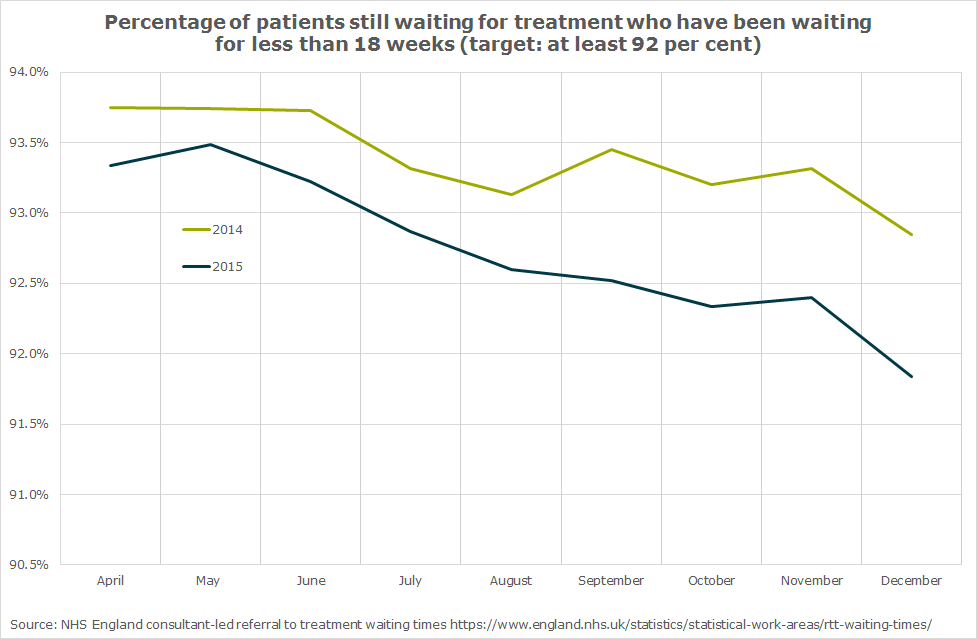 What is the reason for this deterioration? It has not been caused by the NHS treating fewer people; in the year to date, data releases from NHS England have shown significant increases in the number of first outpatient attendances – up 4 per cent over the past year – and elective treatments provided by the NHS (covering both day case treatment and inpatients) – up 3.8 per cent over the past year. Similarly, the number of diagnostic tests carried out in the year to December has risen by 5.6 per cent.

How do we square the circle between declining waiting time performance with significant increases in the number of people being treated? The key driver is likely to be demand, as GP referrals to hospital for the year to date have risen by an uncomfortably fast 4.7 per cent. ‘Other’ referrals – which includes referrals between consultants – is also strongly up, seeing 6 per cent growth. This underlines the challenge facing the NHS as a whole: with demand rising at this rate, the NHS has to ratchet up activity just to maintain waiting times. With the Spending Review providing the barest of increases in real-terms spending power up until 2020/21, this demand growth has to be met out of rising efficiency. The faster the growth in demand, the higher the efficiencies required to meet it out of (roughly) constant spending.

Finally, looking at waiting times in A&E, the NHS in December again missed the target with performance dipping to 86.6 per cent of patients in major A&Es (‘Type 1’ units) waiting less than four hours and 91 per cent overall. However, it is important to note that this is better than December 2014, where the respective numbers were 84.8 per cent and 89.9 per cent. If this does not sound terribly impressive, we have to remember the significant challenges the NHS has had to deal with on urgent and emergency care.

Performance against the A&E target is especially sensitive to the number of patients waiting to be admitted to a hospital bed. With this in mind, we need to note that the total number of emergency admissions rose in December 2015 when compared to a year earlier (by somewhere between 0.7 per cent and 2.3 per cent depending upon the data source). With more people arriving at hospital needing emergency admission, hospitals also struggled to discharge them promptly at the end of their stay. Delayed discharges rose significantly, whether measured by the number of patients delayed (up 11.9 per cent) or the number of days lost in delayed discharge (up 10.8 per cent) when compared to December last year. With rising numbers of cases and increasing difficulties in discharging patients, it is more remarkable that the NHS managed to improve performance when compared to this time last year.

What is striking from these numbers is that the increase in demand is apparent in all acute pathways. If data was available on mental health, community services and primary care on the same basis, the suspicion must be that we’d see the same pattern repeated across the NHS. With the Carter Review directing attention to efficiency savings in the NHS, it is just as important to remember the significance of rising demand. If the NHS cannot find a way to moderate the influx of new patients, then it must find the capacity to treat them – either by releasing efficiencies or by spending more.

Our quarterly monitoring reports provide a regular update on how the NHS in England is performing. We examinethe views of finance directors on the productivity challenge they face, as well as key NHS performance data.
Completed project

By setting out how much funding will be available up to 2019/20, the Spending Review has defined thecontext in which health and care services are delivered for the rest of the parliament.

Veena Raleigh examines trends in life expectancy at birth up to 2020 and the impact of Covid-19 in2020, gender differences, inequalities, causes of the changing trends since 2011, and how the UK’s life expectancy compares with other countries.
Blog

The current rhetoric from ministers is that waits for elective care will ‘get worse before they get better’.But what will the ‘better’ part of ‘build back better’ look like for elective care?
Press release

Finding it difficult to visualise the size of the elective care challenge facing the NHS? Deborah Ward explainshow big ‘big’ really is.