Next month the government will set out its plans for public service spending through to 2020. The indications are that the plans will be a rerun of the 2010 Spending Review. The overall aim – as in 2010 – will be to eliminate the public spending deficit and reduce government debt as a proportion of GDP. Once again, large (25–40 per cent) real cuts are expected for most departments. And, as in 2010, NHS spending will be protected.

But the protection is relative and the decade since the 2010 Spending Review will be the toughest financially since the inception of the NHS.

Looking at the NHS across the whole of the United Kingdom allows analysis of spending as a share of national wealth as measured by GDP. It also makes it easier to make comparisons with other countries’ spending.

Over the past parliament the annual average real increase in UK NHS spending was 0.84 per cent (Figure 1). This is the smallest increase in spending for any political party’s period in office since the second world war and amounts to around a quarter of the long-run average increase in funding since 1951.

While next month’s Spending Review will reveal the actual size of the real cuts most of Whitehall has been modelling, we already know more or less what the NHS will get. For the NHS in England (around 83 per cent of the UK NHS in spending terms) the government has made it clear that spending will rise by £8 billion by 2020/21 – although it remains unclear how this increase will be phased. (The oft quoted increase of £10 billion includes the real increase in this year’s budget).

It will be for Scotland, Wales and Northern Ireland to decide spending on their health services, but assuming they increase their health budgets in line with England’s then the increase in real spending to 2020/21 could average almost 1.75 per cent per year. This is twice the average over the last Spending Review period, but still the lowest of any parties’ time in office and less than half the long-run average. 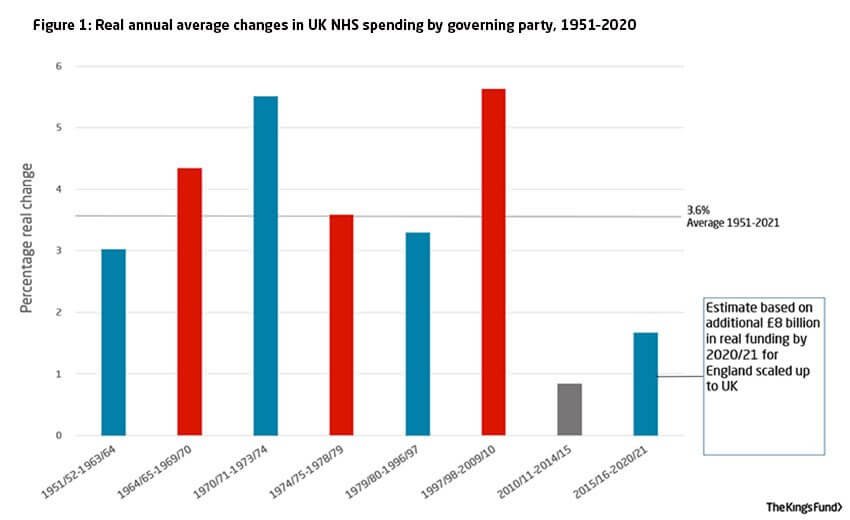 Cutting up historic and planned spending by decade emphasises the scale of the funding squeeze historically (Figure 2). On current plans and assumptions, real spending between 2010/11 and 2020/21 will increase by just 1.3 per cent per year on average compared to the long-run average of 3.6 per cent. 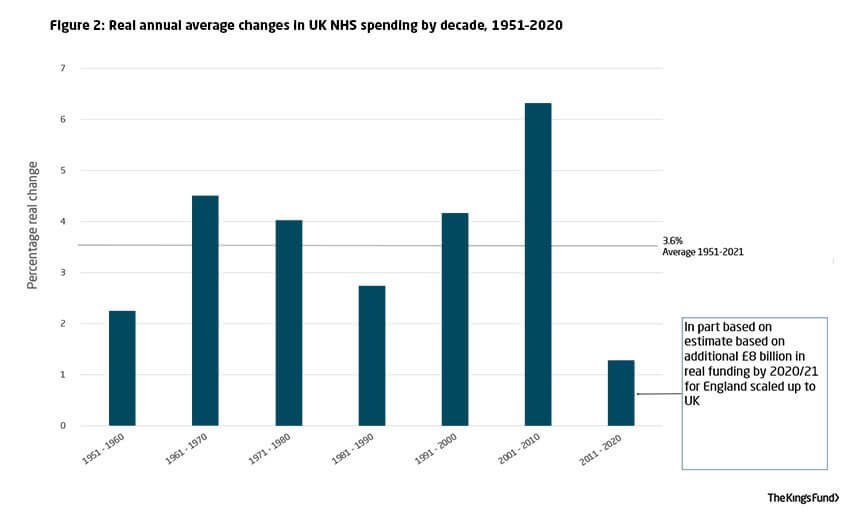 Although health spending will grow, growth in the economy as a whole will almost certainly outstrip the relatively small real-terms increase pencilled in for the NHS. Between 2009/10 and 2020/21 the UK GDP is forecast to increase in real terms by more than a quarter. But NHS spending across the United Kingdom will have risen by around 15 per cent.

As Figure 3 shows, the ten years up to 2020/21 are likely to see the largest sustained fall in NHS spending as a share of GDP in any period since 1951. Even as the ‘cake’ is growing, we will devote a smaller slice of it to health care. The reduction of around 0.7 percentage points of GDP would take spending as a share of GDP back to the level in 2008/9 and represent a loss of around £14 billion in today’s prices. 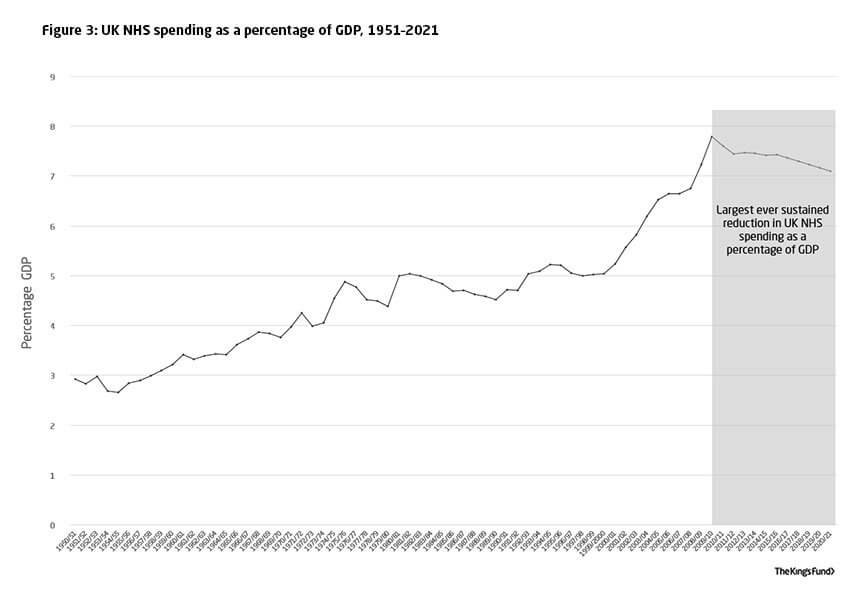 Internationally too, health care spending in the United Kingdom as a share of GDP is slipping backwards. Although UK health care spending rose in real terms between 2009 and 2013, the economy expanded faster – reducing health care’s share of GDP. Compared to others, the United Kingdom has slipped further into the bottom half of the Organisation for Economic Co-operation and Development (OECD) health spending league – overtaken by Finland and Slovenia (Figure 4).

It is clear from both the historical record and international comparisons that health spending in the United Kingdom could hardly be considered profligate – yet it is now set to reduce further as a share of our expanding national wealth. 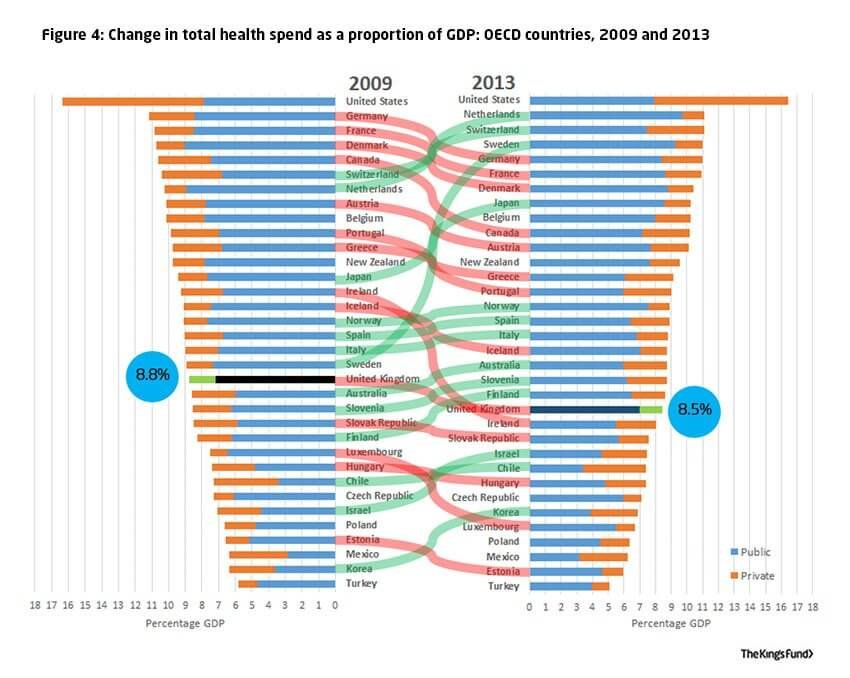 Once again the challenge for the NHS will be to squeeze more health care out of every pound. But as our latest QMR survey (published this week) will once again show, the overwhelming majority of NHS finance directors are sceptical about the chances of the NHS delivering the required productivity gains over the next five years. And forecasts of providers overspending this year by more than £2 billion in England suggest the NHS has reached the end of the productivity road in the short-term.

The huge overspend NHS providers recorded in the first quarter of this year was due neither to a lack of reform nor a reluctance to reduce waste and improve productivity. Increases in spending are increasingly falling behind increases in demand and costs, as well as the NHS’ ability in the short-term at least to make ends meet through productivity improvements. As a result the NHS is struggling to meet its obligations to patients. Headline waiting times standards for cancer and in emergency departments, for example, are now missed routinely, the target minimum wait for diagnostic tests has not been met for the past 18 months, and though now abandoned, the admitted elective waiting time target was missed in 14 of the past 18 months.

If this is the situation as we come to the end of the 2010 Spending Review period, what will be the position in another five years?

The King's Fund's submission to the 2015 Spending Review argues that if the government is serious in its commitment to health and social care, it must ensure that adequate funds are available both in this parliament and longer term.
Active project

It's well looking up Jeremy Hunt past, having no qualifications in the medical profession, and like the rest of the Conservative Party slowly fragmenting "OUR NHS" my own GP practice is stretched to its limit, my previous GP has stated he would never return to the profession, the reason for the severe back door cuts is to create a situation where the public will eventually welcome with open arms privatisation merely to get an appointment to see a GP, which incidentally you will have to pay for them, not forgetting the remuneration certain civil servants will receive. Having worked all my life, paid all my NI contributions, now find myself waiting almost 5 weeks to see my GP. My dental practice is also on the verge of collapse, the two senior partners have retired, as has my dentist, who handed a notice in five months ago, and there is still no replacement. Just remember it's no good complaining as I am doing, we must all take action before it's too late.
If we weren't paying 50billion a year in debt interest , we might be able to spend more on the NHS and other services, add to that the billions we pay to prop up the EU !!
So, so far in the official records, *there have been no NHS cuts*.

All you can do is forecast there will be 'cuts' (a reduction in GDP% isn't necessarily a cut).

hi jojn appleby
i read above qoute for public health and agreed with david sandbatch.thanks
I do not want more money spent on a National Sickness Service.

I want cash spent on preventing healthy people getting sick in the first place. More healthy people less hassle getting into hospital when I need to.
For the first half of its existence the NHS was not cash limited. John's graphs show that this did not lead to an infinite acceleration of spending. Far from it. Since the introduction of NHS cash limits, successive Governments have sooner or later responded to the evidence of steadily growing demand on the NHS. There was a feedback mechanism that eventually worked. The feedback mechanism appears blocked in the short term. But I cling to the belief that as more and more hard evidence of demand exceeding NHS supply nationwide accumulates, that pressure will lead eventually to a resumption of realistic growth in health care spending. The key is to keep piling up that hard evidence (I hope).
The U.K. is certainly slipping backwards in its funding of the NHS as the economy picks up/grows again. As well as our GDP % on health, our notional spending per capita has also reduced or stagnated. This is a result of deliberate govt. austerity measures that have barely allowed for inflation let alone increased demand. Yet deficits are patchy and uneven over the whole country (as the recent Heath Foundation report has shown) and this raises the issues of both funding insufficiency as well as efficiencies. Is this attributable to an ageing population as Max Yates suggests or is it case- mix or socio-economic circumstances etc? Certainly in the East of England, where the deficits are the worst, the evidence is mixed with some of the biggest hospitals now under special measures, the age distribution not especially worse than the rest of the country and the social- demographics reasonably affluent cf. the much more deprived north of England. So what's happening on the ground where these deficits exist ? The Kings Fund is right to point these trends out but much deeper analysis at the sub-national level is now required.
Increasing variation across the system in the quality of care being delivered and the effectiveness of how trusts spend their budgets is a concern. System reform needs to be properly scoped out, costed and planned rather than just being imposed (and rushed) from the top down. This suggests a sense of panic behind the scenes. Surely it would be sensible to concentrate on stabilising current provision rather than introducing further stress into the system? The current focus is misguided in that social care still seems to be a lower priority issue, which if addressed arguably could have a greater impact, rather than rushing through a move to a 7 day service, for example. Is there any analysis on the amount spent on Social Care and the funding gap to meet the future demand?
The graph showing GDP spending share on health is interesting. However, with demand for health care and resources rising particularly for older people what would happen to the graph if it was aged adjusted for those older than 50 years old or if older age brackets are used?
http://www.commonwealthfund.org/publications/issue-briefs/2015/oct/us-health-care-from-a-global-perspective

The money will not come from integration with Social care , will it?
See Exhibit 8 of the commonwealth Fund document.