The Cancer Drugs Fund (CDF), initially set up in 2010 with a budget of £50 million, increased to £200 million in subsequent years, was designed to give certain NHS cancer patients towards the end of their lives access to drugs not approved by NICE. While it is almost certain to have benefited some people, setting priorities for NHS spending in this way raises some very tricky ethical (and economic) issues.

The CDF was originally envisaged as a temporary measure until a new method for determining priorities for drug funding was introduced. The failure to develop alternative drug funding criteria has meant that the CDF has not only continued but – as recently announced – has also been extended for a further two years with enhanced funding to £280 million a year (see figure 1). By 2016, more than £1 billion will have been spent via the CDF. 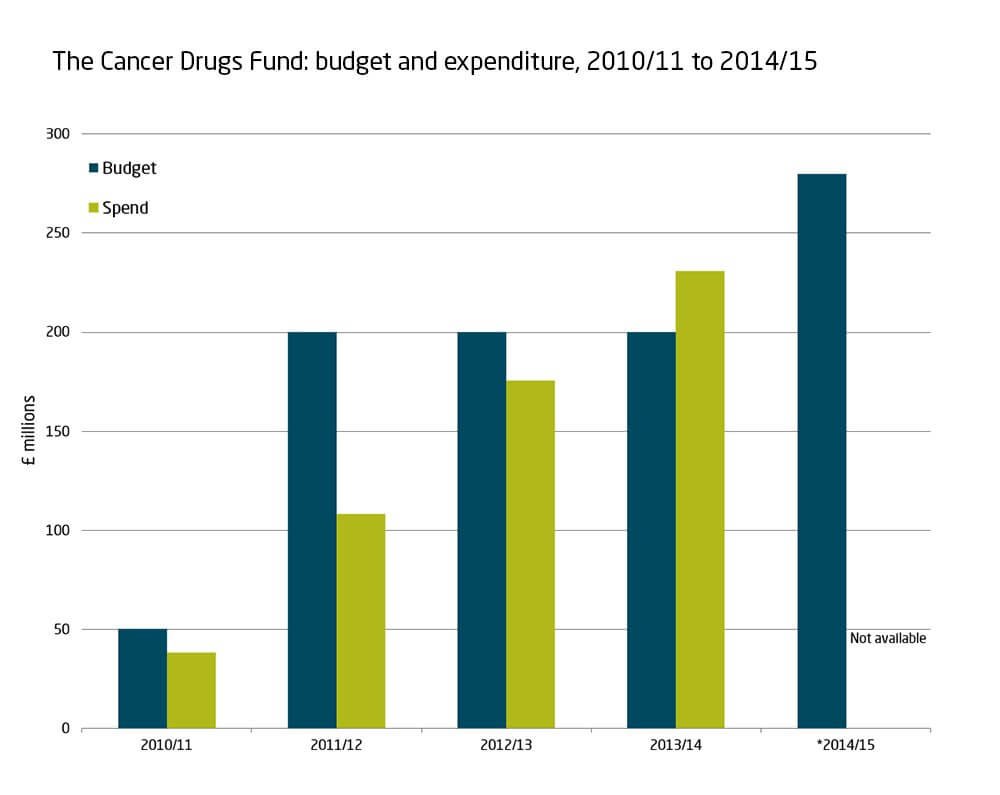 Accessing the CDF is based on clinical recommendations and is limited to certain patients in a terminal state. So far around 55,000 people have, as the Department of Health put it, benefited from the CDF (see figure 2). However, the organisation with the job of collecting data on the impacts of drugs supplied under the CDF – the Chemotherapy Intelligence Unit in Oxford – has yet to report on its analysis. On the face of it, the CDF would seem perhaps to be a good thing, helping improve the quality of life for people at the end of their lives. But is it either a fair or efficient way for the NHS to spend its limited budget? 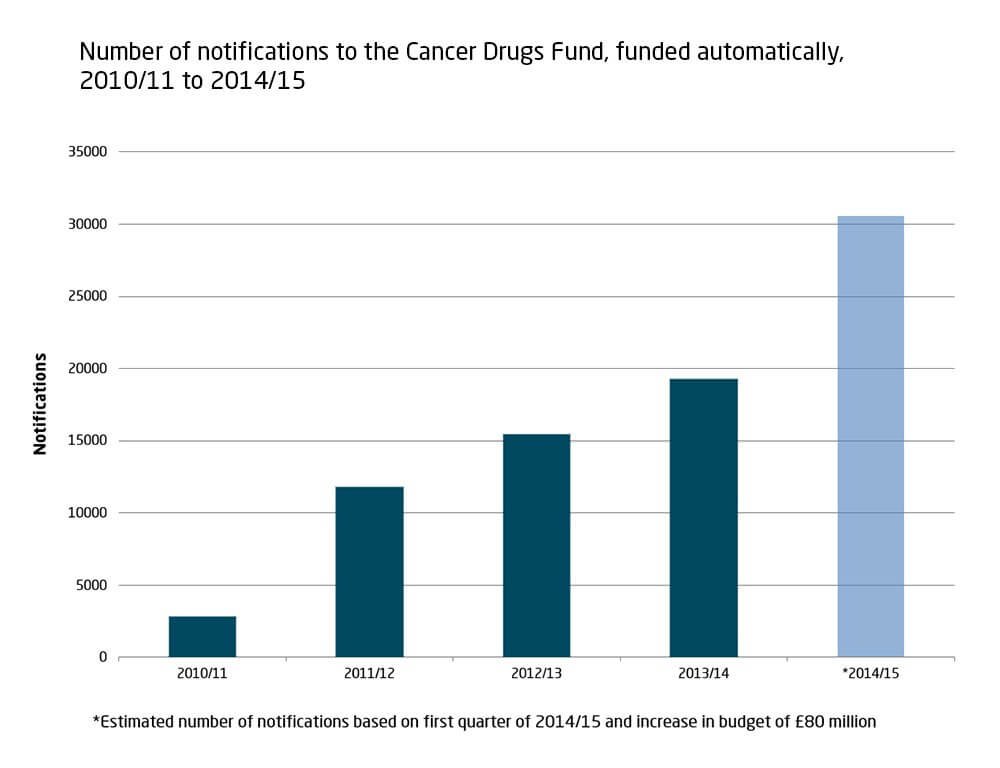 The latest data show that the CDF enabled access to 41 cancer drugs for a range of certain indications. Just four drugs – Bevacizumab, Abiraterone, Bendamustine and Cetuximab – account for nearly 53 per cent of all patient notifications (requests) to the CDF (see figure 3). Most of the drugs accessed under the CDF have been examined by NICE – and, by definition, rejected for the indications accepted by the CDF on the grounds that they do not reach NICE’s threshold cost-effectiveness level due to a combination of low effectiveness and high cost. 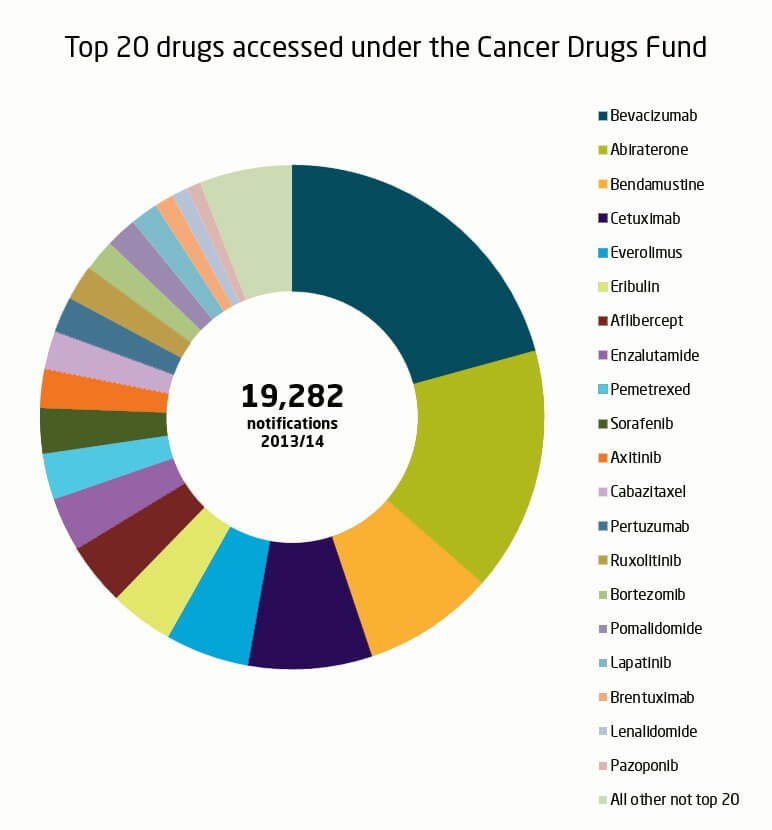 The funding of drugs rejected by NICE raises a fundamental ethical dilemma: should certain NHS patients’ lives be valued more highly than others? In effect, the CDF undermines the underlying NICE/NHS principle that all lives are of equal value regardless of disease or any other patient characteristic. Does this matter? Well, perhaps not if such a priority reflects society’s opinion. But in the absence of a debate and agreement about what weight to give to the equity implications of NHS spending, the ethical basis of the CDF must remain arbitrary at best.

The corollary of this is that the true (but hidden) cost of the CDF is not the £280 million financial value of the fund itself, but rather the value of the forgone benefits (lives saved, pain averted, QALYs gained etc) if the money had been spent on other patients. It is a sum difficult to calculate but nonetheless certainly higher than the simple financial costs of the CDF.

Along with this wicked equity problem, there is also a problem concerning efficiency. Faced with the possibility that their drug may fail NICE’s threshold, a manufacturer could, within limits, seek to reduce production costs and/or decide to trade off some profit against a lower price (and hence better cost-effectiveness in the eyes of NICE) to meet NICE’s approval criteria. But the CDF attenuates these incentives to maximise productive efficiency and minimise prices. It creates a moral hazard and has introduced a perverse incentive for drug manufacturers. Nearly half of all patient notifications to the fund are for drugs supplied by three manufacturers: Roche, Janssen and Novartis (see figure 4).

Figure 4: Pharmaceutical manufacturers’ share of notifications to the Cancer Drugs Fund (based on manufacturer of drugs requested), 2013/14 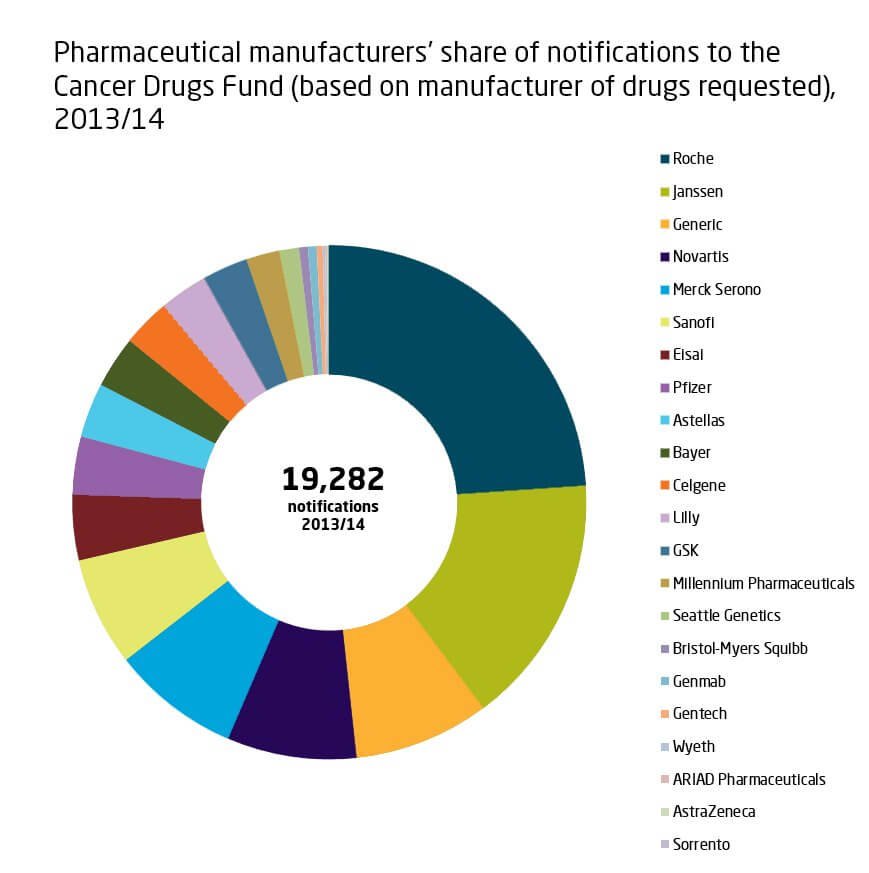 Professor Peter Clarke, the chair of the CDF, has recently suggested a review to develop ‘options for ensuring greater alignment between CDF and NICE assessment processes’. This may go some way to reducing some of these problems. But surely, the obvious solution is to abolish the CDF and let NICE make the decisions alongside all the other treatments it has to consider?

The Cancer Drugs Fund is not just for people with a terminal diagnosis. Its purpose is to provide drugs to any resident of England with a cancer diagnosis who cannot routinely access those drugs through the NHS. Although for some people this access might give the chance of a few extra months of life, for other people access may cure their cancer or extend their lives for years. There does need to be a debate about a sustainable way of funding cancer (and other) treatments in England, but to do so we have to have the right facts first. http://www.england.nhs.uk/ourwork/pe/cdf/
Interesting that evidence based medicine is only promoted when it comes to the use of CAM, but is forgotten when it comes to feeding toxic drugs into people.

Sorry graham you are wrong. If a company offers a price reduction to NICE they have to offer it to the CDF committee.
An excellent blog. My own (as yet unpublished) research indicates that public support for CDF is very limited. And it's good to draw attention to the fact that whereas NICE can negotiate a price reduction through Patient Access Schemes, CDF pays full price; and even if the company has offered a Patient Access Scheme to NICE and had it rejected, it's under no obligation to repeat the offer to CDF. It's likely that the spend would have been at least 10-15% lower if this were not the case.
This is a difficult issue which I thought the blog covered well. However, one aspect I would disagree with is the notion that without the CDF in place manufacturers would be more likely to reduce their prices and thus be more likely to receive a NICE approval. This assumes that before the CDF existed, cancer drugs were routinely approved by NICE, when this clearly was not the case and is one of the reasons it was created in the first place.

The CDF is not a sustainable solution and does raise difficult questions around why cancer drugs are prioritised over other diseases; however, the solution can't be just to go back to pre-CDF days and rely on NICE's appraisal process to give patients access to cancer medicines. The spotlight needs to be on both manufacturers and NICE to develop a solution where drugs are not priced at a level which would burden the NHS significantly and the way NICE evaluates cancer medicines is reformed to consider uncertainty in trial data, issues around measuring overall survival in cancer clinical trials and incremental innovation.
A fair, transparent approach is fundamental - the role of NICE is to evaluate all treatments against agreed criteria. The CDF is allowed to bypass this on the basis of emotionally appealing 'special cases'. Surely it would be fairer to use NICE but consider whether cost-effectiveness threshold differentials should be applied for defined conditions (I'm not arguing for this, just stating that it could be considered!)? One clear, transparent, equitable system!
I wonder though whether there was a political positioning aspect to the CDF: 'taking action for cancer sufferers when the NHS can't / won't afford treatments'?

‘The targets in this plan look ambitious, especially as the disruption caused by Covid-19 makes it hard to predict how many patients will need care in the coming months,' say Richard Murray, Chief Executive of The King's Fund.
Blog

David Buck and Toby Lewis consider the opportunities of NHS England’s new ‘Core20plus5’ approach to tackling health inequalities, and reflect on how the NHS begins to adapt its role and work more strongly with others to tackle the root causes as well as symptoms.
Press release

‘GPs report that they are working harder than ever, yet patients are finding it difficult to get an appointment – it is clear that something needs to be done,' says Beccy Baird, Senior Fellow at The King's Fund.