The White Paper Equity and excellence: Liberating the NHS sets out a significant set of reforms for the NHS over the coming years. As we do with all new major policy developments, The King's Fund will follow the evolution and implementation of these changes and assess their impact. As part of this evaluation we will collate and comment on key aspects of NHS performance, starting with hospital waiting times.

Reducing waiting lists and times has been a defining achievement of the NHS over the past decade. At their peak, more than one million people were waiting for inpatient care and even more for an outpatient appointment. In 1998, more than 380,000 were waiting for more than six months and 68,000 for more than a year to get into hospital. While half of all those on inpatient lists waited an average of 15.2 weeks in 1998, this has now fallen to just over four weeks.

Such successes have taken time. Following the guarantees on waiting times introduced by the Patients' Charter in 1991, waits of more than two years were reduced. By 1995 the guarantee was extended to a maximum wait for admission to hospital of 18 months. From 2000, progressively tougher targets were introduced, to reduce waiting times for inpatients and outpatients and then to reduce waits in other parts of the system, such as accident and emergency and general practice.

Despite these developments, waiting times targets remained somewhat piecemeal and arguably did not fully reflect patients' individual experience of waiting. However, in 2004 a more holistic target was introduced, setting an 18-week limit on total time between GP referral and treatment in outpatients (non-admitted care) or inpatients (admitted care).

Together with political and managerial will, extra money, resource and technical help, this target has driven the most recent, and significant, improvements in the speed of access to care. By June 2010 around 90 per cent of admitted patients and 98 per cent of non-admitted patients were being seen within 18 weeks.

Waiting targets and the coalition government

On 21 June 2010, as part of its drive to reduce bureaucracy and abolish targets with 'non-clinical justification', the coalition government announced that performance management of the 18-week waiting time target would cease with immediate effect.

Part of the rationale for this was that long maximum waiting times had been successfully addressed and that in future patient and GP choice will act as a key lever to keep waiting times low. But what will happen to waiting times now that targets are abolished? Routine data on waiting times is still being collected and we'll be using that to provide monthly updates on changes in waiting times for the English NHS.

Our tracker will cover the waiting times of patients still waiting, those who attended outpatients for treatment and those admitted into hospital as inpatients.

For outpatient and inpatient waiting times we will also track the median waiting time – the time waited by half of those either attending as outpatients or admitted from the waiting list as an inpatient.

Patients still on waiting lists waiting for more than 18 weeks 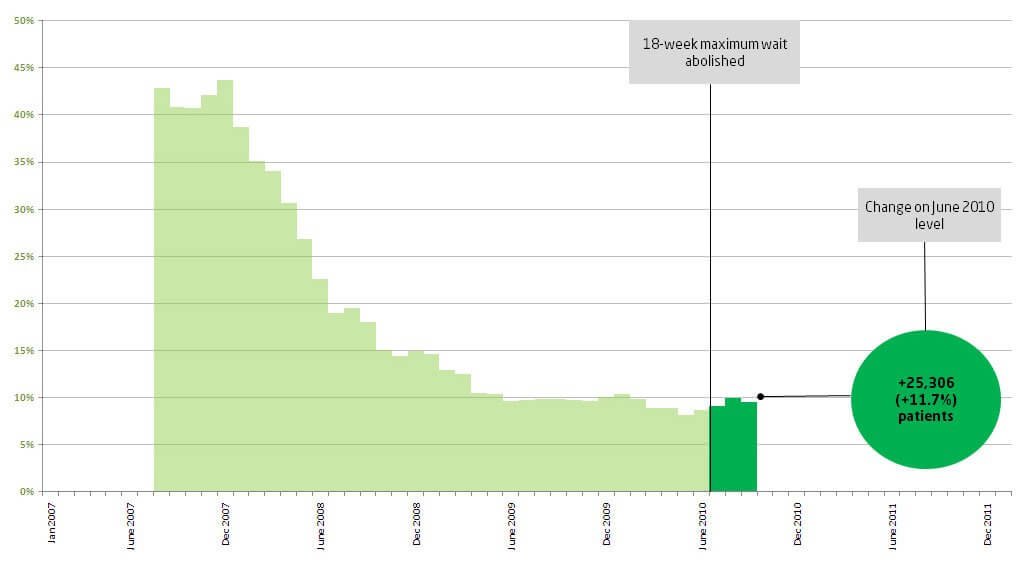 For patients still on waiting lists, the proportion waiting more than 18 weeks has remained fairly constant from around April 2009 to June 2010. The increase since June this year appears to be within the range of fluctuations over the previous year.

Patients treated in outpatients who waited more than18 weeks 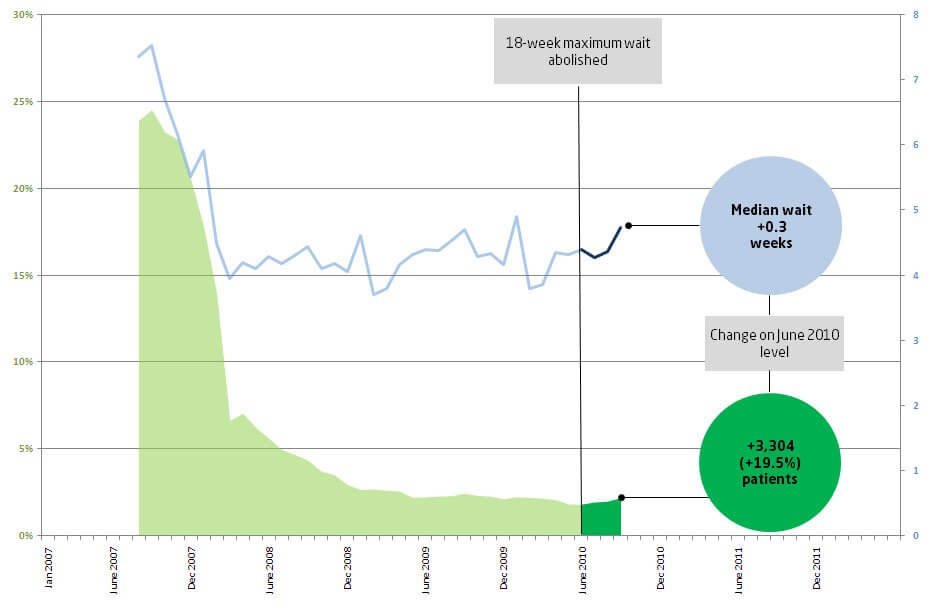 Similarly, for patients who have been treated in outpatients, the proportion that waited more than 18 weeks rose between June and September this year. However, it is too early to tell whether this is the start of a trend. Median waiting times also increased between August and September – from 4.4 to 4.7 weeks. However there may be possible seasonal effect. This is more noticeable with peaks in January and troughs in March, but also with smaller peaks in September. Further data should reveal whether this pattern continues.

Patients admitted as inpatients who waited more than 18 weeks 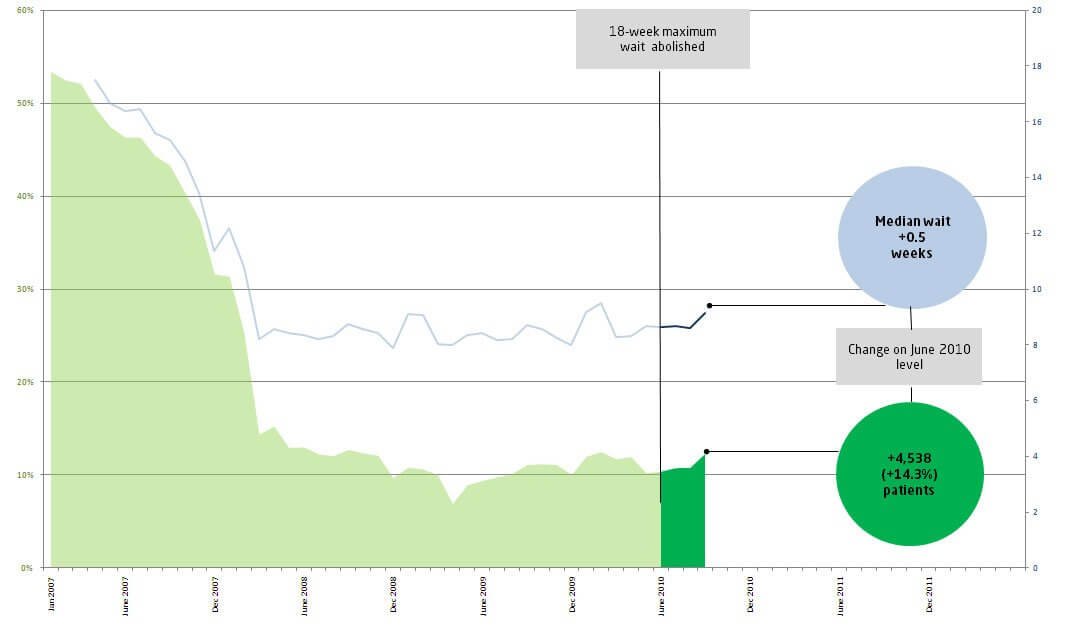 For patients admitted as inpatients, the proportion that had waited more than 18 weeks rose in September, but this change is within the fluctuations seen over the last two years. As with outpatients, median waiting times also rose in September, from 8.6 to 9.1 weeks. As with outpatients, there appears to be a seasonal effect, again most noticeable with peaks in January, but also smaller peaks in September. Further data should reveal whether this pattern continues.

This blog was co-authored by Tom Lyscom, former researcher at The King's Fund.

All graphs adapted from Department of Health: Referral to Treatment Waiting Times Statistics

We will be collating and commenting on key aspects of NHS performance, including hospital waiting times. This page shows the results for April 2011.
Blog

18 week performance is a function of how resources are used to meet demand. To gain a fuller picture of movements/variation in these measures it would be useful to understand demand. Rationing of demand by PCT's until April 2011 may mask 18 week performance. Then what happens?
1) The 18 week target is indeed no longer enforced centrally, but it hasn't actually been "abolished" because it lives on in the NHS contract... for the time being at least... and in the NHS Constitution.

2) Why is the Department monitoring the median waiting time? The 50th centile is too close to the urgency rate in some specialties to be useful. The mean waiting time would be better, as it indicates whether the backlog is growing relative to demand. (The 95th centile measurement, on the other hand, _is_ a valuable indicator of longwaits.)

3) The overall figures, helpfully tracked here, comprise astonishing variations around the country and between specialties. In the hardest-pressed cases there are even grounds for concern that clinical priorities might be squeezed in the effort to achieve 18 weeks. In other cases, 18-week failure is likely to be down to poor scheduling practices rather than a large waiting list.
Waiting times are affected by a number of issues all of which are likely to require improvement. Target for cancers have been in place for sometime leaving elective cases to managed withing 18 wks total. better ways of working, managing demands on services, working with good clinical guidelines would all help redcue waiting times.
I have been waiting for a gallblader removal operation since July 2010, been admitted to hospital 3 times since gravely ill, it is now almost february 2011 and I am still waiting, tried everything to gee them up, I get false promises but nothing happens, feel terribly let down and wonder when its ever oing to happen, this is over 28 weeks now never mind 18 weeks.
I was first referred in January 2013 and admitted for a double bunionectomy in November 2013. Only one foot was done and I was told 4 to 6 weeks for the other. Eventually I was told June 2014 for the continuation of the job, this did not happen. I failed to get an answer from the bookings so contacted Patient Support who told me it was a 52 week waiting list so it appeared that I had been put back to the bottom of the list despite the original agreement with the surgeon. I was offered as date for Dec 7 2014 for the second foot but this was postponed on the 6 Dec since when I have heard nothing. I have been given no update on the situation or an alternative option. So much for patient charter etc.

‘Despite a mild winter, today’s figures reveal a hidden crisis in hospitals up and down the country,' says Deborah Ward, Senior Analyst at The King’s Fund.
Press release