The diagram below shows the main external pressures and internal factors that drive reform in health organisations, as described in our paper, Reforming the NHS from within. Click on the different factors to find out more about each approach and access case studies from around the world. 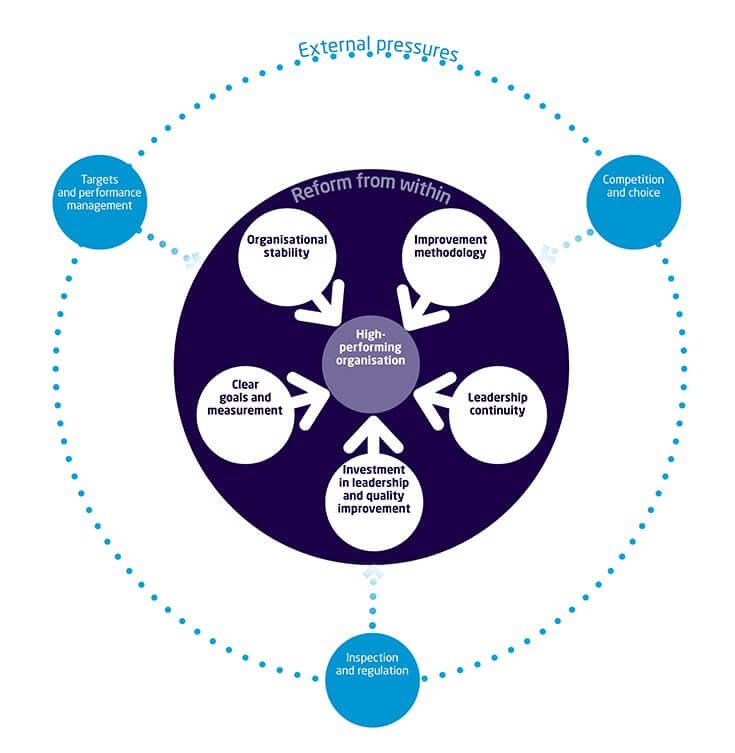 Targets and performance management were used under the Blair and Brown governments to tackle some of the negative impacts of the long-term underfunding of the NHS, which had resulted in very long waiting times and patient outcomes that compared poorly with other countries..

There is clear evidence that the targets and performance management approach contributed to improvements in NHS performance.

But there were also some negative consequences. These included evidence of gaming and, in some cases, misreporting of data to avoid penalties and sanctions under the performance management regime. At its worst, performance management has the effect of disempowering those working in the NHS and creating an over-reliance on central guidance.

More on targets and performance management

For example, at Virginia Mason Medical Center, hundreds of staff were trained in methods of quality improvement in which there was a strong focus on identifying and tackling variations in care and developing ‘standard work’.

At Jönköping County Council, work on quality improvement initially benefited from involvement with the Institute for Healthcare Improvement (IHI) in the Pursuing Perfection programme. Through this programme, leaders adopted a methodology for quality improvement and applied this to services in the county’s three hospitals and 34 primary care centres. Building on this experience, Jönköping established its own in-house centre for learning and improvement known as Qulturum. This centre delivers education, training and learning in quality improvement to the county council’s staff, drawing on links with international experts.

Greater competition and choice was one of the main approaches used by successive governments from the early 2000s to deliver improvements in the NHS. These reforms were designed to create stronger incentives to improve performance within the NHS and to reduce reliance on top-down targets and intervention by regulators and inspectors – the philosophy being to enable the NHS to become a ‘self-improving system’.

The evidence on what greater competition and choice achieved is contested. Studies of the internal market in the 1990s concluded that their impact was limited because the incentives were too weak and the constraints too strong.

More on competition and choice

Investment in leadership and quality improvement

Transforming the NHS depends much less on bold strokes and big gestures by politicians than on engaging doctors, nurses and other staff in improvement programmes. NHS organisations need to prioritise leadership development and training in quality improvement methods; this is best done in-house rather than through national agencies.

The Blair Labour government set up new systems of inspection and regulation alongside introducing targets and performance management to deliver NHS improvements. A succession of regulators-cum-inspectors was established.

The evidence on the impact of inspection and regulation is difficult to interpret, mainly because of frequent changes in the organisations responsible for carrying out this work and in the methods they use. There are some clear examples of regulatory failure during the reform period, concerning NHS providers such as Stoke Mandeville Hospital, Maidstone and Tunbridge Wells NHS Trust, and Mid Staffordshire NHS Foundation Trust, where there were serious shortcomings in patient care despite visits by the regulators.

More on inspection and regulation

An important factor in achieving reform from within is the development of a culture of measurement and reporting at all levels to support performance management.

Leadership continuity is an important factor in high-performing organisations. For example, Canterbury District Health Board benefited from a continuity of leadership that contributed towards its success.

Closer to home, Salford Royal NHS Foundation Trust - widely acknowledged to be a high-performing organisation, and with one of the highest levels of patient satisfaction - has benefited from continuity of leadership and consistent pursuit of its vision to be a safe and high-quality provider of care.

Much greater leadership continuity will be needed in NHS organisations to support new styles of leadership, with a focus on the development of leaders at all levels.

Our paper argues for a fundamental shift in how the NHS is reformed, learning from what has worked (and what has not) in England and elsewhere.
Completed project

Did not the Virginia Mason Institute badly fail an inspection by the American Government at their flagship hospital in Seattle USA ?

Just a thought if the Virginia Mason Institute "Lean Medicine"theory is based on the Toyota Lean Car Production Methods did not Toyota have to recall 11.5 million cars last year ?
but then I suppose it is easier to recall a car than a hospital patient.