This short overview has been developed to further explore the themes around management and leadership in the NHS.

It is difficult to establish historical trends in the number of non-clinical managers employed in the NHS as the definition of a managerhas changed over time.

Earliest workforce data from The Office of Health Economics shows that in 1951 there were 29,021 administration and clerical staff, including general and senior managers. This made up about 7 per cent of the total workforce. 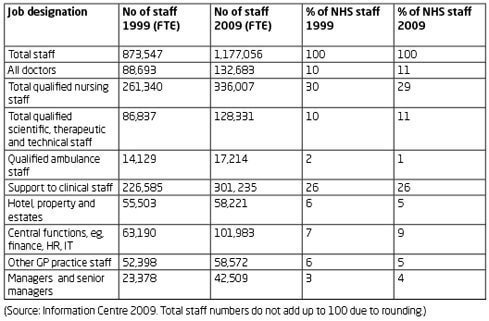 How many managers is 'too many'?

The NHS Confederation, in its report, Management in the NHS: The Facts, argues that the proportion of NHS managers is relatively low given the size of the organisations that they run. They point out that it is lower than the proportion of managers in the whole of the workforce in the UK (NHS Confederation 2007), which in 2009 was 16 per cent (Office of National Statistics 2009).

Who can be considered an NHS manager?

The NHS Careers website lists 78 categories of manager, including clinical management, human resources management, IT and financial management. There is no data available to show which of these broad categories of management has seen the most growth. Recent reforms to the NHS, including delivering waiting time targets, changes to the hospital payment system (payment by results), the electronic booking system (choose and book) and other IT projects, are likely to have increased the need for managers in hospital trusts.

Why has the number of managers increased?

For primary care trusts (PCTs), the recent Health Select Committee Report into Commissioning identified a continuing rise in administration costs dating from the purchaser-provider split in 1991 and was critical of the government's inability to supply 'clear and consistent data about transaction costs' relating to billing and commissioning.

The regulatory framework for health care in England has also become more complicated. A report in 2009 by the Provider Advisory Group, made up of NHS and independent sector providers, concluded that there was unnecessary duplication in the information NHS providers in England are required to submit to the 35 key regulators, auditors, inspectorates and accreditation agencies. Supplying this information has led to an increase in the number of non-clinical staff employed by the NHS.

What do managers in the NHS think of the current situation? Do their roles and responsibilities reflect the leadership needs of the NHS? We spoke to some managers to find out more.

The changing role of managers in the NHS

This short overview has been developed to further explore the themes around management and leadership in the NHS.

The future of leadership and management in the NHS: No more heroes

What sort of leaders does the NHS need? Does the 'hero' chief executive still hold sway? This report concludes the findings of the Commission into leadership and management in the NHS.

While the NHS is making progress on closing some race inequality gaps, there is room for improvement. Habib Naqvi discusses opportunities to support work around the Workforce Race Equality Standard.
Press release

'By shutting out overseas staff, the government has increased the pressure on itself to urgently develop and fund reforms' to the care sector: The King's Fund responds to new immigration rules

Suzie Bailey, Director of Leadership and Organisational Development at The King’s Fund, comments on the new list of occupations eligible for the health and care visa.
Blog

A hopeful moment? Addressing race inequalities in the NHS workforce

The historical issues of institutional racism in the NHS have been brought sharply into focus by the Covid-19 pandemic and the recharged Black Lives Matter movement. Shilpa Ross outlines findings from our research into inequalities in the NHS and calls for action and allyship from white colleagues.