The NHS in England plans to spend £102.6 billion in 2009/10, rising to £109.6 billion in 2010/11. These cash increases of 6.7 per cent in both years are equivalent to 5.1 per cent and 3.9 per cent respectively in real terms after taking account of inflation in the economy as a whole (using the latest GDP deflator from the Treasury). 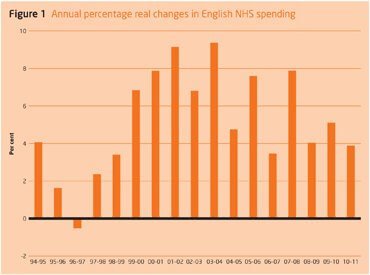 As this year's Operating Framework confirms, the increase in average allocations to PCTs – which hold just over 80 per cent of the total NHS budget – will be 5.5 per cent for 2009/10 and 2010/11. This is just over 1 per cent less than the increase for the NHS as a whole and reflects monies yet to be allocated and changes in budgets managed by the Department of Health. Taking general inflation into account it is equivalent to a real rise of 3.9 per cent next year and 2.7 per cent in 2010/11.

How the total PCT allocation is to be shared out will depend on the weighted capitation formula. Last year was the 30th anniversary of the implementation of the Resource Allocation Working Party’s (RAWP) formula for sharing out the NHS budget. While the objectives of the formula remain – to provide PCTs with budgets that will enable them to commission similar levels of health care for populations with similar health care need, and to reduce avoidable health inequalities – for next year’s allocation it has changed again, with significant implications for future PCT budgets.

The numerous changes that have been made relate to the formula itself and also to the sources of information on PCT populations have been published by the Advisory Committee on Resource Allocation. Some key changes are noted below.

Some key changes to the weighted capitation formula for 2009/10 onwards:

The weighted capitation formula is one of the most sophisticated methods for allocating public funds anywhere in the world. One of the downsides of this is that while it has a major impact on how much is spent in different areas of the country – Manchester gets over twice the funding per head of population than Oxford, for example – there is little public understanding of the technicalities of the formula or the value judgements that need to be made in deciding what should be the appropriate degree of variation in funding between PCTs.

While ACRA provides independent analysis to the Department of Health and ministers – based on academic investigation and evaluation – ultimately the decision about which formula to employ – out of many possible ways of allocating the NHS budget – is a matter for ministers. Greater openness and clarity – for example, publishing competing methods and their impact on budgets – would help inform more public debate about government allocation policy.

Perhaps most importantly, while PCTs receive allocations in large part determined by the weighted capitation formula there is little or no obligation on their part to spend their budgets in line with the factors and elements which determine their budgets in the first place. Even after thirty years of moving billions of pounds around the country there remains a significant question as to the extent to which this policy has met its declared objectives of ensuring those in equal need have equal access to care and, more recently, that avoidable health inequalities are reduced.

First, the new formula has changed PCTs' target or 'fair shares' allocations – the notional amounts they should receive to meet their populations' health care needs. The target allocation is based on PCTs' population sizes and composition as well as factors which reflect need for health care – such as mortality rates and socioeconomic factors. Comparing the target allocations under the old formula this year with those calculated under the new formula for 2010/11 reveals that all PCTs except one will see a cash increase in their target allocations. However, this is to be expected as the total NHS budget has increased. Allowing for this general growth, some PCTs will have below average and others above average increases – and one, Kensington and Chelsea, will see their target fall in relative terms by over 15 per cent. Figure 2 shows these relative changes having taken into account an average overall rise in the target allocation of 13.8 per cent between this year and 2010/11. 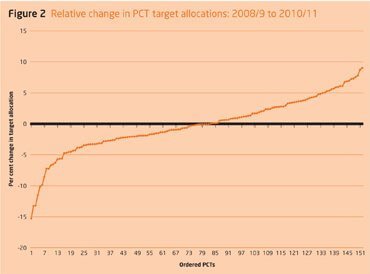 Second, while PCTs' target allocations have changed, so too have their actual allocations. Actual budgets and hence the 'pace of change' towards target allocations are decided by the Secretary of State and do not necessarily follow the changes indicated by the weighted capitation formula. Over the next two years many PCTs will recive a minimum increase of 10.6 per cent. Around 90 per cent of PCTs will receive an increase of between 10.6 per cent and 12 per cent, with Bassetlaw PCT receiving the biggest boost – over 17 per cent . These increases bear only passing resemblance to the amounts PCTs should receive under the new formula.

Despite these differential increases the gap between actual allocations and the fair shares target (distance from target - DFT) will have changed in 2010/11. In 2008/9, DFTs ranged from -3.7 per cent  to +13 per cent. But in 2010, given allocations announced by the Operating Framework and the targets determined under the new formula, the range will be -6.2 per cent to +23.4 per cent. In other words, some PCTs are now judged to have nearly a quarter of their target allocation too much given their population demographics and populations health care needs and some around 6 per cent less (see figure 3 and table 1). 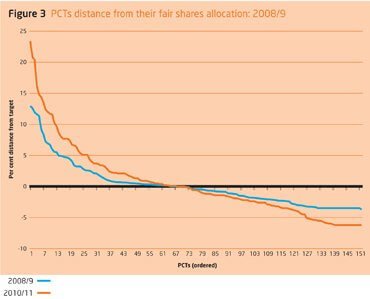 For some PCTs the change has been significant. Heart of Birmingham PCT, for example, has moved from being 3.5 per cent under target (and hence expecting higher than average allocations in the future in order to catch up) to 10.2 per cent over target – and therefore facing the prospect of losing money over time relative to other PCTs.

However, while the new weighted capitation formula has altered PCT target allocations there is little prospect of their actual allocations moving towards target over the next few years. With small increases in the total NHS budget for the next two years and even smaller increases likely up to 2014/15 it will be very hard to find the financial scope for any significant redistribution of budgets between PCTs. With overall budget increases for the NHS post-2010 likely to be very small, there will be little scope to move PCTs towards their target allocations without potential disruption to services in 'overprovided' areas which need to lose money to other parts of the country assessed to be underprovided.

Published in The King's Fund news in context, December 2008