The government’s NHS reforms were meant to devolve power away from Whitehall. In practice the health service remains one of the most centralised in the world. Bottom-up change is urgently needed.

NHS reform has relied too much on external pressures such as targets, inspection and competition, and too little on building capabilities for improvement from within. Despite Andrew Lansley’s attempt to distance ministers from involvement in the day to day operations of the NHS through the Health and Social Care Act 2012, performance management and regulation of NHS organisations is stronger than ever. The consequence is that England’s health care system is one of the most centralised in the world, vulnerable to frequent changes in policy and damaging top down structural reorganisations.

Politicians’ role in the running of the National Health Service (NHS) needs to be better defined to counter interventionist and centralising tendencies that have hampered effective reform to date, says a new report by The King’s Fund.
Completed project

The Barker Commission answered the question of whether having separate systems for health and social care is still fit for purpose.
Paid event

Reforming the NHS from within 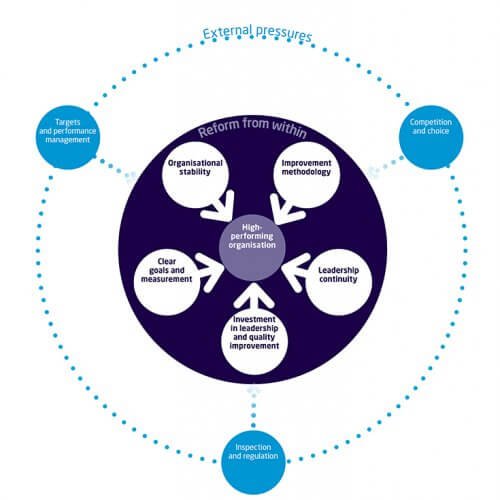