We start with a participant in one of our leadership programmes. The King’s Fund has a long history in staff development, which began in 1949 when it established a staff college for ward sisters that focused on methods of staff management and ward administration. By the 1960s the College was offering courses on subjects ranging from engineering to catering, and in 1968 it became the College of Hospital Management. 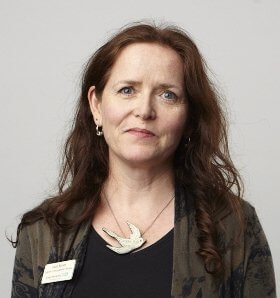 Leadership programmes as we recognise them today began in 1997, when a new change and leadership centre was set up ‘to contribute to contemporary thinking about change and leadership in health care’. The Athena programme – designed to support women to fulfil their potential as leaders – is one of the Fund’s longest-running programmes. Here we talk to Kate Bones, whose experience on the programme left a lasting impression.

Kate took part in the Athena programme 10 years ago, just after she became Director of Occupational Therapy and Recovery Practice at Sussex Partnership NHS Foundation Trust. She found that not only did Athena help her to step up into her new role, but the skills she acquired on the programme have continued to support her personal and professional development.

‘While I felt capable of taking on the challenge, [the role] was new territory for me so I sat down with my manager to talk about what I would need to develop into it. It was a trust-wide role, so whereas before I might have written a strategy for my department, I was now leading on strategy for the trust. I really had to think about the bigger picture, focusing on the next five years rather than just the next one or two.’

Kate didn’t want to ‘just listen to lectures about how to be a good leader’; she was looking for a more creative approach to development, so the Fund’s approach, which focuses on personal reflection and experiential learning rather than simply knowledge transfer, suited her needs. Another important criterion was a programme that could build on her own strengths. ‘In terms of my personal style, I think people feel like I’m approachable, engaged and responsive. But when it came to having an impact in senior, strategy-focused meetings, I often felt like I didn’t quite fit or wasn’t communicating in quite the right way to get my point across. I didn’t want to lose the pieces of me that make me a good leader, but I wanted to understand more about the parts which perhaps needed some polishing.’

‘When I started looking, there were lots of things out there, but I felt The King’s Fund had really identified a niche. [Athena] wasn’t just about individual development, it was about a group of women in senior roles. I thought it was something really quite different and once I’d found it, I kept going back to it.’

Immediately after completing the programme, Kate and others saw the impact of what she had learned. ‘I came away feeling much more confident about stepping into my own authority – and being OK with that – and feeling that I could be the expert. People told me after the programme that I was much more decisive and proactive and, as my career has progressed, I’ve held on to that learning.’

Ten years on, the Athena programme still resonates for Kate. ‘It was an inspiring programme, which allowed space for reflection and supported my personal growth; as well as giving me confidence, it helped me think about what I wanted to do in terms of my own personal development.’ Motivated by the coaching that was part of the programme, Kate undertook a coaching qualification and now coaches colleagues within the trust as well as some external clients.

One of the more unusual aspects of the way the Fund has developed over the years is that it has brought together the leadership development and policy strands of its work. The relationship between the two teams, based on sharing knowledge and skills, has become one of the Fund’s strengths. In the words of Marcus Powell, the Fund’s Director of Leadership and Organisational Development, it means that the leadership development team ‘understands the context, so we can help leaders to make sense of that broader picture – the regulatory environment, the political environment, the financially constrained environment’. Kate’s experience echoes this; ‘the facilitators [for Athena] were grounded in the reality of working in the NHS, understanding the world the participants were working in.’

As well as continuing to use the skills she developed on Athena, Kate also makes use of the Fund’s research and analysis work: ‘If I’m thinking about something or developing a strategy, often I’ll go onto The King’s Fund website to see if they’ve said anything about it... The Fund stimulates debates, it’s not afraid to have an opinion – and that way of challenging things was really appealing to me.’

The Athena programme is designed to support women to fulfil their potential as leaders. It has a particular focus on developing the personal, political and strategic awareness they will need to become successful.
Completed project

Leadership development courses: Programmes to support you at all stages of your leadership journey

Our leadership development courses support leaders in health and care.

’We’re here and you’re there’: lived experiences of ethnic minority staff in the NHS

Shilpa Ross explores some common experiences from our research into what it means to be an ethnic minority member of staff in the NHS.